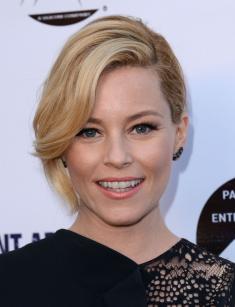 Elizabeth Banks is an American actress and director; her real name is Elizabeth Irene Mitchell.

The future star was born in February 1974 into the family of Ann and Mark Mitchell, the bank employee and a worker of General Electric. Elizabeth had three siblings.

The Mitchells lived in Pittsfield, Massachusetts. The girl took an interest in television early: the would-be actress participated in a game show on the Nickelodeon channel. From that time, Elizabeth dreamed of working in front of cameras again.

In 1992, Banks graduated from school and continued her education in University of Pennsylvania until 1996. She was the first in her family who received higher education. However, the young woman still cherished the childhood dream about television and studied drama at American Conservatory Theater. In 1998, she got a Master’s degree and went to New York.

As Elizabeth moved, she started building her career: she appeared at the theater stage and then conquered the world of cinematography.

Elizabeth Banks debuted in the movie Surrender Dorothy; she was credited as Elizabeth Casey there. Later, to avoid confusion with another famous artist Elizabeth Mitchell, the actress took a stage name “Elizabeth Banks”. The successful beginning led to new offers from directors. Soon, Banks got a secondary role in Heights and Spider-Man 3; the more significant role in the comedy Wet Hot American Summer followed.

2005 was marked with the break-through in the artist’s life: she appeared in two high-grossing projects, The Baxter and The 40-Year-Old Virgin. The latter movie was particularly successful, and the cast including Elizabeth Banks became famous.

The next triumph moment happened after the actress’s appearance in the popular show Stella and the series Scrubs where Banks played Dr. Kim Briggs. It was a great hit; several new seasons of Scrubs followed, and Elizabeth looked brilliant in all of them.

The attempt to change the stage type from comedies was successful: Elizabeth appeared in The Uninvited and W. The former is a thriller and the remake of the Korean horror under the same title. The latter project by Oliver Stone is a biography about the family of the American President George W. Bush; Elizabeth played his wife, Laura.

In 2010, the actress participated in nine episodes of the sitcom 30 Rock and personified the friend of the main character (Jack Donahue).

Nowadays, Elizabeth Banks continues to be a popular actress. The movies Definitely, Maybe and Role Models are the brightest among the actress’s recent works.

In 2012, the woman joined the cast of the movie The Hunger Games. This project revived the artist’s fame: the whole world spoke about her.

Elizabeth started dating her future husband Max Handelman when she was a college student; the relationship lasted for many years until the couple married in 2003. The woman converted to Judaism for her husband.

Today, Elizabeth is happily married to Handelman; they have two sons, Magnus Mitchell and Felix. The boys were born in 2011 and 2012 by substitute mothers.

Elizabeth and Max own a business together: they opened a producing company Brownstone Productions.

Banks frequently appears in photo sessions for various magazines: for example, in 2015, she collaborated with Flaunt and Los Angeles Times. Fans may follow the actress’s new pictures on Instagram.

Many Internet users compare Elizabeth Banks’s and Rachel McAdams’s appearance: they bear much resemblance to each other. However, the actresses are not related.

In March 2017, a new project with Elizabeth Banks, Power Rangers, came out. In November of the same year, the movie Pitch Perfect 3 was released.

In 2017, Banks accused the famous director Steven Spielberg of sexism at Women in Film Crystal + Lucy Awards ceremony. When she was delivering an acceptance speech, she said that Spielberg had never made women his main characters.

“I went to Indiana Jones and Jaws and every movie Steven Spielberg ever made, and by the way, he’s never made a movie with a female lead. Sorry, Steven. I don’t mean to call your ass out, but it’s true”, the actress marked.

Later, she apologized for what she had said. Fans remembered a famous movie The Color Purple starring Whoopi Goldberg.

Banks posted her apology on Twitter; she also offered an apology to everyone who felt offended by her comments at the ceremony.

In March 2017, the artist surprised fans by her outfit during the premiere of the fantastic movie Power Rangers: she was wearing a blue Zuhair Murad overall with a low neckline and black bow belt. In addition, the woman had an Edie Parker clutch and Charlotte Olympia black pumps. People appreciated the gorgeous clothes and marked its originality that suited the actress.

In 2016, Elizabeth compared Donald Trump, the then candidate for the presidency from the Republicans, to her character, Effie Trinket, from The Hunger Games. Effie can hardly be called the example to follow from the moral point of view. The actress said that Trump was similar to Trinket because the politician, in her opinion, had few positive qualities.

Banks openly supported Hillary Clinton, the candidate from the Democrats. She commented on Trump’s speech in July 2016 in Cleveland:

“I don’t usually say this about Donald Trump, but that was over the top. <…> Some of you know me from The Hunger Games, in which I play Effie Trinket — a cruel, out-of-touch reality TV star who wears insane wigs while delivering long-winded speeches to a violent dystopia. So, when I tuned in to Cleveland last week, I was like, ‘Hey! That’s my act”. 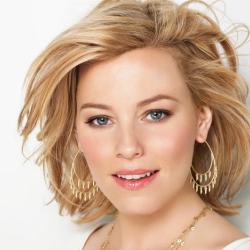