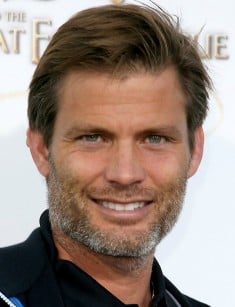 American actor Casper Van Dien had been on the way to the movie stardom for seven years before he became famous. The man of model appearance became well-known for the leading role in the sci-fi movie Starship Troopers. During his acting career, Casper also managed to try his hand at producing and screenwriting, and even at directing.

The actor was born in Milton on December 18, 1968. There is a tradition in the family that the first-born boys have the same names. The future actor was the eleventh Casper in the dynasty. He also had three sisters.

Van Dien is a descendant of an old Dutch family long settled in the New York area. Even the street on which the actor's family lived was named after one of his glorious ancestors.

The mother worked as a nursery school teacher. Like two grandfathers, the father served in the navy and was a U.S. Navy Commander. Casper was also going to devote his life to the navy, so upon graduation from high school he entered the Admiral Farragut Academy, and then became a student at Florida State University, but he did not graduate from it.

The desire of the heir to become an actor shattered the parent's dreams of continuing the Marine tradition. Van Dien went to Los Angeles. Casper was nicknamed Ken, a friend of the Barbie doll, because of his handsome face and beautiful body at school. The attractive appearance was his lucky ticket to the modeling business and advertising, where film directors noticed him.

He began an acting career with bit parts in movies and TV series. Casper Van Dien appeared in seven episodes of the television project Beverly Hills, 90210, which was popular with young people in the early 1990s, in the TV series Dr. Quinn, Medicine Woman and Married... with Children, in a few soap operas, including One Life to Live.

The young man inched toward the big movie. In 1997, Casper was lucky because he was invited to play a leading role along with beautiful blonde Denise Richards in the thriller Starship Troopers.

The story was based on the novel of the same name by writer Robert A. Heinlein, and the director was Paul Verhoeven. This fantasy film tells about the space war between the inhabitants of the Earth and the spider-like aliens. John Rico (Casper) rallies to the defense of humans as a member of Starship Troopers.

The film managed to exceed the budget significantly, as well as win the Academy Award for Best Visual Effects and the Saturn Award. After the release of Starship Troopers, the name of Van Dien became well-known in every corner of the world, and the directors were happy to offer him the leading roles. The next work in the cinema was the comedy scary movie Modern Vampires, in which Casper portrayed a vampire.

The actor was lucky to play Tarzan in the film Tarzan and the Lost City, which was shot by Carl Schenkel. Jane March was his partner in the movie.

The artist finished tthe 20th century triumphantly. Casper was cast in Tim Burton's gothic horror film Sleepy Hollow. He got the role of Brom Van Brunt, and his colleagues on the set were Johnny Depp, Christina Ricci, Miranda Richardson, and other celebrities. This work has also contributed to his success.

Many of the movies in which Casper appeared at the beginning of the 2000s did not have a bit budget. The man starred in the films Danger Beneath the Sea, Maiden Voyage, Dracula 3000. Every year several films with his participation were released.

In 2008, the actor appeared as Colonel Johnny Rico again in the sensational saga Starship Troopers 3: Marauder. Then he brilliantly played detective Jack Barrett in the action movie Mask of the Ninja, where the murder investigation turned into a mysterious war.

Over the last years, the actor has filmed actively. In 2013, he even replaced Matt Mullins in the web series Mortal Kombat: Legacy, based on the computer game Mortal Kombat.

Casper tried his hand at other activities. The man was the director of the movie Sleeping Beauty (2014) and wrote its script. Van Dien also directed the film Patient Killer (2015).

The filmography of Casper Van Dien also includes a project created by the Americans together with the Russian filmmakers. The actor appeared in the action movie Showdown in Manila (2016). Alexander Nevsky played a leading role in the film, and he also was a producer.

Casper Van Dien has many children. He has been married twice. For the first time, the man married in 1993. His wife was actress Carrie Mitchum, who gave birth to two children. The first heir, naturally, was named Casper, and his daughter is Grace. The couple failed to save the marriage and divorced four years after the wedding, but the actor and his first wife are still friends.

The second wife was Catherine Oxenberg. She is also an actress of royal descent because the woman is the daughter of Princess Elizabeth of Yugoslavia. The wife was seven years older than Casper, but this did not prevent the famous couple from living together for 16 years.

Casper’s official Instagram page is full of photos in which he appears with a woman.

The actor told journalists that immediately after the divorce, he began dating a beautiful brunette named Jennifer Wenger. He calls her a bride and is going to marry in June 2018.

“I am grateful to fate that I met my love. Jennifer is very gentle and soft-hearted. My children got along with her at once. They communicate perfectly,” the man said.

In May 2018, the actor went to Moscow to shoot in the film Oracle: Go Blind, directed by Alexander Izotov. The film will tell about the work of Russian and foreign special services. The creators needed a hero with an American accent, so Van Dien got the role of Lieutenant Colonel of the FSB.

The actor will show the best character traits of a Russian person. Casper’s partners on the set were Aleksey Chadov, Marat Basharov, Aleksandr Golovin, Eric Roberts.

At the end of the year the fantasy action movie Alita: Battle Angel, shot by the Japanese and Americans filmmakers and based on Yukito Kishiro's manga, is scheduled to premiere. Rosa Salazar, Christoph Waltz, Ed Skrein and other movie stars also play in the film. 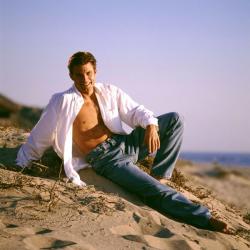