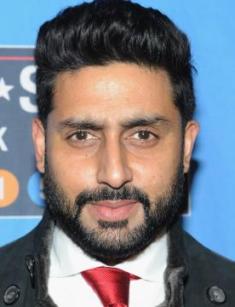 Abhishek Bachchan is an Indian actor, Hollywood star who won the title of the sexiest Asian male, according to the British newspaper Eastern Eye.

The real surname of this star of Asian movies is Srivastava. Honoring his family tradition and following in his father's, Amitabh Bachchan's footsteps, the young man took the already known pen name. His mother, Jaya Bachchan (ńee Bhaduri), and father are also well-known actors in India. That's why Abhishek did not have to think twice when it came to choosing a career path. However, at first, the young man had aspirations of becoming an economist.

The future actor was born on February 5, 1976, in Bombay (present-day: Mumbai). The family was already raising his older sister, Shweta. Abhishek was born under the zodiac sign of Aquarius. Bachchan went to school in his home town. The first years of studying did not come easy for the little boy because he struggled with dyslexia. Nevertheless, having enough determination and will, Abhishek dealt with his condition.

After moving to Delhi with his parents, the young man continued his education and received higher education in Switzerland. At Boston University, the young man began to study Economics but then changed his mind in favor of acting. This decision did not please his parents, but they did not prohibit Abhishek from doing as he pleased.

His debut in cinema took place only in 2000 when Abhishek was already 24 years old. But the first role in the drama Refugee brought the aspiring actor success. Abhishek Bachchan's brilliant appearance with a height of 6 feet 10 inches and a weight of 171 pounds, his athletic figure, charming smile, and expressive voice made it possible for the public to notice the guy instantly. This inspired Bachchan, and he continued his career in film. However, subsequent projects were not as successful. In three years, 17 movies in Abhishek's filmography were failures.

This did not break the desire of the actor to conquer the Olympus of Bollywood; on the contrary, it made him improve his acting skills, wishing to achieve the goal. And Bachchan Jr.'s perseverance was rewarded. 2003-2004 was a turning point in the creative biography of the actor. His two roles in a row, in the movies I am crazy about Prem and Yuva, were appreciated by the audience and critics. The latter one helped Abhishek win Indian film awards.

In 2004, Abhishek received the leading role in the action movie Dhoom, which became the leader at the box office. The actor proved his skills again while working on the adventure comedy Bunty Aur Babli (2004). On the next project, Abhishek worked together with his father. The movie Sarkar not only brought a good box office income but also received praise from movie critics, as well as the award of the Indian Film Institute.

The actor repeated the success with a role in the thriller Dus, which also received significant cash fees. In 2006, the drama Kabhi Alvida Naa Kehna (translated as "Never Say Goodbye") with his participation managed to collect the largest box office in the history of Indian movies outside India at that time. And in 2006, the sequel to Dhoom confirmed the actor's status of a new Bollywood star.

The year 2007 is marked in the filmography of the actor by the release of the drama Guru. The next work in a melodrama failed in India but was warmly received in the UK. 2008 reunited the father and his son Bachchan again on the set of a crime drama called Sarkar Raj. On this project, Abhishek worked with his wife, Aishwarya Rai.

In the same year, Abhishek became successful playing a part in the romantic comedy movie Dostana. The next picture Delhi-6 again became a failure in Bachchan's career, but he managed to restore his fame, acting as a producer and performer of one of the roles of the drama Paa, where he again starred with his father. This movie was recognized as the best in 2009, shot in Hindi.

2010 again brings together Abhishek and Aishwarya Rai in a joint project. Two celebrities starred in Raavan, in which Bachchan got the role of the main negative character. In 2011, the actor's track record was supplemented by the action movie Game and the crime drama Dum Maro Dum, which received praising reviews from the audience and good box office. Co-performed in the movie, the song of Abhishek and Aishwarya became a popular video.

In early 2012, the action movie Players was released. The remake of the famous Hollywood movie The Italian Job was filmed in India, Russia, New Zealand, and even the North Pole. For the first time in the history of Bollywood, Indian filmmakers worked in such harsh conditions.

The comedy of 2012 Bol Bachchan secured for Bachchan Jr the fame of a charismatic actor who was equally able to perform any role on the screen. The action movie Dhoom 3 (2013), with the participation of the actor, became one of the most expensive Bollywood projects. At the same time, the movie managed to get into the list of the highest-grossing Indian motion pictures.

In 2014, Abhishek's filmography was expanded with the action movie Happy New Year, and in 2015 with the comedy-drama, All Is Well, in which he appeared in an acting duet with Rishi Kapoor. Remaining faithful to this genre in 2016, the actor played a role in the movie Housefull 3, in which he played with Akshay Kumar.

Although back in 2006, the British newspaper Eastern Eye called Abhishek Bachchan "The Sexiest Asian Man", and the newspaper Times of India even titled him as the most interesting Indian groom, the actor at one time could not establish personal life and get a family and children.

Abhishek was in love with actress Karisma Kapoor, and the young people even got engaged at some point. However, the wedding never took place. In four months, they broke off the engagement. According to one version of their separation, Amar Singh, a close friend of the Bachchan family, is to blame for the break-up. Others talked about the condition that Karisma, as a future wife, had to give up the movie career after the wedding.

In 1997, Abhishek Bachchan met Aishwarya Rai. But they became close only on the set of the action movie Dhoom 2. However, at the time, an affair between him and Miss World 1994 was impossible, because they both were seeing someone, but felt this chemistry. The further collaboration brought the young people closer together, and their relationship ended with a lavish wedding on Valentine's Day in 2007. The cost of the celebration amounted to $900 000, turning the wedding ceremony of the actors into the most expensive wedding in Bollywood.

More than four years later, on November 2011, the star couple had a long-awaited child, Aaradhya. All the numerous relatives adore the baby on the father and mother's side. Although there are constant reports in the media that the star couple is on the verge of divorce or has already divorced, Aishwarya and Abhishek still love each other. Photos of the happy family are continually flashing in the tabloids of India.

The couple is now involved in charity work for the children of India. Aishwarya, together with other members of the Bachchan family, built a school for girls from the most impoverished families, located in the village of Daulatpur in Uttar Pradesh. The school was named after the Indian beauty, the wife of Abhishek.

Abhishek Bachchan is a devoted football fan. The actor follows the games of the Indian national team and the football club Chennaiyin. Videos from the games and photos of the winners, as well as news from Abhishek’s life appear on the Instagram of the actor. The Bollywood star is also interested in playing cricket. In Twitter, the actor does not forget to congratulate his idol, Sachin Ramesh Tendulkar, on various occasions. The man is also called "The God of Cricket" in his homeland, even though the athlete has already ended his brilliant career.

Abhishek goes to many games that involve his favorite players with his family, charming Aishwarya, and Aradhya. The actor himself is always ready to spend a day on the football field, chasing the ball with his friends.

Before the 2018 World Cup, Abhishek, along with colleagues Ranbir Kapoor, Anushka Sharma and her cricketer husband Virat Kohli, arranged a friendly game in his native Mumbai. For sports, Abhishek chooses a brand of Nike shoes, advertisements of which he places on social media pages.

As of 2019, Abhishek Bachchan has a net worth of $30 million. In 2017, Abhishek Bachchan purchased a house in Dubai for the family. The luxurious mansion was created according to the sketches of the design firm Shaikh Holdings. The interior of the rooms harmoniously combines national ornaments and high-tech style. The house has several bedrooms, bathrooms, a living room with a high tier, a spacious dressing room.

In 2017, Abhishek starred in the political crime drama Sarkar 3, where his dad Amitabh Bachchan played along with his son. The movie was about the character Subhash Nagre "Sarkar," who had to confront enemies and defend the right to security. But one day, a young woman who wants to avenge the death of her father begins to act against him.

Now the movie Dostana 2 is being prepared for release, in which, together with Abhishek Bachchan, the leading roles were played by John Abraham, Riteish Deshmukh, and Dino Morea. Due to the participation of so many Bollywood stars and beauty Priyanka Chopra, the premiere of the comedy is eagerly awaited in India and other countries of the world.

Another work to which Abhishek Bachchan gives most of his time and attention is the leading role in the drama Gulab Jamun. The date of the premiere of the movie is still unknown.