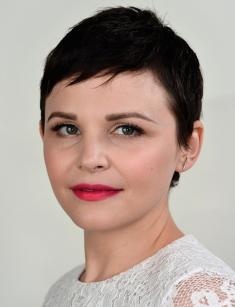 Chubby, green-eyed Ginnifer Goodwin that looks something like Selena Gomez became famous for Mike Newell's drama Mona Lisa Smile. The role of a college girl, in whose soul Julia Roberts' heroine tried to plant the seeds of feminism, made the actress recognizable, and further movies contributed to her world-fame.

The actress’s real name is Jennifer Michelle, and "Ginnifer" is a pronunciation variant of the first name in her regional dialect. So, it later became a stage name. The girl and her younger sister Melissa were born in Memphis in a Jewish family. Father Tim owned a recording studio, mother Linda was a homemaker and looked after the children. When the girls grew up, the woman began to work for FedEx, then transferred to Apple.

Ginnifer had many hobbies: ballet, figure skating, horse riding. That is why when the actress evaluates her appearance Ginnifer says that she doesn't like her legs because she built up strong hip muscles making all these breathtaking jumps in figure skating.

The girl’s main priority was the cinema. Goodwin became interested in the drama class, and after graduating from high school, she entered the Boston University College of Fine Arts.

After receiving a bachelor's degree, Ginnifer went to England to study at London's Royal Academy of Dramatic Art. While studying at the academy, the future actress participated in theatre productions, played Ophelia and Jessica in Shakespeare's Hamlet and The Merchant of Venice. When she returned to Boston, Goodwin joined the Huntington Theater Company.

Ginnifer made it into the big screen when she moved to New York City. At first, she got bit parts in the popular police procedure Law & Order, the series Ed about a lawyer who quitted successful career and started a new life after his wife’s betrayal.

She made a breakthrough in her acting career starring in the 2003 melodrama Mona Lisa Smile with Julia Roberts and Kirsten Dunst. The film told about the American women’s struggle for their rights in the 1950s.

After the success of the feminist film, Ginnifer got the role of the title character’s girlfriend in the comedy Win a Date with Tad Hamilton!. There were rumors that the performer of the leading role (Topher Grace), with whom the actress had a love affair, spoke for her with the director.

Goodwin played the first wife of country star Johnny Cash in the biographical film Walk the Line. Reese Witherspoon won the Academy Award for the role of the second wife, and the film received three Golden Globe Awards and the Screen Actors Guild Award.

She became even more popular starring in the series Big Love about the Mormon family who practices polygamy. Ginnifer appeared as the third wife of the hero, Bill Paxton.

Goodwin rose to fame playing the leading role in the comedy He’s Just Not That Into You. The actress worked with Ben Affleck, Drew Barrymore, Bradley Cooper. In 2009, the drama A Single Man directed by designer Tom Ford was also released.

The movie about the same-sex couple received positive reviews and about fifty different nominations, and the leading actor, Colin Firth, was first nominated for the Academy Award.

In Something Borrowed, Ginnifer portrayed a modest girl, Rachel, who seduced the groom of a close friend. Kate Hudson played the role of her friend, and Colin Egglesfield appeared as the unfaithful man, Dex Thaler.

In 2011, two films with similar titles, Take Me Home and Take Me Home Tonight, were released. Goodwin starred in the second film, which also featured Topher Grace and Chris Pratt.

The young woman created the image of the first lady, Jacqueline Kennedy, in the film Killing Kennedy, showing the death of the 35th President of the United States. The drama film was nominated for the Critics' Choice Television Awards, the OFTA Film Award, the Screen Actors Guild Awards, and three Primetime Emmy Awards.

For six years, Ginnifer appeared as Snow White in the fairy-tale world and teacher Mary Blanchard in the modern world in the series Once Upon a Time.

Goodwin had the romantic relationship with actors Chris Klein, who played the leading role in American Pie, and Joey Kern. The actress even became engaged to the latter, but they did not marry.

The on-screen love of Snow White and Prince Charming in Once Upon a Time turned into a real relationship. In April 2014, Josh Dallas became Ginnifer’s husband, and in May, the couple had their first baby, Oliver Finlay.

The young people invited only relatives and close friends to their Jewish wedding. In June 2016, the youngest son, Hugo Wilson, was born. The actress wants to have a large family and says that they will have as many kids as they want.

Goodwin did not worry about her figure before and after the birth of children. There are a lot of photos in tabloids and on Instagram fan accounts, depicting the young woman who gained weight.

By her own admission, from childhood, Ginnifer has been a little bit stout, and she was even a member of an organization whose members tried to lose weight naturally. Over time, she began to follow her mother’s advice to listen to her body, and the woman has adopted the vegetarian diet. Besides, Goodwin trains at the West Valley City Family Fitness.

Ginnifer calls herself a woman of color, in other words, she chooses bright clothes because she is cheerful, and colors enhance her mood.

The actress regularly appeared in six seasons of the fantasy series Once Upon a Time, and in 2016 left the project. In February 2018, Entertainment Weekly published information that the series with 156 episodes was coming to an end.

The creators said that no matter how sad it was such steps were right. The last episode is titled "Leaving Storybrooke." Fans had the opportunity to see the original cast again, including Ginnifer Goodwin.

Viewers will see the favorite actress in the new family comedy Steps about the lives of four people who are forced to live almost like a Swedish family. The story revolves around Goodwin’s heroine named Bea, her husband Paul, her ex-husband, and Paul’s ex-wife.

Fans can find nude pics of Ginnifer Goodwin on the Internet as she has sometimes appeared in sex scenes (Big Love). There are also some sexy bikini photos that prove her beauty.