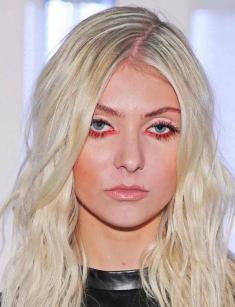 Taylor Momsen is an American actress and singer, the leader of the group The Pretty Reckless. She appeared in the series Gossip Girl and the movies How the Grinch Stole Christmas and Paranoid Park. Besides, the woman worked as a model for perfume and bag commercials; glossy magazines often publish her pictures.

Taylor Momsen was born on July 26, 1993, in St. Louis, the USA, into the family of Michael and Collette Momsen. The father was fond of rock’n’roll, and the daughter shared his passion since her childhood. Taylor has a younger sister, Sloane, who is an actress.

In one of her interviews, the singer told journalists about German roots from the mother’s side: her ancestors used to live in Odessa, the then Russian Empire.

Taylor grew up in a religious atmosphere. The girl went to a Catholic elementary school and continued her education at Herbert Hoover Middle School in Maryland. In addition, she attended the Center of Creative Arts in St. Louis and learned how to dance there.

Momsen entered the modeling business when she was only two years old; she had no choice. The parents signed a contract with a model agency, and little Taylor either studied at school or worked. The little girl had no friends or real childhood.

The would-be star appeared in a Shake 'n Bake commercial at the age of three. When she turned eight, Taylor wrote and performed the song “Blackout”. Later, the TV presenter Heidi Montag included it into her debuting album. Momsen gave harsh comments in her interviews and emphasized she had not sold the rights for the song.

In 1999, Taylor gained the first notable role in The Prophet's Game; the next year, the five-year-old actress personified Cindy Lou Who in the family comedy How the Grinch Stole Christmas; she surpassed more than 200 candidates.

2002 brought the movie Hansel & Gretel based on the Brothers Grimm’s fairytale; the girl gained the role of Gretel. Soon, she participated in Spy Kids 2: The Island of Lost Dreams and played the American president’s daughter.

In 2007, Momsen worked on the drama Paranoid Park. It is the story about a high-school student Alex and his life full of hardships. The boy’s parents do not understand each other and distance themselves from the teenager; skateboarding is the only passion of the young man.

Taylor received the part of Jennifer, the main character’s friend; she wants to lose her virginity and believes that Alex may be good for that; eventually, she breaks up with him.

Gossip Girl is one of Taylor’s recent projects. She joined the cast in 2007 and played Jenny Humphrey, Dan’s sister.

Jenny is fourteen, and she does not know what she wants to do with her life. The young woman dreams of fame and success, yet she is not always on good terms with people. Jenny would like to become a designer, but her social circle changes her for the worst: the girl turns bitchy and dresses like a goth.

In 2011, Taylor announced she finished her acting career and decided to focus on music: the artist would have much more opportunities to express herself because music was something a person created independently in comparison with acting.

Momsen recorded her first song at five: it was the soundtrack for How the Grinch Stole Christmas.

2009 brought the first tour with The Pretty Reckless: Taylor and her musicians opened another group’s show. After the concert, a new guitarist joined the band, and some members left. In 2010, the debuting album, Light Me Up, was released in Great Britain.

In summer, the first music video “Miss Nothing” came out; “Just Tonight” followed. The latter video showed the story about the relationship with a drug addict who could not manage his issue on his own.

In 2011, Momsen and The Pretty Reckless performed with the rock band Evanescence; the next year, Taylor sang with Marilyn Manson and supported the musician’s global tour.

There have been many rumors about the singer’s private life. She is said to date Chace Crawford, who played Nate Archibald in Gossip Girl, in 2008.

In 2010, Natt Weller, the son of Paul Weller from The Jam, was the woman’s boyfriend. The couple visited the Wireless festival in Great Britain. Today, there is no proven information about the artist’s relationship.

Some media spread rumors that Momsen is gay. Taylor often behaves provocatively: she is an eccentric rebel. There are many flirtatious photos of the singer and other women that encourage such talks. However, there are no true facts about Taylor’s sexual identity.

In 2018, Kato Khandwala, the producer who worked on three albums of The Pretty Reckless, died in a motorcycle accident. Taylor wrote on her Facebook page: “He was our ringleader, our confidant, my best friend, my family, my musical soulmate”.

The singer presented the music video for her cover on Woody Guthrie’s song “This Land Is Your Land”; the pictures of deceased Kato Khandwala were used there.