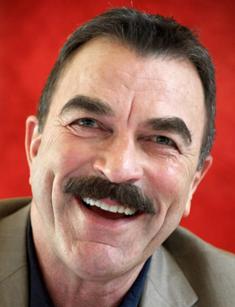 Tom Selleck is an American actor and producer, famous for starring as private investigator Thomas Magnum in the TV series Magnum, P.I. During his career, the actor’s filmography included dozens of movies, earning him the prestigious film awards.

Thomas William Selleck was born on January 29, 1945, in the city of Detroit, Michigan, located in the north of the United States.

The eminent actor often said in interviews that although he was a movie fan, he had never dreamed of an acting career. As a teenager, the actor devoted all his time to sports. It was his penchant for boxing and athletics that made Selleck’s body well-muscled and his health strong.

Few people know that Tom became an actor by chance. Having graduated from high school, the ambitious young man wanted to apply to a university to study architecture.

However, it turned out that the young man missed the deadline, and without thinking twice, he applied for the Dramatic Arts, which were also on the list. While attending lectures and passing exams, the charismatic young man worked as a model, and soon directors noticed him.

Tom began his acting career on television. He made his film debut in Myra Breckinridge, the adaptation of the famous novel by Gore Vidal, in which the famous actresses Farrah Fawcett and Raquel Welch played the leading roles. Although Selleck got an insignificant character, the well-spotted talent scouts from Fox saw the talented man as the future TV star and signed a seven-year contract with him.

However, Tom’s big break came only in 1980, when he was cast in the lead role in the series Magnum, P.I. directed by Donald P. Bellisario. The project aired for eight years. During this time, Selleck became a star. While shooting in the series, he also starred in equally exciting films. However, as is often the case, the role of a detective that made the Tom popular has become a curse, turning him into an actor who would always be defined by one character.

Due to the long-term contract, Tom refused the role of Indiana Jones, which director George Lucas kindly offered the charismatic actor. The character, which Harrison Ford portrayed, eventually made him a world-famous star.

In 1987, the comedy Three Men and a Baby was released. According to viewers, the only positive thing in the movie was Tom's acting. Critics liked his character of the charming architect so much that they unanimously declared that this stocky man would become a star.

Thanks to the role of Magnum, the producers invited the actor to other TV shows. So, in 1988, Tom appeared in an episode of the famous detective series Murder, She Wrote, starring Angela Lansbury.

The same year, the creators of the project Magnum, P.I. announced that they would close the series. Later, the actor admitted that it was his initiative because at that time he met his future wife Jillie Mack and plunged into the romantic relationship.

The second reason to "kill" the hero was awful physical fatigue. Despite the magnificent surroundings of paradisaical Hawaii, where the series Dwas filmed, the actor was a squeezed orange.

Movie lovers regarded Selleck’s following roles as an attempt to get rid of the image with which they began to identify the actor. From 1989 to 1995, Tom starred in the films An Innocent Man, Christopher Columbus: The Discovery, Folks!, Mr. Baseball and Three Men and a Little Lady, the sequel to Three Men and a Baby. The movies Broken Trust and Ruby Jean and Joe were quick to follow.

In 1997, the comedy In & Out directed by Frank Oz was released. In the movie, Selleck portrayed a gay journalist, and the 40-second kiss between Kevin Kline and Tom Selleck became the highlight of the film. It is noteworthy that they had to shoot 30 scenes because it was very difficult for two men to kiss.

It is worth mentioning that a few years before the filming in this movie Selleck was already marked down as homosexual. In 1991, an American newspaper published an article titled "Tom Selleck's Love Secrets – by His Father.”. Selleck shudders at the memories saying that he could file a lawsuit against them only for his father’s face when he read it in the newspaper.

Then angry Selleck sued the edition for $ 20 million. Earlier, the actor sued the magazine which wrote that Tom started a love affair with actress Victoria Principal, whom he had not even met.

During the filming, journalists often asked the actor how his wife felt about her husband playing together with the charming young partner. Tom replied that his wife was too smart to be jealous of his work, as well as the love letters that he received from both women and men.

In 2007, Selleck appeared in the detective TV series Las Vegas, and in 2010, he starred in the comedy Killers, alongside Katherine Heigl and Ashton Kutcher.

Tom has never liked to tell about his relationship with women, preferring not to make his private life public. That is why there is very little information on the Internet regarding the love affairs of the charming brunet.

It is only known that the first wife of the actor was a model, Jacqueline Ray, whose son was adopted by the actor a few months after the marriage. In 1985, the actor met British dancer Jillie Mack. The young woman conquered the actor’s heart and became his second wife. The wedding took place two years after their first meeting. Jillie gave birth to a daughter, Hannah Margaret.

The final season premiered in September 2017. In addition to Tom, well-known Donnie Wahlberg, Bridget Moynahan, and Will Estes also starred in it. In 2018, the eminent actor will also appear in the series Untitled Jesse Stone Project, which shooting is underway.

Nowadays Tom rarely films. The rational actor who charmed women around the world with his charming smile and thick mustache prefers an ordinary and quiet life to fame. For 30 years, the actor has been growing avocados on his own farm and is incredibly pleased with it.

Tom does not have accounts on either Instagram or Twitter. Fans learn about the latest news on the life of the Hollywood star watching interviews that periodically appear on various Internet resources. Everyone can also easily find information and pictures on the Internet related to his acting career.

Tom Selleck has a net worth of $45 million.