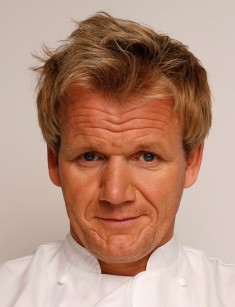 The Russian audience and people from other countries of the former Soviet Union have got acquainted with the cult personality of the world cookery and successful restaurateur and talented chef Gordon Ramsay after the release of his author's TV shows.

The projects of the extravagant Scottish chef became more than a show: you can watch the releases of Hell’s Kitchen or Kitchen Nightmares as gripping and exciting movies in which are united the following genres - detective, fighter, horror, and comedy. But besides the acting skills, Gordon Ramsay also has other talents: his restaurant network received 16 Michelin stars, and the cook himself was called "ingenious" and "inimitable."

Gordon Ramsay was born in Scotland in 1966, but he spent his first five years in Johnston situated 12 miles from Glasgow. You can hardly call the childhood of the future famous cook happy: his father had a harmful alcohol addiction. Being intoxicated the head of the family beat his wife in the presence of their four children. Gordon’s family could only dream about luxury: because of the alcohol abuse the father’s business wasn't successful, and the family of Ramsay had to move from town to town to find a place in the sun. They had finally stopped when they moved to the English Stratford-upon-Avon in 1976.

There were no cooks in Ramsay's family: his father changed ten professions, he worked as a welder, a seller, an owner of the shop. His mother was a nurse by her specialty. Gordon Ramsay wasn't going to dedicate his life to the culinary. At the age of eleven, the teenager professionally played in football. But at the age of eighteen, when Gordon was so close to the conclusion of the contract with Glasgow Rangers F.C., he decided to finish his sports career because of numerous injuries.

Gordon Ramsay entered the police college, but he failed the exams as he hadn’t got enough scores. Then the cookery appeared in the life of the young man. At the age of nineteen Ramsay became the student of North Oxfordshire Technical College of the Hotel and Restaurant Business Faculty.

After Gordon Ramsay had graduated from the college, he moved to the capital of Great Britain where he got a job at the prestigious Harvey’s restaurant. The chef of this restaurant was a master of the culinary art - Marco Pierre White. Having gained his first experience, the young cook changed the restaurant and the mentor. When Gordon James was working in the first British three-star Le Gavroche restaurant, he learned the elements of the classical French cuisine under the leadership of the master Albert Roux.

In a year the French master chef left Le Gavroche and took his capable student to the new restaurant located in the French Alps. Gordon Ramsay has joined his master. In a short time, the Scott who was very energetic decided to move further: the young cook set off for Paris where during three years he was acquiring skills at French maestro of the culinary art - Guy Savoy and Joël Robuchon.

Gordon Ramsay could demonstrate his increased skills on the private yacht where the owner of the restaurant invited him to be his cook. After the year-long voyage in the Atlantic Ocean around Bermudas Ramsay came back to the British capital.

For half a year Gordon worked as a chef at La Tante Claire local restaurant until his teacher Albert Roux has remembered this prospective student and invited the Scot to take the position of the chef in the London restaurant - Rossmore.

Gordon Ramsay has improved the image of the restaurant and made it extremely prestigious. During for years Rossmore restaurant received three Michelin stars. One had to reserve a table in Rossmore in advance, in one and a half or two months to have a possibility to enjoy the delicious chef dishes.

Gordon James became the owner of 25% of the restaurant’s stocks. But he quarreled with other shareholders and left Rossmore having taken all the service personnel from the waiters to the cooks with him.

Later the star chef said that this action appeared to be the most difficult decision in his life. Though, this step opened him a way to the independent career. Since that moment Gordon Ramsay began to work only for himself and became a businessman.

In 1998 the businessman opened his first restaurant - Gordon Ramsay at Royal Hospital Road. Three years later the institution became famous and had three Michelin stars. Thus, in 2001 Gordon Ramsay turned out to be the first British chef with such high status.

In 2002 the businessman opened the second haute cuisine institution in Belgravia – Pétrus restaurant where he became the chief boss. Hardly has he worked for half a year when Pétrus received the Michelin star. In 2007 Ramsay celebrated his second Michelin star for Pétrus.

In the new century, the network of the restaurants of the legendary British chef has expanded in a short time. In England, Ramsay has eleven restaurants, half of which have Michelin stars. Outside Great Britain, Gordon Ramsay founded sixteen restaurants and three pubs. Also, you can taste the dishes cooked by the master's recipes in Paris, New York, Tokyo, Tuscany, Singapore.

Gordon Ramsay is such a hard-working person that he is worth admiration. He not only opens new restaurants in Europe, Asia, and America but also finds time to write the books. His first book "Passion For Flavour" came out in the mid-nineties. Till 2007, the author published his fourteen recipe books and two autobiographies. In the collections, you can find the recipes of the first courses, second courses, various desserts and pastry, including the well-known "Apple pie," "Shepherd's pie," "Boston cream pie," brownie and crumble.

Gordon Ramsay invents the recipes of the best restaurant dishes and cooks them at home in his kitchen, which he has equipped with the most modern technology. The British cook hasn't regretted money for the arrangement and has invested $100, 000 for technical equipment, tableware, and devices.

In the late nineties, Gordon Ramsay proved himself as a talented showman: the spectators saw the documentary movie Boiling Point directed by him where the chef told about the development of his first restaurant. The ratings of the series have beaten all the records: earlier, reserved British people admired the bursting temper of TV host of Top Gear - Jeremy Clarkson. Though, in comparison with him, Ramsay's temper turned out to be explosive.

The scandalous chef didn't restrain himself in expressions and used abusive words in his tirades addressed to his clumsy subordinates. He could even throw a frying pan or throw away a bad dish in the trash. Though, the spectators liked what they were watching.

Gordon Ramsay was successful on the television, and this encouraged him to shoot some new projects. There were released cooking programs Kitchen Nightmares, Hell’s Kitchen, MasterChef U.S. and The F-Word ("f" could be understood doubly: f - for "food" and f – for "fuck" – abusive words). The TV shows were broadcast on the British television, but in a short time, they appeared on air in the USA.

The producer of Gordon’ projects Arthur Smith confessed in one of the interviews that all cooking shows were boring before the release of Ramsay’s show on the screens. Gordon has achieved the highest points of viewings of his show on the Fox TV channel due to his desire to express his emotions and his scandalous frankness. The fees of the TV host have increased to $400,000 for the episode.

In 2013 Gordon Ramsay released the project MasterChef. Junior in the habitual reality show genre. In this show, young cooks aged from 8 to 12 competed for the junior superiority in the kitchen. The program turned out to be extremely popular and acquired a significant number of followers all over the world. The analogs of this show were released in Russia and Ukraine - MasterChef and MasterChef. Junior.

Since September 2012 the chef has recorded 20 series of Gordon Ramsay's Ultimate Cookery Course. The videos appeared on YouTube. The well-known chef has proved that anyone can cook, and you don't need expensive products and modern cookers for exquisite dishes.

When Ramsay exhausted the kitchen subject, he reached the sphere of the hotels. In 2012 there came out the first season of Hotel Hell project in which the showman gave a second chance to the abandoned and unpopular hotels. Before his interference, the chaos, dirt and brutish attitude of the personnel towards the clients reigned in these hotels.

Gordon Ramsay married at the age of thirty. The teacher Cayetana Elizabeth Hutcheson (Tana Ramsay), who is eight years younger than Gordon became his spouse.

Tana gave birth to four children from her spouse: Megan, twins Jack and Holly and Matilda. By the words of his spouse, quick-tempered and straightforward Gordon is a wonderful father who has become the head of the strong family. Ramsay's friends admit that Gordon and Tana are opposite in everything. Gordon's wife is a sophisticated and intelligent person, at the same time she doesn't like cameras and is seldom captured by the paparazzi. You can hardly find her in the gossip columns or on TV screens. Nevertheless, the spouses get on well and complement each other. Tana is a director of the beauty salon. As well as her husband, she loves the sport.

Gordon Ramsay is a left-handed person. Having quite medium height (1,87 cm), he has 50,5 size of footwear. That's why the star orders his footwear.

Due to the network of the restaurants and pubs, sixteen books and TV Gordon Ramsay has become a rich person: Forbes estimates celebrity’s wealth of $140 million. The master of cooking has two mansions: one in the prestigious London’s district and the second one in Cornwall County.

At the beginning of summer of 2016, Ramsay shared the sad news with his Facebook subscribers: his wife Tana had had an abortion. The couple was expecting for the fifth child – the boy, and they had endured the loss with courage.

The 140-million wealth of Gordon Ramsay could provide rich life to the star’s children and grandchildren. But in 2017 the millionaire amazed the readers with the announcement in his interview to Telegraph edition that he wouldn't leave the inheritance to his children. The reason is his love and care for his four kids who have to achieve success without their father's help.

The only gift which Gordon’s three daughters and son can expect is a 25 percent deposit on the housing purchase. Ramsay said that he wasn’t going to pay the whole sum for the purchase of the apartments and he had made a concession under the influence of his beloved Tana.

In April 2017 Gordon Ramsay presented his Culinary Genius TV show. The show was released on the British TV channels.

The projects in other countries 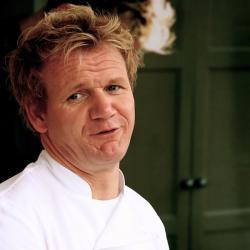