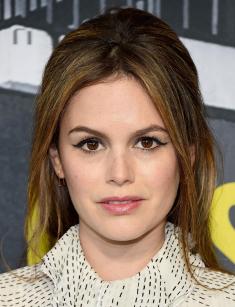 The audience is familiar with Rachel Bilson thanks to the lead roles in the youth series The O.C. and the medical drama Hart of Dixie. The woman’s style is unique, and she is often called one of the most extravagant actresses.

Rachel assumed she would devote her life to cinematography from the very beginning: almost all relatives had something to do with movies except for the mother who worked as a doctor.

Rachel’s father, Danny Bilson, followed in his grandmother’s footsteps and wrote scripts, directed, and produced movies. The great-grandfather George worked at RKO Pictures in Hollywood; he was the head of the trailer production department. The actress’s grandfather, Bruce, won the Primetime Emmy Award for Outstanding Directing for a Comedy Series for Get Smart. The aunt, Julie Ahlberg, is a producer.

The artist began to accumulate acting experience in her childhood; she debuted in the series It's True! As a school student, Rachel appeared in theater performances Bye Bye Birdie and The Crucible. Besides, the girl participated in commercials for fast-food company Subway, Raisin Bran breakfasts, and Pepto-Bismol pharmaceutical company.

This experience proved to be useful in the future: Bilson promoted her own clothes collection Edie Rose for DKNY Jeans and Hut sunglasses. Karl Lagerfeld chose the big-eyed, fragile beauty to advertise Magnum ice cream. Bilson’s height is 5.15 ft. (157 cm.), and her weight is 105.82 lbs. (48 kg.).

The breakthrough moment came with the episodic roles in popular projects: the comedy series 8 Simple Rules with Kaley Cuoco and the iconic fantasy drama Buffy the Vampire Slayer. The latter one made famous many stars: Sarah Michelle Gellar, David Boreanaz, and Charisma Carpenter.

In The O.C., the actress could also have only an episode. However, when the ratings of the first seasons were high, the woman’s character became one of the leads. Peter Gallagher, Adam Brody, and Mischa Barton starred in the series as well.

The O.C. became a cultural phenomenon in the United States; hundreds of thousands of fans from Canada to Australia watched the project. Bilson got Teen Choice Awards in three nominations; she was included in the lists of the most beautiful women all over the globe. However, people’s preferences changed later, and the project was closed in 2007 due to low ratings.

In the drama The Last Kiss, Rachel received the lead role. Zach Braff (Scrubs) wrote the script to the movie and took another leading part. Bilson played the young woman who involuntarily made the main character doubt if he had chosen the right life path.

Fans discussed the details of filming more passionately than the artistic value of the movie. There was a scene when the actress was supposed to be naked; Bilson refused to do that and demanded a body-double. In her time, the artist’s mother, a sex therapist, said that complexes were ridiculous.

Despite the popularity that TV projects brought her, Bilson claimed she would quit them for a big, significant movie. Soon, she had the chance: Doug Liman offered Rachel the role of Millie Harris in the fantastic action movie Jumper.

The project seemed to be cursed. In the middle of filming, producers changed the main character; later, that actor had a severe injury. One of the scene designers died at the movie set; critics’ reviews were not much positive. Jumper recovered all the costs, though; it was the only advantage.

The collection of eleven novellas New York, I Love You with Natalie Portman, Ethan Hawke, Bradley Cooper, and Orlando Bloom was the next project. The independent movies Life Happens and Waiting for Forever were marked with the lead roles. The actress participated in the sitcom How I Met Your Mother and the comedy The To Do List.

In the medical series Hart of Dixie, Bilson personified a doctor who moved to a new place. The citizens of the small town are pretty eccentric, and the young physician has to adapt to unusual conditions.

Rachel Bilson does not keep secret her personal life. She had a romance with Adam Brody whom she met at the movie set of The O.C. The screen affair came to real life; the couple spent together three years.

Rachel and Adam lived together and had two dogs; the actor even started the comics project with the woman’s father. Although those characters married in the end, the artists broke up.

When Jumper was filmed, Rachel had a romance with Hayden Christensen (Anakin Skywalker in Star Wars). The couple announced their engagement in 2009; the next year, to fans’ surprise, they split up.

Three months later, journalists were talking about Bilson and Christensen again: they made amends. In summer 2014, the press spread the news about Rachel’s pregnancy. The girl was born in November. The father chose the name, Briar Rose, after Sleeping Beauty from the Brothers Grimm’s tale.

The couple never married. In 2017, an American tabloid referred to its sources and announced the actors broke up for good. Bilson stayed in Los Angeles, and Christensen came back to Toronto.

Hayden’s secret romance with Julia Roberts’s niece, Emma Roberts, was the reason. The actors allegedly got close at the movie set of Little Italy. The news about the affair was particularly painful for Rachel: Emma used to be her friend. However, none of them confirmed or denied these speculations.

Rachel likes the casual style with boho elements; she collects bags and shoes. Stella McCartney and Chanel are her favorite designers. Judging by Instagram photos, the young mother is in perfect shape. She supports the Los Angeles Clippers basketball team. Sean Penn and Sandra Bullock are her favorite actors.

The actress showed her singing talent in the new season of the TV series Nashville. The project about the country singer Rayna Jaymes was aired first in October 2012 on ABC; in 2016, it was closed. Later, Country Music Television bought the rights to the series and ordered 22 episodes of the new season.

By that moment, Bilson had sold her house in Los Angeles; the invitation to Nashville turned out to be helpful. After Hart of Dixie on CW and two years of bringing up the daughter, the actress felt attracted to the character she had never played before. The woman personified Alyssa Greene, a marketing professional and the polar opposite of Rachel. It was a kind of challenge for Bilson; she started working enthusiastically.

In 2018, Rachel had another lead role in the crime comedy series Take Two from Castle creators.