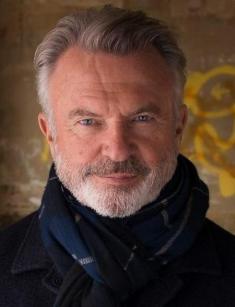 It is truly said that life begins at 40. When Sam Neill was 36, he became a father for a second time, and his next child was born when the actor was 44 years old. Moreover, there are rumors, that the 70-year-old man started a love affair with a well-known journalist, despite a big age difference. At the same time, he constantly films in movies.

Sam Neill (his real name is Nigel John Dermot) was born on September 14, 1947, in Omagh, to Dermot, a New Zealander and army officer, and his wife Priscilla, who was born in England. At that time, his father served with the famous Irish Guards. According to the actor, the achievements of his father are the most valuable thing in his life.

His parents have been very successful liquor retailers, and later Sam followed in their footsteps, heading the largest winery called Two Paddocks. In 1954, Dermot returned to his homeland, where the boy received a classical English education at Christ's College. There, the 10-year-old schoolboy decided to change his name to Sam to "live without pain" and went to the local theater stage for the first time.

He became even more interested in the performing arts at the University of Canterbury and Victoria University in Wellington, where he graduated with a BA in English literature.

Sam has a lively recollection of his childhood saying that it was difficult for him to forget whooping cough at the age of four. The actor also has an older brother, Michael, whom he admires sincerely. At the same time, he is critical of his personality and often calls himself a "bastard."

Sam admitted in an interview that he stuttered at an early age and later began to support the British Stammering Association.

Sam began an acting career with two bit parts in the films Landfall and Ashes. Then his filmography included the leading role in the thriller Sleeping Dogs which became the first feature-length 35 mm film produced entirely in New Zealand.

Later Neill's credentials included the film that helped him to develop a successful career. The movie My Brilliant Career received a large number of awards. So, it was plain sailing from here on. For example, while shooting Dead Calm, Sam collaborated with Nicole Kidman and met his second wife.

The participation in the series also did not go unnoticed because the miniseries Reilly, Ace of Spies earned his first nomination for the Golden Globe Award. He also starred in The Tudors, Alcatraz and Peaky Blinders.

There is an interesting fact that he was lucky to portray King Arthur's mentor in the 1998 film Merlin and the 2006 movie Merlin's Apprentice.

It is quite difficult to resist Sam's incredible charm and charisma. Therefore, separating from one woman, he immediately started a long relationship with another.

In 1980, his first wife became actress Lisa Harrow, who starred with her husband in Omen III: The Final Conflict and gave birth to a son, Tim, in 1983. She is now married to the founder of Ocean Alliance, Roger Payne.

In 1989, he married make-up artist Noriko Watanabe. As already mentioned above, the couple met while working on the film Dead Calm. Two years later, a daughter, Elena, was born. In 2017, the couple broke up.

In 2018, information appeared in the media that Sam’s heart was not free again and belonged to ABC correspondent Laura Margaret Tingle. It was reported that the actor and correspondent met through mutual friends, although they had begun to flirt on Twitter a year earlier.

Neill also has an illegitimate child, Andrew, from a previous relationship, and he is stepfather to Noriko’s daughter from her first marriage.

The Hollywood star said in an interview in his inimitable manner that his most common phrase was "to have sex," and his favorite word was a "womb."

Nigel is not indifferent to sport, in particular to rugby and football.

In 2018, the actor voiced two heroes, old Mr. Joe McGregor and Tommy Brock, in the animated film Peter Rabbit. The actor also portrayed Captain David Hawthorne in the thriller The Commuter, which was released in Russian on International Women's Day. Nowadays, he is playing with Kate Winslet and Mia Wasikowska in the drama Blackbird. Despite his age, Sam is full of creative ideas. By his own admission, the film crew is creating a movie about the first female jockey, Michelle Payne, and he will play her father.

As for the political views of the three-time Golden Globe nominee, he openly supported the Prime Minister of New Zealand and criticized the activities of Donald Trump during the meeting with Barack Obama.

He is concerned about the environmental condition and even appeared in Greenpeace advertising to ban the use of disposable plastic bags.

“I'm not a crazy hippie with wild eyes, but I think we should be very skeptical about the use of chemicals. We should all be concerned about the condition of the planet. I have four grandchildren, and I am anxious about their future,” he said.

The funny photos of pets (dogs, piglets, ducks, etc.), with witty remarks, pictures of meetings with friends, traveling, amazing landscapes or a new T-shirt immediately get many likes.