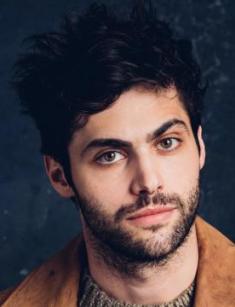 Matthew Daddario in 2017American actor Matthew Daddario made his screen debut in 2012. For five years, he rapidly achieved the movie stardom. His starring role was the character of Alec Lightwood in the fantasy series Shadowhunters.

The Shadowhunters star was born in New York City in 1987. Matthew Daddario is in love with this city and feels an integral part of the Big Apple. The young man admitted more than once that he would not change the bustle of New York City for any other place on the planet.

The actor grew up in a family of successful lawyers. Matthew is the second of three children. He has two sisters: older Alexandra Daddario, a famous actress, and younger Catherine, who also thinks about acting.

Matthew Daddario is of mixed descent. The actor’s ancestors are immigrants from Italy, Hungary, the UK, Germany, and Ireland. They settled in the USA, and the country became the homeland for their children and grandchildren.

The boy began to show his creative skills in early childhood. Matthew, who grew up in the East Side, attended auditions for the Amazon Kindle and Burger King commercials, having barely learned to speak.

However, the mother encouraged the son to act, wanting to teach him to talk, to feel relaxed, communicating with people. A desire to see the boy on the screen was not the main reason.

In his final year, the guy realized that he was not interested in the future profession. The scene and the set attracted him much more. In 2010, having graduated from the university, Daddario did not look for a job in his degree field but went to auditions.

Matthew Daddario began an acting career with the role of Peter Hamble in a short film, entitled The Debut. The movie was released in 2012 and showed the aspiring actor to directors and producers.

The following year, Daddario was invited to play in Drake Doremus’s full-length melodrama Breathe In. The actor appeared on the screen together with famous colleagues: Guy Pearce, Felicity Jones, and Mackenzie Davis. The movie premiered in July 2013 in Ireland and brought Daddario recognition.

The same breakthrough year, the actor starred in Eddy Duran’s thriller 36 Saints and the American comedy melodrama Delivery Man. On the Rotten Tomatoes website, the comedy received negative reviews, the box office earning did not reach the production budget, but the experience of working with Vince Vaughn was useful for Matthew Daddario.

In 2014, the filmography of the American actor included two movies: the comedy Growing Up and Other Lies and the sports and biographical drama When the Game Stands Tall, directed by Thomas Carter and based on real events.

It is the story of a football coach who turned an unknown school team into a great team. The title character, coach Bob Ladouceur, was portrayed by Jim Caviezel, who became famous for the role of Jesus Christ in the drama The Passion of the Christ. Matthew Daddario played Danny Ladouceur, the coach’s son.

In September 2015, the romantic drama Naomi and Ely's No Kiss List premiered in Brazil, in which Daddario co-starred with Victoria Justice and Pierson Fodé. But Matthew rode a real wave of popularity in 2016.

The remake of Eli Roth's famous thriller Cabin Fever, shot by Travis Zariwny, was released. Matthew Daddario, Gage Golightly, and Samuel Davis played the leading trio in the horror movie. However, it was the fantasy series Shadowhunters that turned the American actor into a star.

Initially, Daddario auditioned the role of Jace Herondale. However, when the author of the book series, Cassandra Clare, saw the shot scenes, she said that Matthew could be good for Alec. The producers had to take to the writer’s advice and give Daddario the role of Alec. Dominic Sherwood was cast in the role of Jace. Katherine McNamara portrayed Clary Fray, and the character of Magnus Bane went to Harry Shum Jr.

The first season of the series premiered in January 2016. The filming of the project took place in Toronto, Canadia. Shadowhunters is a remake of the 2013 movie The Mortal Instruments: City of Bones. But unlike the unpopular movie, the TV series received an enthusiastic response from viewers and positive reviews from critics.

It is noteworthy that previously, Matthew Daddario had auditioned for The Mortal Instruments: City of Bones, but was not invited to the shooting. Therefore, the offer to play in Shadowhunters turned out to be a pleasant compensation for the failure in 2013. The first season of the series consists of 13 hour-long episodes.

Matthew Daddario was inspired by success but did not rest on his laurels. The actor thought about career development and began to study directing. Soon, Matthew plans to try his hand at directing and make his debut short film. Legendary Harrison Ford, who played Indiana Jones and Han Solo, became a role model for Daddario.

Matthew’s fans claim that their idol looks like a seraph. He is 6.23 ft. (190 cm) tall, has penetrating brown eyes and raven-black hair. The handsome man has an impressive army of female fans. But they do not know who lives in the heart of Matthew Daddario.

For a long time, the actor has dated American model Esther Kim. But during the filming of Shadowhunters, in which Daddario and Harry Shum Jr. played lovers, the paparazzi took the pictures of the actors in a nightclub. The photo, depicting the passionate kiss of two guys, caused a lot of rumors.

They began talking about Matthew and Harry’s orientation, calling the guys gay, although, at that time, Daddario dated Esther, and Shum was married to dancer and actress Shelby Rabara. The reaction of Matthew’s girlfriend is unknown, but the actors do not comment on the rumors.

In January 2017, the second season of the series Shadowhunters was released. It consists of 20 episodes. In the summer of 2017, Daddario aroused the curiosity of fans, posting on Instagram a photo of a hedgehog, and writing a Russian hashtag, #ежиквтумане. During the day, Matthew’s post got 111,000 likes and hundreds of comments from Russian-speaking subscribers.

They say that the actor’s girlfriend, Esther Kim, knows Russian, which means that the couple has not broken up after a gay scandal. Fans of Shadowhunters suggested that Daddario’s passionate kiss with the filming partner was an advertising gimmick to increase the project’s rating.

Matthew Daddario has a net worth of $3 million.