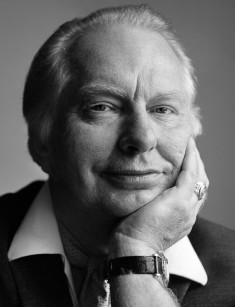 Ron Hubbard is a founder of Church of Scientology, which represents the religious and mystical movement. Due to his charisma and skills in public speaking, he has managed to gain a multimillion crowd of fans. Though this person who was remembered by his aphorisms and quotes died a long time ago, his fantastic ideas on the dianetics are spread in the masses.

It’s worth noting that Hubbard, the Englishman by his origin, has two biographies: one of them is real which is told by the Scientologists. The second one is saturated with the facts, but it's disputable which one biography of Hubbard is credible. The contemporaries and Ronald's relatives consider that some information is doubtful or false. That’s why below we will give an example of two stories which, as it seems, are told about different people.

The Scientologists say that Ron was brought up by his grandfather who was ready to do everything for his grandson. Moreover, there were the legends that since childhood Hubbard had amazing abilities not ordinary for every person: at the age of 3.5, Ron allegedly learned to ride wild mustangs, and a little bit later the boy was accepted to the tribe of Blackfeet Indians and made friends with their leader - Old Tom. In such a way, through the special rite, he became the blood brother of the Blackfeet.

When the young man was twelve years old, he began to be interested in the abilities of the human mind, and the meeting with the seaman who told young Ronald Freud's knowledge left a trace on the young man’s thoughts. Moreover, it’s noted that the boy had a sharp mind and a good memory.

Besides, Hubbard traveled alone across the world; he visited India, Tibet, and the Himalayas. Here he communicated with the wise men who taught him the knowledge of life and disclosed its secrets. What about the Scientologists, they tell in brief about the participation of Hubbard in the civil war and that he nearly became the first person who received the diploma in the Nuclear Physics at George Washington University.

However, the contemporaries and relatives of the Church’s leader told that Ronald's youth was much duller. If to address the official sources, you can find the information that the leader of the movement was born on the 13th of March, 1911. The boy spent his childhood in the Town of Tilden situated in the State of Nebraska in the USA.

Ron spent most of his time at his grandfather’s who was working at the position of the veterinarian and didn’t own a big ranch. Moreover, in childhood Hubbard was afraid of the horses. It’s worth noting that the child didn’t distinguish with any remarkable skills and was an average pupil at school. And Blackfeet Indians confirmed that the idea about the blood mixture was the invention of the directors.

What about traveling, Hubbard traveled only once to China with his mother to visit his father who was working in the Eastern country. In his diary Ronald wrote some rude note:

"The main problem in China is the fact that there are a lot of cross-eyed people here."

If talking about education, Ron entered George Washington University. However, the young man didn’t show special interest in the studies and was dropped out for poor progress as he failed the exam on the nuclear physics.

Later, Hubbard began to have financial difficulties that's why he developed some improbable plans and business schemes to earn his living. During this period of life Ronald really traveled: the young man had to hide from the annoying creditors.

It’s not surprising that Ronald Hubbard was engaged in the literature having hopes to earn money with the help of the fantastic books which were published in tabloids.

And the mystic invented unusual names for his literary works such as "The Carnival of Death," "Man-Killers of the Air," "Enslaved Souls" etc.

Luck smiled to Ronald, as he declared himself at that time which was called "the Golden Age of the science fiction." It's worth noting that the author of the literary works tried his hand in different genres: detective, western, lyrics, etc. Moreover, Hubbard tried himself as a scriptwriter for the eminent Columbia Pictures Film Production.

When the war started, Ron Hubbard was serving in the Navy. However, he didn't take part in any battle and hole up in the rear. However, a biography which is propagandized by the Scientologists, tells that Hubbard sank the Japanese vessels almost on his own.

Later Ronald began to have diseases because of his sedentary style of life, and he was demobilized: the doctors diagnosed the man with the ulcer, conjunctivitis and other unpleasant diseases. For his torments, Ron Hubbard received a pension and confessed that he was thinking about the suicide. In the books of the Scientologists it is said that, earlier, had allegedly received the battle wound, Hubbard who was in the military hospital, invented his own method of treatment.

If talking about the dianetics, after unsuccessful tries to be enlisted in FBI and CIA Hubbard left his wife and kids in order to become engaged in the "magic." Jack Parsons, the pupil of the well-known satanist Aleister Crowley, contributed to this.

The sense of the dianetics consists in the following: this method helps to reduce the negative emotions received in the past as well as the fears and psychosomatic diseases which have impact on the person. In such a way, the reason predominates over the body what is called a destructive psycho-cult by the psychologists. Hubbard told that there existed the N-grams in the human brain. N-grams are the records of the painful moments experienced by the person in the past. In principle, these are the basics of the Scientology doctrine.

It’s noteworthy that the German philosopher and psychologist Erich Fromm called the organizing scheme of Scientology Church a financial pyramid which instills the "clients" other social behavior models.

In 1980 Hubbard wrote the Battlefield Earth which became the best-seller which was published in New York Times. It’s remarkable that in 2000 there was released the same-name movie on the base of the book with John Travolta in the leading role. The movie got the record quantity of Golden Raspberry anti-awards.

Let's note that due to his charisma and motivational sayings Hubbard gained great achievements: he visited different towns with lectures, he founded his own studio for the release of the educational pictures and released a number of published works. Moreover, Hubbard developed the Purification Program which purifies the organism of the toxic substances, including alcohol, nicotine, and medicine.

The contemporaries note that Ronald Hubbard was a sociable and open person in public. However, in his personal notes, one can come across the phrase that all people were his salves. Some people noticed when Ronald was in low spirits he could offend people and tell obscenities.

What about Ron’s character, he was inclined to showing off. Despite the fact that he had a decent state he didn’t pay the debt of $350 to the bank till the end of life.

Ronald had such gift of conviction that he not only persuaded people to believe in the new religious doctrine but also made one of the present writers believe that he was lulling a kangaroo.

What about his personal life, Ronald was a bigamist. In the summer of 1946 the man proposed to Sara Northrup, having hidden the fact that he was already married. When Sara divorced from Ron, she told that Ronald tortured her, made her take drugs and beat.

During his life, Hubbard had different diseases. In 1978 he had a heart operation, and in a year he was diagnosed with the frontal lobe tumor. Ronald Hubbard died on the 24th of January, 1986 at the age of 74. The stroke became the reason for his death. 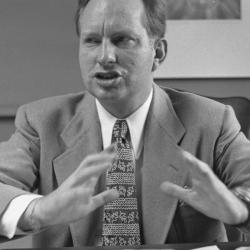