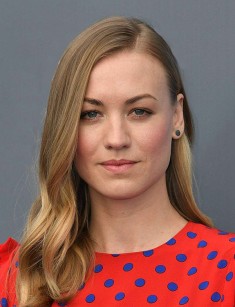 Yvonne Strahovski is the Australian actress with Polish roots who has made the career in Hollywood. She is famous for her roles in the detective drama Dexter and comedy series Chuck. In 2017, the actress made the appearance in the drama series The Handmaid’s Tale where she got the lead part. Today, Yvonne is at the peak of her popularity.

Yvonne Jaqueline Strzechowski was born in New South Wales, Australia, in summer 1982. Her parents, Piotr and Bożena, were Polish migrants from Tomaszów Mazowiecki who were looking for a better life not long before their daughter was born. They settled in the suburban area of Sydney, Maroubra.

There were no actors or other people related to art in the future star’s family: the father was an electronic engineer, and the mother worked as a lab technician.

Yvonne took an interest in acting in the ninth grade: the Catholic school where the girl studied staged Shakespeare’s Twelfth Night. As the audience applauded, the young woman realized what she was going to do after graduating from the Santa Sabina College in Strathfield.

In 2003, Yvonne finished the University of Western Sydney and became the Bachelor of Arts. The young woman felt confident on the stage: she often performed at the Theatre Nepean.

Yvonne’s TV career began in 2004 when she played Suzie in the satiric show Double the Fist. In 2005-2006, the actress participated in several episodes of the Australian soap opera Headland.

In 2007, the actress participated in the English and Australian thriller Gone; the next year, the Australians enjoyed Strahovski’s acting in the comedy The Plex. Fans and experts emphasized that the actress looked natural in all genres.

In the mid-2000s, the actress took part in American projects. Eventually, the producer Josh Schwartz noticed her. It was Schwartz’s Chuck that made Yvonne the Hollywood star. He also recommended the actress to change her Polish second name which was difficult to pronounce; from that time, the audience knows the woman as Yvonne Strahovski.

The actress played the agent Sarah Walker in five seasons of the adventure comedy. Zachary Levi and Joshua Gomez also starred in the project. The series brought Strahovski much fame; six months later, she moved to the United States. Her parent also moved there; the actress had been missing them for a long time.

After Schwartz’s project, many American and Australian directors offered the actress roles. She did not reject them and lived between the two continents.

In October 20009, the American thriller The Canyon by Richard Harrah was premiered in America. The next year, the Australian comedy I Love You Too came out. In both projects, Yvonne got the lead parts.

In 2011, the action thriller Killer Elite based on Ranulph Fiennes’s The Feather Men was released. Yvonne took the role of charming Anne, the lover of the mercenary Danny Bryce (Jason Statham). Clive Owen and Robert De Niro appeared in the movie as well.

When the game Mass Effect-2 was released, fans had the chance to listen to the actress’s voice and look at her animated version: Strahovski voiced Miranda whose image was created from the actress’s appearance.

In 2012, Chuck was finished. Strahovski did not spend much time unemployed: the same year, Anne Fletcher’s comedy The Guilt Trip came out. Barbra Streisand co-starred with Yvonne Strahovski.

In 2012, the work on the detective drama Dexter began. James Manos, the scriptwriter and co-producer of the first season of The Sopranos, was the series creator. It is the story of the maniac who got hired as the police forensic expert in Miami. People loved the project; overall, eight seasons were released. The project was nominated for the Emmy and Saturn Awards, but the US parental organizations accused the series of extreme cruelty.

The final season of Dexter came out in 2013. Yvonne Strahovski played the mysterious character Hannah McKay, the key figure of the seventh season.

The next year, the actress appeared in three projects: the city fantasy I, Frankenstein (the lead role), the fourth season of the black comedy Louis, and the ninth season of the drama series 24: Live Another Day.

In 2016, Yvonne Strahovski played the major role in Manhattan Night; she collaborated with Adrien Brody. The premiere occurred in May.

In 2017, the Hollywood star married her colleague Tim Loden. The couple’s relationship lasted for six years. Yvonne and Tim are hardly good figures for paparazzi and tabloids: the actors have never provoked scandalous rumors.

The star loves animals and supports PETA protecting animals’ rights. In 2010, the actress appeared in PETA’s campaign that encouraged people to take subject-to-euthanasia pets from shelters instead of buying cats and dogs.

Yvonne Strahovski is fond of mountain climbing and dancing.

The actress has Twitter and Instagram accounts where followers can find recent photos and learn the latest news from Yvonne’s life.

In spring 2017, Bruce Miller’s drama The Handmaid’s Tale was premiered. It is the screen adaptation of Margaret Atwood’s novel under the same title. The book and series describe the story of the fictional totalitarian state where women lost fertility: only one percent of all women are capable of giving birth. To procreate, people established camps where ordinary people are being prepared to give birth to military men’s children.

Yvonne Strahovski played the Commander’s wife, Serena. Her British colleague Joseph Fiennes became her stage husband; people know him for the lead part in the drama Shakespeare in Love. The audience welcomed the series; in 2018, the next season is expected. 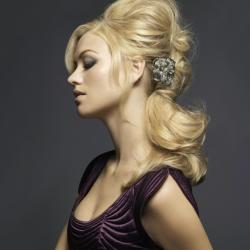