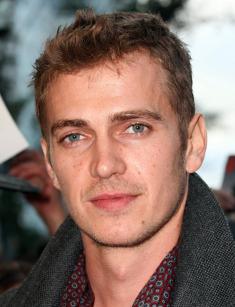 The second and third parts of Star Wars made the Canadian actor Hayden Christensen to the top of his fame. Who knows what would have happened to the fate of the artist, if the director and screenwriter of the saga George Lucas did not see his hero Anakin Skywalker in the little-known boy from Vancouver.

Hayden Christensen was born in April 1981 in Vancouver but his childhood was spent in the heart of Ontario – Toronto. The parents of the future star of the project Star Wars had no direct relation to the world of the cinema: David Christensen and Alie owned a telecommunications company. Hayden's father is a programmer by education. His mother is a speechwriter.

Hayden Christensen calls his childhood and youth happy because he was in a large family, where parents were interested in the lives of four children: the sons Tove and Hayden and the daughters Hejsa and Kaylen.

Christensen had an interest in television and acting in childhood. At the age of 8, the boy advertised cough medicine and he received an invitation to an episodic role in the German-Canadian soap opera Family Passions at the age of 12. In addition to filming, Hayden Christensen was interested in sports: the boy reached professional heights in hockey and he showed an excellent amateur level at tennis.

The advantage in the direction of the cinema happened during his holidays in Long Island when Hayden visited his grandmother. Christensen became interested in acting, attending classes at the actor's studio in New York. The teenager enrolled in the school drama studio after returning home.

The father of Hayden didn't like the desire of his son to become an actor. He admonished the boy to give up this idea for a long time: David Christensen understood how difficult it is to get to the top movie-"Olympus." But the boy persisted. From 1993 to 2000, Hayden Christensen starred in six TV series, where he was entrusted with the role of the second plan. These works brought the young artist neither fame nor recognition but he believed that he would undoubtedly catch good luck.

Hayden Christensen began to increase his biography in 2000, after the release of the melodrama directed by Sofia Coppola's The Virgin Suicides. The film received a warm welcome from the youth audience and film critics. The Canadian artist was noticed. Christensen was lucky to work with such Hollywood stars as Kirsten Dunst, James Woods, Danny De Vito.

The young actor starred in an infamous serial drama Higher Ground the same year, where he played a teenager, who suffers from the molestation of his stepmother. Having escaped from sexual violence, Hayden's hero becomes a drug addict and gets to a boarding school, where re-educate awkward teenagers

The main role in the sensational melodrama brought him fame. Hayden Christensen appeared in an episode of the film Trapped in a Purple Haze with his friend Jonathan Jackson the same year.

Hayden Christensen grew rapidly: the 20-year-old artist was invited to star in the American drama Life as a House in 2001. Hayden's hero is a teenage Sam Monroe, who has a problematic relationship with his father, who left him with his mother. The man returns to the family when he found out about the incurable disease but it is not an easy task to regain the trust of adult Sam.

Hayden Christensen followed a terrible diet to play a teenager. He ate salad and drank water. As a result, he dropped 24 lbs (11 kg) and 5-6 years visually. The actor broke his right hand in one of the sharp psychological scenes. But difficult shooting brought Christensen the expected success. The artist was nominated for the prestigious awards a Golden Globe and a Screen Actors Guild Award for his starring role in the melodrama and also received the National Board of Review.

The movie grossed $ 23 million worldwide. It is noteworthy that the premiere of the project in America took place on the day of the terrorist act on September 11, 2001.

In 2003, Hayden Christensen starred in the author's film. The Canadian actor got the main role in the drama Shattered Glass of Billy Ray. He played a sociopathic journalist Stephen Glass, who worked in a respectable magazine and investigated high-profile events in the United States. Stephen`s rating dropped after the fraud was revealed. The movie is based on the real material of the 1990s.

Hayden Christensen received the prize of the Swiss jewelry company Chopard and was nominated for the Saturn Award and the Satellite Award as Best Young Actor. Critics and viewers praised the film and the artist but the project did not participate in the nominations for the main Hollywood award – the Oscars for unknown reasons.

It is noteworthy that the co-producer of the project was the elder brother of Hayden Christensen – Tove. The brothers established a production company Forest Park Pictures 2 years before.

The game of the Canadian artist was not always successful. In 2007, the mystery thriller Awake was released, in which Hayden Christensen and Jessica Alba played the main characters. Critics considered the game too primitive and nominated two stars for the anti-prize, the Golden Raspberry Awards.

In 2008, the sci-fi film Jumper was released. Hayden Christensen and Jamie Bell had main roles. The premiere of an exciting thriller took place in Russia and the United States in February 2008. The filming took place in the Colosseum for three days. Some directors managed to do it. Two accidents overshadowed Christensen's work in this film and the movie received unfavorable reviews from critics.

In 2009, Hayden Christensen starred in one of the 11 novels New York, I Love You together with Andy Garcia and Rachel Bilson and appeared in the action movie American Heist in 2013. The action film was first shown in Russia in the summer of 2015. Christensen with Adrien Brody played the main characters.

After his starring in the saga Star Wars, Hayden Christensen felt the taste of worldwide popularity. The director George Lucas chose the little-known Canadian actor in 2000. Lucas was not satisfied with 400 applicants for the role of Anakin Skywalker, even when he auditioned Leonardo DiCaprio until he saw Christensen. Critics were surprised to see the choice of the director, calling the skills of Hayden "raw." But this "dampness" persuaded and bribed Lucas.

Besides, the director said that he saw «alchemy» between Hayden Christensen and Natalie Portman, that will convince the audience of the veracity of the novel between the heroes of the saga. Later, the audience and the Hollywood stars began to say that the affair between the stars is not only in the movies.

People magazine placed the Canadian actor in the TOP 50 most beautiful people in the world after the release of the 2nd episode of Star Wars, called Attack of the Clones. The audience found Hayden Christensen's appearance immaculate. He was 6 feet (1.83 m) tall. He weighed 154 lbs (70 kg).

The third part of the saga called Revenge of the Sith puzzled the audience: the character of Christensen changed from positive to negative. Critics disagreed about the skill of the actor. Hayden received the Young Hollywood Awards and the negative award, the Golden Raspberry Awards for his work in the third part of the movie. Christensen got the role in Revenge of the Sith and Attack of the Clones and was nominated for the prestigious Saturn Award.

He had not perfect relations with the actress Rachel Bilson, his colleague on the project Jumper: the artists broke up in the summer of 2010 but they made up in the winter of the same year.

In the spring of 2014, fans of the star found out that Hayden and Rachel had a happy event. In October 2015, the couple had a daughter, Briar Rose Christensen. So, fairies called Princess Aurora in the movie-tale Sleeping Beauty.

Hayden Christensen loves her daughter and claims that she has a lot of similarities with the heroine of Sleeping Beauty.

Fans of the actor repeatedly noticed Hayden's touching habit: when he focuses on his work, he sticks out the tip of the tongue. This feature of Christensen can be traced from his childhood. And a star is afraid of bees, which he is allergic.

The parents of young Briar Rose protect the girl from the annoying attention of the paparazzi. In May 2016, photographers managed to remove the daughter of Christensen, when the couple was at the farmer's market in Los Angeles. Hayden Christensen has a net worth of $12 million.

In the fall of 2017, the new film will be released with the participation of Hayden Christensen. It's an action-thriller First Kill of Steven C. Miller. Bruce Willis and Shea Buckner stared in this film too.

The 39-thousand army of the subscribers finds out the news about the personal life of the actor on the page of Hayden Christensen on Instagram.