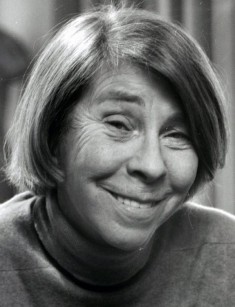 Tove Jansson was the Finnish writer who authored the series about the Moomins and other stories. She also illustrated books and created comics and paintings. In Finland, there are several murals and wall paintings made by Tove Jansson.

Jove Jansson was born in August 1914. The future writer’s mother Signe Hammarsten was a famous Swedish artist and book illustrator. Signe moved from Sweden to Finland where she met the sculptor Viktor Jansson, the girl’s father.

There were three children in the family; Tove was the eldest kid. Her younger brother Lars was also the artist and worked with his sister on the comics about the Moomins; the middle brother became a photographer.

The mother’s family was famous in Sweden: many outstanding persons and state activists were the Hammarstens. Jansson gladly told stories about her Swedish roots in her interviews. In comparison, fewer facts are known about her Finnish father’s ancestors.

When Tove grew up, the relationship with her father was tense. A conservative and old-fashioned man, Viktor did not approve of his daughter’s liberal circle. Unlike her father, Tove was an open-minded and tolerant person who valued freedom.

At the same time, the girl admired her father’s work; from the very beginning of her life, the would-be writer was surrounded by pieces of art. In terms of art, the father was a good advisor for Tove. Many famous and creative people visited the family’s house. Thus, the environment contributed to Tove’s character development.

The writer remembered how she spent summers with her grandmother in Sweden, near Stockholm. The sea was not far from the house, and the children could hear the waves crash. Tove had deep connections with her family and began to live separately only at 27. She continued to treat her relatives warmly until her last days.

To study at University College of Arts, Crafts and Design, 15-year-old Tove went to Sweden. After she graduated, she visited several art schools in different European countries for internship.

As the woman came back home, she began to illustrate books and create caricatures for different clients. The young artist had already had some experience: Jansson was famous as an illustrator in Finland because she learned how to paint early; she collaborated with a popular children’s magazine since ten.

The series of books about the Moomins and other creatures living in Moominvalley brought Tove Jansson the real fame. These books were immensely popular in the middle of the 20th century: millions of copies were translated and printed all over the world. Tove Jansson also created the classic illustrations to those stories.

In addition to the novellas, there were four illustrated books and two comics collections on the Moomins. The writer also created the play Dangerous Summer for the theater stage and a libretto for a musical.

On the one hand, the popularity of the Moomin series generated much attention to Tove; it was bothering the writer. She even bought an island in the Gulf of Finland to hide from annoying journalists and fans. On the other hand, the agency Associated Press offered Jansson to publish the Moomin comics.

The artist signed the agreement with the agency for seven years. The first comics appeared in 1954 in London. Soon, 58 publishing houses released Jansson’s comics about the Moomins in 17 countries.

At first, Tove was making the comics herself, but she got tired of that; Tove’s younger brother continued the work. Lars Jansson kept creating the comics for 20 years non-stop. In addition to children’s comics, the comics for adults came out: for example, in one story, Moominpapa built a time machine by accident, and the Moomins found themselves in the wild west.

Several Soviet, Finnish, British, Polish, and Austrian cartoons were based on the books about the Moomins.

Jansson’s literary heritage includes the books not related to the Moomin series. In Sculptor’s Daughter, Tove told the story of her childhood in a unique manner. Having read this book, Moomin fans may understand some motives in Jansson’s stories for children.

In Sun City, Jansson described a peaceful city where the retired lived: it was the quiet place with numerous boarding houses waiting for new clients. The time seemed to have stopped there, yet the citizens’ lives were full of heated arguments, events, and adventures. Besides, the writer presented some ten collections of short stories including Traveling Light and Toy House.

Tove Jansson considered herself to be the artist in the first place while literature was not a serious business for her. Still, her books brought her the fame, but her paintings were little-known. Today, Jansson’s wall painting can be found in Helsinki and Hamina Town Halls and other places.

Young Tove liked men’s company and was even engaged to a Finnish journalist and critic. However, the engagement was broken off. As the writer turned 35, she realized she was bisexual; from that time, she was only seeing women.

The artistic circle where the writer belonged was tolerant to same-sex affairs while the Finnish society of that epoch reacted negatively. Thus, Tove and her lover Tuulikki Pietilä had to hide their relationship from the public.

Tove and Tuulikki met in Paris where Pietilä attended an art academy. In 1956, the women started living together and never separated for 45 years. For the first time, they told the press about their relationship in 1993. Before, Jansson always gave the same answer to the questions about her personal life: she did not approve of the institution of marriage.

In summer 2001, Tove Jansson died of a blood-stroke.

The President of Finland expressed the condolences to the writer’s relatives and emphasized that Jansson’s contribution to the world’s culture was the greatest after the epos Kalevala. The day the writer’s funeral took place, the mourning was issued in the country.

“It was a good idea to do things before you forgot that they had to be done.”

“Someone who eats pancakes and jam can't be so awfully dangerous.”

“You must go on a long journey before you can really find out how wonderful home is.” 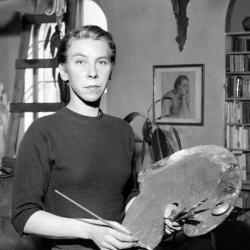