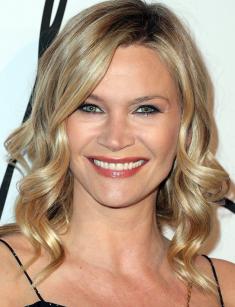 The audience knows the American actress Natasha Henstridge for the roles of the fantastic (in all meanings of this word) beauties: her characters are explicitly sexy; their movements are rapid, and their behavior is impossible to predict. Apart from aggressive blondes, the artist has played more sophisticated characters, yet people remember and love her for the fantastic roles.

Natasha Tonya Henstridge was born on August 15, 1974, in Springdale, Newfoundland and Labrador, Canada. The would-be actress’s mother, Helen Henstridge, was a housewife; the father, Brian Henstridge, worked as a manager and owned a business. Natasha has a younger brother, Shane.

The family lived in a trailer parked among other mobile residences in Fort McMurray, Alberta. By 14, Natasha felt sick of everything: the small van, the provincial town, and old dresses that covered the young woman’s attractive body. As soon as Henstridge got the second place at the Casablanca Modeling Agency's Look of the Year competition, she went to Paris to develop her career.

The French edition of Cosmopolitan published 15-year-old Natasha’s photo on its cover. Besides, the young woman was good at commercials; she participated in the videos for Old Spice and Lady Stetson. She liked to work in front of cameras. At 19, Henstridge moved to America and began her acting career without quitting the modeling business.

In 1994, Henstridge and MGM — UA signed a contract for three movies. The next year brought the first one, the fantastic action movie Species; this is where the artist’s martial arts skills came in. As the story runs, Natasha’s character, incredibly hot and aggressive Sil, flees from the laboratory. While scientists and the service surveillance are looking for the human and alien hybrid, the species herself wants to breed and easily seduces men; she also kills enemies without much effort.

The movie became popular and brought the significant box office; many teenagers had Sil’s posters in their rooms. The actress received MTV Movie Awards for Best Kiss: the aggressive creature was kissing her fiancé and pierced his head with her tongue. Besides, the woman got the nominations for The Stinkers Awards – Worst Actress and MTV Movie + TV Awards – Best Breakthrough Performance.

Following the success of Species, the creators presented the sequels in 1998 and 2004; they were less popular among the audience. However, the third part brought Henstridge, who played Eve, the 2005 DVD Exclusive Awards as the Best Supporting Actress. The same year, the artist’s overall achievements were awarded at the Temecula Valley International Film Festival.

After the role of the beautiful alien, Natasha received many similar offers. She appeared in the action movie Adrenalin: Fear the Rush starring Christopher Lambert and Maximum Risk with Jean-Claude Van Damme. Femme Fatale magazine put Henstridge above other actresses who played in movies of the same genre.

Natasha managed to break the stereotype. In 1998, she personified the main character in the melodrama Bela Donna by the Brazilian director Fábio Barreto; soon, she appeared in The Whole Nine Yards (2000) and its sequel The Whole Ten Yards (2010). Although she had some prejudice against sci-fi projects, the woman accepted the offer and starred in John Carpenter’s Ghosts of Mars (2001). Both critics and the audience did not like it.

Natasha has been actively involved in TV series and shows on Lifetime channel; for example, she participated in the Lifetime movie Widow of the Hill. She had the lead role in the extended version of the video game Command and Conquer 3: Tiberium Wars. In 2007, Henstridge was a jury member of the first annual Noor Iranian Film Festival. The next year, she gained the Gemini Award, the Canadian analog of Emmy, for the mini-series Would Be Kings.

The woman married for the first time in 1995; the American actor Damian Chapa who was eleven years older than Natasha became her husband. The couple spent only a year together.

In 1996, the actress’s American colleague Liam Waite became her boyfriend; they never married, though. Two children were born in this family: the sons Tristan River (born October 1998) and Asher Sky (born September 2001). When their parents divorced, the kids stayed with their mother.

Natasha and her sons like to ski and travel; they often cross the ocean together as the woman works as a model in Europe.

In 2004, Henstridge began to date the Scottish singer Darius Campbell. Their wedding took place on Valentine’s Day in 2011; they filed for divorce on July 23, 2013.

Natasha’s dimensions have changed now: she has put on some weight due to an autoimmune disorder, Hashimoto's disease. There are no nude photos of the actress on the Internet.

Some fans wonder if the British actress Elizabeth Henstridge is related to Natasha; she is not. Even if the actresses’ ancestors had the same bloodline, it was long ago.

In November 2017, Henstridge joined the #MeToo movement and accused the director Brett Ratner of sexual assault. The actress claimed the man forced her to have oral sex with him more than 20 years ago.

According to the woman, they had a date in the early 1990s and went for a walk together; later, Ratner would not let her out of the house until she surrendered:

“At some point, I gave in and he did his thing”.

The director did not confess guilt and hired a lawyer to charge the actresses Olivia Munn, Katharine Towne, Jaime Ray Newman, and Natasha Henstridge.