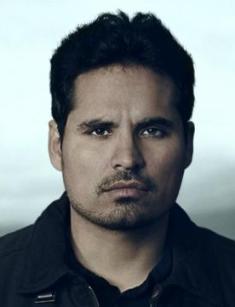 Michael Peña can boast a large filmography with many discussed movies. The actor looks natural in every genre, from fantasy to hard-boiled actions.

Michael Antony Peña has Mexican roots. His mother, Nicolasa, is a social worker, and the father, Eleuterio, used to be a button factory employee. The boy attended Hubbard High School and got hired at a bank after graduation. Whenever he had free time, the young man went to auditions: he took an interest in cinematography early. Eventually, Peña made up his mind to build a professional acting career.

The artist debuted in the low-budget children’s movie Running Free. Further on, Michael surpassed a hundred candidates for the drama To Sir, with Love about a teacher who was given the most troubled class in the school. The young actor did not reject long soap operas and participated in Aaron Spelling’s 7th Heaven with Jessica Biel, the detective Homicide: Life on the Street starring Daniel Baldwin (Alec Baldwin’s brother), and Profiler with Julian McMahon.

In 2000, Michael participated in the popular action Gone in 60 Seconds appreciated by car lovers all over the world. As the story runs, Nicolas Cage’s character steals several expensive and rare cars within a minute to save his brother.

Cage and Peña had another opportunity to collaborate in Oliver Stone’s World Trade Center. Their characters, police officers, risk their lives to save people from the ruins of the World Trade Center on September 11, 2001. Jake Gyllenhaal’s sister, Maggie Gyllenhaal, played the wife of Michael’s character.

Peña also knew her brother: they appeared in Homicide: Life on the Street. In 2012, the creator of The Fast and the Furious and Street Kings David Ayer gave the actors the lead parts in the mockumentary End of Watch. The project pictured the daily routine of the police patrol, men’s friendship, and overconfidence that led to a tragedy.

2004 was a significant year for the artist: he received the lead part in Paul Haggis’s drama Crash. It raised the topic of social problems and people separated due to their racial, religious, legal, and other differences. The project won three Academy Awards and two BAFTAs; it also had two nominations for the Golden Globe. Michael’s work was also appreciated; he gained the ALMA Award for Outstanding Actor in a Motion Picture.

The same year, Haggis and Clint Eastwood created the sports drama Million Dollar Baby and invited Michael again. The main character (Hilary Swank) is going to become a professional boxer. The former athlete and coach (Morgan Freeman) makes the woman the WBA leader; when she has trauma in an unfair fight, he helps her end her life.

The next year, the artist took part in the famous police projects about the officers led by alternative moral values: CSI: Crime Scene Investigation and The Shield.

Alejandro González Iñárritu’s Babel was another outstanding project that won the Academy Award, BAFTA, The National Board of Review of Motion Pictures, and Satellite Awards; it also had numerous nominations for the Screen Actors Guild and Cannes Film Festival Awards.

Later, Michael played an innocent convicted of murder in the thriller The Lincoln Lawyer; the horror The Vatican Tapes brought the role of a priest. The latter movie was produced by Chris Morgan who worked on The Mummy, five parts of The Fast and the Furious, and the action Wanted by Timur Bekmambetov.

Once again, the artist played a police officer and took a gun in the black comedy War on Everyone starring Alexander Skarsgård. The artists personified the policemen above the law: they could beat suspects, do coke, and intend to take money when they learn about a robbery plan.

In 2006, Michael Peña married his colleague, the actress and screenwriter Brie Shaffer. A couple of years later, the spouses became parents: their son Roman was born. Michael has posted a few family pictures on Instagram; the majority of photos are funny or work-related moments.

Michael and Brie remind of Nicole Kidman and Tom Cruise when they visit social events together because of their height difference. The actor’s height is 5.58 feet (170 cm.), and his weight is 158.73 lbs. (72 kg.).

Peña likes to play the bass guitar in a group in his spare time; he also plays golf and boxes.

The audience was not much impressed by the 2017 comedy CHiPs where Michael Peña and Dax Shepard personified funny fellow officers. The sequel Ant-Man and the Wasp enjoyed much more appreciation.

It was a new story from the Marvel cinematic universe that gave life to many popular superheroes: Spider-Man (Tom Holland), Captain America (Chris Evans), Hulk (Mark Ruffalo), and the Guardian of the Galaxy (Chris Pratt). Peña played Luis, Ant-Man’s friend, who helped steal the hi-tech costume and assisted in other adventures. Michael Douglas, Paul Rudd, and Evangeline Lilly starred in the project as well.

The fantasy A Wrinkle in Time united top movie makers: Jennifer Lee, the creator of Frozen, wrote the script; Ava DuVernay (Selma, 13th) directed it, and the composer Ramin Djawadi (Westworld, Game of Thrones) was responsible for the soundtrack. Storm Reid who had participated in the Oscar-winning 12 Years a Slave played the main character. However, even the presence of Oprah Winfrey, Chris Pine, and Reese Witherspoon could not save the movie from unfavorable reviews.

Michael’s character from the fantastic movie Extinction had to survive through the nightmare that became real: aliens invaded Earth. In the military drama 12 Strong, the artist personified an American special forces soldier who had to go to Afghanistan and fight the Taliban members. Michael Shannon (Man of Steel, Batman v Superman: Dawn of Justice) and Chris Hemsworth (Thor in the Marvel movies) became his stage partners.