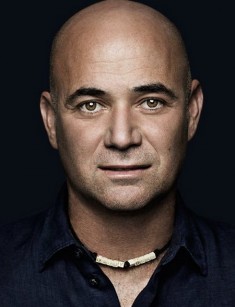 Andre Agassi won all tennis titles possible. According to BBC, he is the greatest sports star. Agassi is the first man who won the Golden Grand Slam; today, he is a successful businessman and generous philanthropist.

Andre Kirk Agassi has Armenian roots. His grandfather David Aghassian lived in Kiev; later, he went to Iran and changed his second name. The athlete’s father Emmanuel was born in Salmas and became a boxer. He participated in the Olympic Games and Helsinki and never returned home: he migrated to the United States where he took the name “Mike Agassi.” Later, he married Elizabeth Dudley. They had four children: the daughters Rita and Tami and the sons Philip and Andre.

The boy’s second name, Kirk, was given to him in honor of the millionaire Kirk Kerkorian who helped Mike with work to thank the boxer for protecting his wife from a hooligan.

When Andre was born, he was diagnosed with the lumbar vertebra displacement. For this reason, as well as because of traumas, Agassi had to have injections in the last years of his sports career. In his book Open: An Autobiography, he described how painful the procedures were.

At the age of three, Andre spent four hours per day training; at five, he participated in his first tournament. When the boy turned eight, the father began to take his son to matches all over the country: there were no undefeated opponents in his home state. Bobby Riggs and Harold Solomon were the talented boy’s sparring partners. Six-year-old Agassi gave his first autograph to the Romanian tennis star Ilie Năstase.

When Andre was eleven, Mike sent the boy to the Nick Bollettieri Tennis Academy where he would be far from temptation: he started to look at girls. Bollettieri was famous for the army discipline. The family had no money for the studies, but Nick personally took the child prodigy free of charge as soon as he saw him play.

Andre Agassi was almost expelled from the academy for misbehavior. The school leader saved him and used the power of veto. Later, Agassi said he would not need the “rubbish” they taught him at school; the boy was interested only in tennis. Thus, the athlete’s education included only eight grades.

In 1986, Andre Agassi began his professional career at the Pilot Pen Classic Grand Prix. In the first match, the young genius defeated the opponent who was 13 years older and lost to the number three tennis player in the world Mats Wilander. Another competition followed soon; Andre won his first prize money, $1000. Later on, he signed the first $45000 contract with Nike. Today, the athlete’s fortune is estimated at $200 million.

At that period, the player developed his own style: long hair, jeans shorts, colorful T-shirts, and bandanas. He used to ignore Wimbledon because only white uniform was allowed there. After the athlete won the 1999 French Open, he wore no underwear during his matches.

At 17, Agassi became number 17 player; the next year, he topped the rating and won recording 22 games in a row. Only Rafael Nadal surpassed that result 17 years later.

In 1990, Andre won the first Davis Cup. By 1993, he had participated in all Grand Slam tournaments except for Australian Open. In 1995, he went to Australia and won immediately. The next year, he became the third American Olympic champion in tennis. President George Bush was honored to play with his compatriot.

Further, there was a decline in Andre’s career, and he dropped out of the top hundred players. It took him a year and a half to return his positions. In 1999, he defeated Patrick Rafter, won the US Open and the French Open, as well as other three tournaments.

The American athlete had 17 prizes from 22 Masters tournament. He became the first Grand Slam winner in all types of tennis courts: grass, hard, and clay.

In the national tournament, Agassi participated for 21 years with no breaks. In the 2000s, he became the oldest top-five player after Jimmy Connors.

The rivalry between Andre Agassi and Pete Sampras was the jewel of the big tennis history. Andre mentioned he would hardly achieve so much if he had not this major opponent. In singles, the score was 20:14 in favor of Pete; Andre spent 101 weeks in the top position while Sampras did the same for 286 weeks.

The audience favored eccentric Agassi; Pete was unsmiling and reserved. There was tension between the athletes in real life. Only as long as both players “retired,” they relaxed and found the common language.

In September 2006, Agassi performed at the ATP tournament for the last time. Many people were expected to watch the star’s finishing match, and games were scheduled for the evening. The game against Benjamin Becker was held at noon, for everybody believed the match between Andre and Andy Roddick would be exciting. Still, the American player did not defeat the German. After the game, people applauded Agassi to say good-bye.

Agassi’s personal life lacked stability for a long time. The tall, athletic man did not look like a Hollywood star, yet his charm was amazing. Andre’s father used to say crowds of women followed his son.

The actress Brooke Shields became Agassi’s first wife. The man saw her photo in 1981 in the room of his sister’s fiancé. Later, their mutual friends introduced Andre and Brooke. Their wedding cost $2 million; global celebrities were invited to the ceremony.

The marriage lasted only for two years. When Andre met Shields’s mother, he felt the married life would not work out; his hunch was right. Both women viewed the birth of children negatively because they believed it would interfere with Shields’s career.

Andre had been admiring Steffi Graf for a long time, but the woman’s heart belonged to the Formula 1 driver Michael Bartels then. The athletes got close in 1999 at the Roland-Garros.

At that time, the tennis player did not draw attention to his wedding: only the groom’s and the bride’s mothers were present at the ceremony. A week after the wedding, the couple’s son, Jaden Gil, was born. In 2003, the daughter Jaz Elle was born.

The family lives in Las Vegas, although Graf considers Germany her native country and regularly goes there. The former athletes administrate a children’s charity fund that builds schools in deprived areas.

Agassi is a spokesperson for several brands from fast-food to Swiss watch. Besides, he owns construction and entertainment businesses.

In spring 2017, Agassi joined Novak Djokovic’s coaching staff. The Serbian player used to be coached by Boris Becker and Marián Vajda. Andre had never been a personal coach before. As Agassi talked to Novak, he refused the offer at first, but Steffi encouraged him to try and see whether he would like it.

According to the former number one tennis player in the world, the student paid nothing for the famous coach’s lessons. More than that, Andre spent his own money to help. He emphasized that it was useful for tennis when Djokovic demonstrated his best playing; Agassi hoped to contribute to that by coaching.

In a year, the sports stars stopped collaborating. According to Agassi, he and Djokovic had different opinions too often. In his interview for Wimbledon.com, Andre Agassi said he would like to coach more and share his 20-years experience, especially if his potential student was ready to listen. 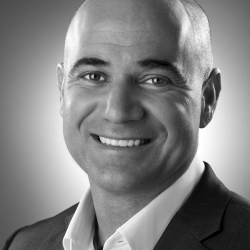