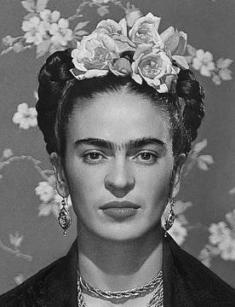 The genius Mexican artist Frida Kahlo was often called the female alter ego of Salvador Dali. Critics ascribed her to surrealism, but the woman refused to have anything to do with that. According to Kahlo, her art was not based on ephemeral allusions and paradoxical combination of forms – it was the pain of loss, disappointment, and betrayal driven through personal perception.

Magdalena Carmen Frida Kahlo y Calderón was born on July 6, 1907, three years before the Mexican Revolution. The parents lived in Coyoacán, the suburban area of Mexico City. The mother, Matilde Calderón, was an unemployed Catholic fanatic who held in leas her husband and children. The father, Guillermo Kahlo, worked as a photographer and worshipped Beethoven and Schopenhauer.

Six-year-old Frida had poliomyelitis; as a result, her right leg was thinner than the left one by several centimeters. Peers gave her the humiliating nickname “wooden leg” and bullied the girl, but Magdalena’s character toughed up. From spite, the girl played soccer with boys, overcoming her pain, swam, and did boxing. Besides, the future artist could mask her peculiarity skillfully: long skirts, men’s suits, and several stockings put together.

Little Frida did not dream of becoming an artist. She wanted to be a doctor and entered the National Preparatory School at 15 to study medicine. The young talent was one of 35 women who were receiving the same education as thousands of men.

In September 1925, 17-year-old Magdalena’s life turned upside down: she was inside the bus that collapsed a tram. Metal railings pierced her belly and uterus; the woman’s spine was broken in three places, and the crippled leg was broken in eleven spots.

The would-be artist spent three weeks in a hospital, unconscious. Although doctors believed her traumas were fatal, the father was not leaving his daughter’s side; he saw every breath as a victory. The mother never came to visit Frida.

The miracle did happen, and Frida came back to her senses. She felt an urge to paint, and the father made a specific canvas stretching so that the young woman could work lying. Besides, the man put a large mirror under the bed valance: Frida could see herself and the space around.

The next year, Frida created the first sketch in pencil and pictured the catastrophe that hurt her body and soul. She entered the communist party in 1928. The next year, when the young talent recovered, she entered the National Autonomous University of Mexico; her love of art reached its peak. Magdalena spent all days in the art school and dressed exotic garments in the evening to hide her injuries and attend parties.

Graceful and sophisticated, Frida was holding a glass of wine and a cigar; her indecent jokes made party guests laugh out loud. The contrast between the impulsive, cheerful woman and her desperate works was striking. According to Kahlo, the chic of beautiful clothes and the gloss of flowery phrases were hiding her disabled soul that she showed only in her paintings.

Frida Kahlo became famous for her unique self-portraits (more than 70 canvases) notable for the unibrow and lack of smile. The artist often included national symbols, for example, in Self-portrait on the Borderline between Mexico and the United States and Self-Portrait as a Tehuana.

She was not afraid to unveil her own and other people’s suffering: Without Hope, My Birth, A Few Small Nips (Passionately in Love). In 1939, Kahlo’s fan asked her to create a painting in memory of their mutual friend, the actress Dorothy Hale, who had committed suicide and jumped out of the window. Thus, The Suicide of Dorothy Hale came to existence. The requestor was horrified: Magdalena presented the jumping scene and the blood-covered body rather than a beautiful portrait for comfort.

The Two Fridas was another notable piece of art; the artist created it after a short break-up with Diego. She portrayed her inner self in two persons: Mexican Frida, whom Rivera loved passionately, and European Frida, whom he rejected. The pain of the loss can be seen in the bleeding artery that connects the figures’ hearts.

International recognition came in 1938, when the first exhibition was held in New York. However, the artist’s health was deteriorating; it reflected on her art. The more often Frida had surgery, the darker her canvases got: Thinking About Death, Girl with Death Mask (She Plays Alone). Post-op periods brought many paintings with some biblical echoes: The Broken Column and Moses.

By the moment the artist’s exhibition took place in Mexico (1953), the woman could not walk. The day before the opening, all paintings were moved around, and the beautiful bed where Magdalena was lying became an integral part of the display.

A week before she passed away, Frida created the still life Viva la Vida that showed her attitude toward death.

Kahlo’s paintings influenced the modern art to a large extent. In 2014, the exhibition Unbound: Contemporary Art After Frida Kahlo was held at the Museum of Contemporary Art in Chicago; one could see present-day works inspired by Frida.

Frida met her future husband, the Mexican artist Diego Rivera, when she was a student. Their paths crossed again in 1929; the couple married the next year. Magdalena was 22, and Diego was 43; contemporaries called their union the “marriage between an elephant and a dove” – Rivera was much taller and fatter than his wife. However, no woman could resist the man’s charm.

Frida knew that her husband cheated on her. She did the same in 1937 when the affair with Leon Trotsky began. The artist called him “little goatee” for his gray hair and beard. The politician came to the spouses’ house when he fled from the Soviet Union – the zealous communists and kind people gave Trotsky a shelter. Everything ended with a great scandal, and Trotsky left their house. Besides, rumors had it Frida had a romance with the poet Vladimir Mayakovsky.

The artist’s romantic relationships remain a mystery. The singer Chavela Vargas was probably one of her lovers. The speculations began after the women’s frivolous photos appeared: Frida was wearing men’s clothes and found comfort in Vargas’s arms. However, Diego did not pay attention to his wife’s interest in women: it seemed shallow to him.

Although the spouses’ life was not exemplary, Kahlo dreamed of children. She did not have the chance to become a mother because of her traumas: Magdalena kept trying to get pregnant, but three attempts finished with miscarriage. The artist began to paint children, most of them dead (Henry Ford Hospital), to accept her sad destiny.

Frida Kahlo died on July 13, 1954, a week after her 47th birthday. Lung inflammation was the cause of death.

The artist’s funeral ceremony was pompous; it was held at the Palacio de Bellas Artes. Many artists and writers attended it; even the former President of Mexico, Lázaro Cárdenas, came. The woman’s body was cremated; the urn with the ashes is stored at the Frida Kahlo Museum.

The artist’s last words in her diary were as follows:

“I joyfully await the exit – and I hope never to return – Frida”.