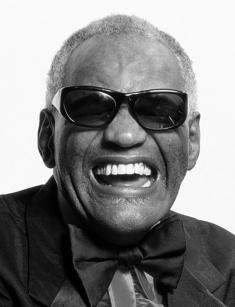 Ray Charles is an American piano player, singer, and songwriter who mixed jazz, blues, rock’n’roll, and сountry genres. Charles’s genius made him one of the best musicians of the 20th century and the symbol of the American culture. Rolling Stone magazine put him on the tenth position in its 100 Greatest Artists of All Time and the second one in 100 Greatest Singers of All Time.

Ray Charles was born on September 23, 1930, into the family of Aretha and Bailey Robinson. Soon, the parents broke up, and the mother moved from Georgia to Greenville, South Florida with her children. The family lived in poverty. When Ray was five, his younger brother George drowned; the elder boy could not save him.

After the tragedy, Ray’s eyesight deteriorated; he got blind by seven. However, the boy had to go on and went to a boarding school to develop his music abilities: Charles sang in a choir and learned how to play the piano, organ, saxophone, trombone, and clarinet. When the parents died, the blind young man had to find his place in life on his own. 17-year-old Ray founded the group MacSon Trio; in 1949, the musician’s song became a hit for the first time.

The artist got his official stage name in the 1950s: he got rid of the second name to avoid the association with the boxer Ray Robinson. Charles was looking for his own style and made every song unique; as he was experimenting with his voice, the singer included rattling, screaming, and other sounds to add an emotional expression of lyrics.

In 1955, the man’s soul single “I Got a Woman” made him the leader of R&B charts. At that time, Ray performed gospels and blues ballads; he opened the beauty of the traditional “black” music to everyone.

“What’d I Say” was the first significant song created by Ray on his own; it became the rock’n’roll classic. The musician collaborated with large orchestras, jazz artists, and experimented with the country style; he won Grammy for his contribution. Powerful, dimensional, and expressive, the vocalist’s voice amazed music critics and ordinary listeners.

By the early 1960s, the musician earned so much that he had the opportunity to undergo a full medical examination with top doctors and purchase a luxurious mansion in The Golden Triangle, Beverly Hills. However, Ray could not have his eyesight restored even partially.

As long as the singer was free to create, he began to collaborate with other musicians. The iconic song “Hit The Road Jack” was performed with Margie Hendrix. The composition topped music charts for two weeks; it was so popular that even the Soviet Union knew it.

At the same period, Ray recorded his “trademark” song “Georgia On My Mind”. Initially, the creator of the song, Hoagy Carmichael, devoted it to a woman named Georgia. However, it was Charles who turned the song into a great hit; people living in Georgia, US called it their hymn.

After the 1970s, Ray Charles continued to give many concerts and focused on country compositions. In the last decades, he used some electronic instruments and mixed the music of various peoples that inhabited the United States. The classic song “America the Beautiful” was reborn thanks to Ray’s performance and gospel and rhythm-and-blues arrangement.

The musician loved women; nine of them were the mothers of his children, and only two became his wives. Ray married Eileen Williams on July 31, 1951, and spent a year with her. The second marriage to Della Beatrice Howard Robinson lasted for 22 years (1955-1977); three kids were born in this family: David, Ray Charles Robinson Jr., and Robert.

Apart from that, Charles had nine out-of-wedlock children. The father gave each of them a million dollars before his death. Norma Pinella was the artist’s last partner.

The last two years of Ray Charles’s life were darkened with oncology; the post-op recovery was hard. However, when the musician could not walk, he continued to work on the album Genius Loves Company and visited his own recording studio RPM every day.

Ray Charles died on June 10, 2004, in his house. He was buried at Inglewood Park Cemetery, Inglewood, California.

In fall, 20 thousand people gathered together at the Los Angeles concert in memory of the singer. Famous musicians performed his iconic songs. The same year, in October, the biopic Ray starring Jamie Foxx came out; it was based on the autobiography Brother Ray published in 1978. Foxx won the Academy Award for this project; sometimes, people mistake screenshots from the movie for Ray Charles’s pictures.

The second posthumous work included new songs with pop and soul stars. In the third album, the computer sound editing was used; the singer’s vocal parties were restored and combined with the music performed by Count Basie’s orchestra. Concord Records continues to manage Ray’s old recordings and give fans the opportunity to enjoy his talent in a new form.

Ray Charles’s net worth was about $100 million.