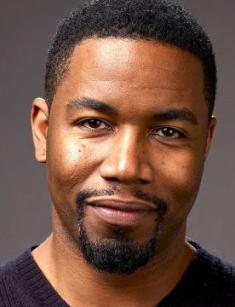 Michael Jai White is an actor, producer, director and screenwriter, the owner of seven black belts in different styles of martial arts. Michael's biography is similar to the American dream: he came a long way from poverty to recognition and glory on his own. White is familiar to movie fans for such works as Tyson, Spawn, The Dark Knight, Blood and Bone, Black Dynamite, etc.

The famous actor and master of martial arts was born on November 10, 1967, in New York, Brooklyn. As you know, this city is full of contrasts: on one side you can see luxury hotels, restaurants and citizens, flaunting diamonds and on the other hand, there is social inequality and poverty.

The future actor was not lucky because he grew up and was brought up in slums, watching the real Mexican passions all his childhood.

"I was not six but I had already seen so many people killed that I began to consider someone else's death to be something of a life norm. I had immune to human pain and blood. I had a protective spiritual callousness and maybe it helped me to survive," the actor admitted in an interview.

The boy was brought up by his mother, who regularly changed her place of work to feed her family. His mother was offered a position in another city, so the woman had to move to a neighboring state with Michael, when White was seven years old. But the life of the future performer was not like a fairy tale there: there was the same weak quarter with the laws of the jungle and the same deviant behavior.

But there was no choice. White recalled that he and his mother rented an apartment, where the bully Troy Alves lived in the neighborhood, who always bullied him. But Michael could fight his opponent on his own. As you know, there is one step from hatred to love, so it is not surprising that the boys are real friends.

White grew up an active child and was fond of sports from an early age. According to rumors, Michael began to be interested in martial arts after watching the action movie Five Fingers of Death (1972). The boy had to practice martial arts at home on his own because there was no money for special karate classes in his family. Troy helped him who attended the section of Japanese martial art.

When the young man was 14 years old, he left his mother's apartment and began to live with his friend, who was killed a month later with a gun. It is noteworthy that White has two combat wounds from bullets. Michael never started the fight; however, he showed his skills in conflict situations.

White did not choose a creative and even a sports profession: he began working at school for children with an emotional personality disorder, after graduating from college. Michael was on the list of the best teachers. He had a normalized schedule and a stable income. However, White was forced to reconsider his life priorities when he got constant offers from directors (who invited him to get episodic roles in low-budget thrillers).

Michael eventually resigned from the school and began to seek happiness in acting after working for three years. Michael Jai White had to play episodic characters, before playing the central role like many actors because, as you know, the way to fame is thorny. In 1989, Michael Jai White first appeared on television. There were the fantastic tapes The Toxic Avenger Part II and The Toxic Avenger, Part III: The Last Temptation of Toxie (1989).

Then in 1991, the performer briefly lit up in the comedy-drama True Identity. Besides, he played in the favorite action movie Universal Soldier (1992) with Jean Claude Van Damme and Dolph Lundgren, as well as Full Contact (1993), Ballistic (1995) and other tapes.

In 1995, the TV star (Michael is 6 feet (183 cm) tall and weight 202-213 lbs (92-97 kg)) was lucky: Uli Edel called White to star in the biographical drama Tyson, the tape tells about the hard life of one of the most recognizable athletes in the history of boxing. Tyson's fans learned that Mike had hardships of fate, before becoming the world champion.

The young man had a lot of offers from the directors after this role: White appeared on the set every year. Thus, he starred in the Western Shaughnessy and the comedy thriller 2 Days in the Valley in 1996 and he played in the crime drama City of Industry in 1997. Michael participated in the fantasy movie Spawn the same year, which was based on the comics of Todd McFarlane.

It is noteworthy that Michael Jai became the first black actor, who was lucky enough to transform into a superhero in front of the director's cameras. The plot of this Gothic blockbuster with an abundance of cruelty and blood tells the story of a CIA agent, who was killed by his head. The agent goes to purgatory and makes a deal with the devil after death.

The TV star showed that he could play any role. For example, he appeared on the image of a brutal crime boss Gambol in the blockbuster The Dark Knight (where the actor starred with Christian Bale, Heath Ledger and Morgan Freeman) and White played a master of kung fu in the drama of Quentin Tarantino `s Kill Bill: Vol. 2.

Also, he participated in the filming of Undisputed II: Last Man Standing together with Scott Adkins in 2006. It is noteworthy that the plot of the tape is around a boxer, who was in a Russian prison. Among other things, Michael established himself as a voice actor, whose voice can be heard in the animated series Static Shock (2003-2004), Justice League (2003-2005), Ghetto Stories (2010), Black Dynamite (2011-2015), etc.

In the summer of 2005, Michael proposed to his girlfriend Courtney Chatham and the couple had the daughter, Morgan Michelle three years later (also, the performer has two sons from his previous marriage).

But, fortunately, or unfortunately, the couple broke up. It is known that Morgan Michelle followed in the footsteps of her father: the girl goes to karate training and became the owner of the yellow belt at the age of six.

Michael is in the marriage with the actress Gillian White. The TV star often puts photos with his beloved on Instagram: they attend social events together, dine in restaurants, watch boxing and travel. Here's a comment, written by the actor under one of the photos with Gillian:

"You know how you can love someone to death but you want to be alone in some cases? Good thing that it hasn't happened to us yet. We still love each other. Cupid shot us with an AK-47!"

In 2016, Michael Jai White participated in several tapes: the thriller Beyond the Game, Never Back Down: No Surrender, in the horror movie The Crooked Man and the drama Chocolate City: Vegas Michael Jai White has an estimated net worth of $3.5 million.

Four tapes with the performer will be released in 2017: S.W.A.T.: Under Siege, Accident Man, Triple Threat and Cops and Robbers.