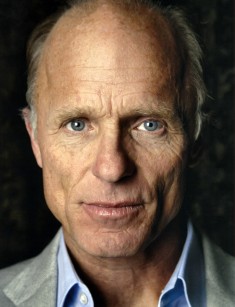 Ed Harris is an American actor and director. He gained popularity starring in the films The Abyss, Apollo 13, The Rock, The Truman Show, A Beautiful Mind, A History of Violence and Appaloosa. Ed Harris received four Academy Award nominations but did not win this statuette. However, he won the Golden Globe Award twice.

Ed Harris was born on November 28, 1950, in the state of New Jersey. At first, his father worked as a salesman, and in his free time, he sang with a choir. After a while, the man opened his shop. The mother of the future actor worked in a travel agency.

Ed's family was not connected with the theater and cinematography, so he did not think about the stage. At school, he was more interested in sports. Harris played baseball and American football and showed good results. He even won an athletic scholarship, which gave him the right to study at Columbia University, one of the best universities in America. The boy took advantage of this chance, but soon he lost interest in a sports career and training.

Ed Harris tried to learn to play the violin but quickly gave up the lessons. The man said he took pity on his dog, which was horrified at his playing and huddled itself up in a corner.

In 1971, Harris left the university and went to Oklahoma where his family lived at that time. He entered the local university, began to participate in student productions and liked it so much that he decided to become a famous Hollywood actor. Keeping his fingers crossed, Ed Harris left the university, packed his suitcase and moved to Los Angeles. Nevertheless, he became a professional actor because later, the man graduated from the California Institute of the Arts.

Ed Harris says that if he had not become an actor, he would have become a history teacher.

Ed Harris began his acting career with bit parts in movies and TV series that were not popular with viewers. His first prominent work was the film Coma, released in 1978. Ed played a small role, but he gave one hundred percent.

For the following few years, he did not have progress in his career because Ed played in low-budget projects. The prominent work of this period is the drama The Right Stuff, released in 1983. The indifference of the directors did not upset Ed Harris very much because he performed in the theatre.

In 1989, the situation changed when the actor was cast in the thriller The Abyss. After the release of the movie, he became a famous and in-demand actor who received several tempting offers from directors. Since then, he has filmed in several projects a year.

In 1993, the actor played in the Oscar-winning crime drama The Firm with Tom Cruise in the title role. The plot of the film is based on the novel of the same name by John Grisham and tells about a law firm secretly working for the mafia clan.

Hummel’s squad went on secret missions, and later the commander found out that the families of the dead soldiers did not receive compensation because there were no secret missions according to official documents. The outraged comrades of the killed soldiers, led by the commander, steal deadly VX gas-armed rockets, seize control of the abandoned Alcatraz island and take a group of tourists hostage.

In that film, people got a good look at Harris’s facial and body features. The actor looked impressive, frightening and tall, although Ed Harris's real height was 175 cm.

In 1998, Ed Harris played the role of director Christof in the drama The Truman Show. This film recognized the dramatic talent of the Hollywood comedian, Jim Carrey, and became the landmark movie for the Hollywood cinema. Directors continue to shoot films, which are based on The Truman Show, and even the disease was named after it.

Harris received four Academy Award nominations, but he has never won the coveted statuette. The actor was also nominated for the Golden Globe Award four times and won the prize.

Ed Harris’s filmography includes more than 70 prominent roles. The best of them are the films A Beautiful Mind, The Hours, Radio, A History of Violence, Pollock, The Truman Show, and others. The major project in the actor’s career was the film National Treasure: Book of Secrets. The blockbuster was released worldwide in 2007 and grossed more than $ 450 million making three times its budget.

Ed Harris does not like to tell about his personal life and carefully hides it from the general public. The actor has succeeded in it up to this point. Unlike many Hollywood stars, he is an exemplary family man. He has been living with his wife, Amy Madigan, for 33 years. They met in the autumn of 1983 while filming in Places in the Heart. It was not the only collaborative work of the couple because they starred together in four more films.

Six months after the wedding, in the spring of 1983, Harris had a daughter, Lily Dolores. She has already grown up and become an independent woman.

The actor's hobby is sleep because he doesn’t have enough time due to his busy schedule. He values freedom most of all but says that it is not something people should shout about. Ed Harris is a complex person. He says that it is impossible to make friends with him during one evening. But he is cheerful and frank with old buddies.

Ed considers the birth of his daughter to be the happiest day, but he doesn’t like to talk about his childhood. The actor jokes that he is not too old to recall it.

In 2016, Ed Harris played the leading negative role of The Man in Black in the fantasy western Westworld. The series is based on the film of the same name by Michael Crichton, released in 1973.

Both films were named after the Westworld amusement park, in which visitors are invited to make a safe journey through the city in the style of the Wild West, inhabited by android robots who are programmed to follow a predefined set of intertwining narratives and entertain guests. At the beginning of each new cycle workers repair robots and erase their memory. The main advantage of the park, which attracts visitors, is that people can do anything with robots, but in return, they cannot harm humans.

There are three intertwining narratives in the series. It tells the story of Dolores (Evan Rachel Wood), a robot girl who is constantly tormented by The Man in Black and who has mysterious program failures that cause the android to go on a journey over and over again, brothel hostess Maeve (Thandie Newton) who has unreconciled memories of a former role, the park's creator (Anthony Hopkins) and the park workers, who are developing new modes of behavior for robots.

In 2016, Ed Harris appeared in the comedy melodrama Rules Don't Apply, and in 2017 in the detective thriller Mother!. Now, the actor is working on the sci-fi project Geostorm. In the disaster film, people launch a system of climate-controlling satellites after a series of cataclysms. But an error occurs in the network of satellites, and the protective system becomes a threat to life on Earth. 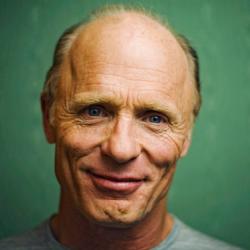