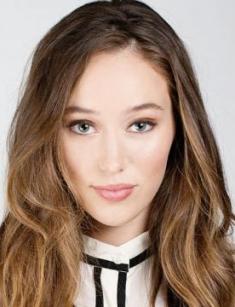 The full name of the actress, whose personality interested moviegoers after post-apocalyptic series The 100 and horror film Fear the Walking Dead, is Alycia Jasmin Debnam-Carey. The further roles in television series McLeod's Daughters and Next Stop Hollywood strengthened her status of arising star in the star factory. Alycia Debnam-Carey has a net worth of $3 million.

Alycia was born in the summer of 1993 in Sydney, Australia. The girl grew up in a family where the mother was closely connected with television. Leona Carey worked as a screenwriter and knew the hidden side of the television world. Alycia is not an only child. The future TV star grew up with a brother named Angus.

Being a daughter of a music teacher, Alycia had a great ear from her father, Jeff Carey. The first instrument that aroused the desire to play music was the violin. Alycia has mastered playing the instrument until she realized that she would like to play the percussions rather than the strings. It is noteworthy that in her early youth Carey mastered the double-bass and learned to rap.

Alycia's parents had noticed artistic talent and creative spark in their daughter what made them take the child to Newtown High School of the Performing Arts. There the 10-year-old girl was cultivated with a sense of beauty and developed talents.

The young artist studied percussion all those years and honed her acting skills. In the early school years, she participated in amateur performances at the school and later in concerts at the Berlin Philharmonic, which were held on the stage of the Sydney Opera House.

In 2011, Alycia Debnam-Carey received a diploma in secondary education and went to Los Angeles, the heart of the global movie industry. At that time, the young actress's filmography already consisted of several works in movies and TV shows.

Alycia's filmography began when the girl turned eight years old. She was casting and got a role in the short film Martha's New Coat, starring Rachel Ward, the actress who is known to viewers for her role as Maggie in the movie saga The Thorn Birds. The movie premiered in the summer of 2003, and Alycia Debnam-Carey for the first time saw herself on the screen. The new actress was strongly impressed by her experience, which strengthened her decision to engage in the movie industry.

The actress appeared on the screen for the second time three years later in the 12th season of the series McLeod's Daughters. 11-year-old Debnam-Carey played the role of Chloe Sanderson in the 6th episode. And two years later, in 2008, Alycia Debnam-Carey starred in two short films. In the years that followed, the Australian star appeared in short films. And even though the projects did not bring the young beauty fame, but in the field of acting, the woman received priceless experience.

In Los Angeles, the Australian’s movie career has developed rapidly. In July 2012, Alycia Debnam-Carey became a Heath Ledger Scholarship Finalist. Ledger, a talented actor and compatriot, made a brilliant career in Hollywood, was nominated, and then received an Oscar after the release of bestsellers Brokeback Mountain (2005) and The Dark Knight (2008).

In the same year, Alycia Debnam-Carey was invited to play a role in the first American project for her. It was a reality show called Next Stop Hollywood. This is a story about six compatriots of Alycia who are storming Hollywood Olympus.

The debut feature film with the Australian actress was released in 2014. Debnam-Carey got the leading role in the thriller Where the Devil Hides. The movie brought actress fame and opened the doors to the world of big cinema.

From that moment, Alycia was willingly invited in full-length projects. She starred in the films Into the storm, Friend Request and Liked. In the first project, which is the film-disaster, the Australian actress appeared in the brilliant company of Richard Armitage and Sarah Wayne Callies.

Autumn 2014 brought Alycia Debnam-Carey another star project, the series called The 100. In the post-apocalyptic drama, the woman got a bright role of Lexa in the second season. The actress appeared on the screen with Australian actors Eliza Taylor and Bob Morley.

The project was broadcast on The CW, and the audience immediately noted the new face of the series, requiring the producer Jason Rothenberg to bring Alycia in the prequel. But it turned out to be not as easy because Debnam-Carey was involved in the spin-off of the zombie drama series The Walking Dead which got the name Fear the Walking Dead.

Rothenberg managed to fulfill the wish of the audience and agreed with the AMC Studio to change Alycia's schedule so that she could work in both projects. In the summer of 2015, at the Comic-Con festival, the director announced that the actress would continue her work in The 100.

After the shooting, Alycia Debnam-Carey said that it was challenging to play the clan leader of the Earthlings, though fascinating. The actress admitted that this work had been the most difficult in her acting career. Debnam Carey's character in the script is a girl of non-traditional sexual orientation. But as soon as Lexa fell in love with Clarke Griffin, who was portrayed by Eliza Taylor, the creators of the series "killed" her.

This on-screen murder angered the LGBT community, whose representatives promised to organize protests. Alycia Debnam-Carey was forced to give an interview in which he thanked fans for their warm interest in the fate of Lexa and asked to accept this fact.

In horror about the walking dead Debnam-Carey appeared in 41 episodes and joined the central part of the multi-series project, which became the most rated in the history of cable television. The actress from Australia got the leading role in the spin-off.

Alycia Debnam-Carey is an active user of social networks. She has authorized accounts on Twitter and Instagram, where her subscribers regularly can see new photos and posts of their favorite actress. But about the personal life of a fragile beauty (with the height of 5'5'' / 165 cm and the weight of 121 lbs / 55 kg) there is not much information.

It is known that for a long time Alycia was dating a guy named Marcus Castrus. Their romantic relationship began in school. But the reason why the couple broke up remains a mystery. According to photos in social networks, fans have not figured out whether the heart of a Hollywood star is occupied now.

Unlike her character Lexa, Alycia doesn't have any tattoos on her body.

During 2018, the actress was working on the set of The Walking Dead prequel, which is shown on the screens at present.

At present Alycia has a net worth of $3 million.

Alycia pleased Instagram subscribers, saying that she played a character named Frances in the new project A Violent Separation, which premiered in May of 2019.