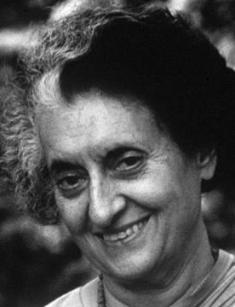 Indira Gandhi was born on November 19, 1917, in Allahabad. The girl’s family was closely connected to politics. Her father was the first Prime Minister of India, Jawaharlal Nehru; her grandfather was the President of the Indian National Congress Motilal Nehru. Indira’s mother, Kamala Nehru, and grandmother, Swaruprani Thussu, were also prominent political figures who survived severe repressions.

This background determined the child’s circle. She met the father of the Indian nation, Mahatma Gandhi, at the age of two, and organized her own working union at eight, following his advice. Judging by numerous pictures, the future politician met him many times later.

The girl was the only child in her family, and the parents paid much attention to her. Indira and her friends often spent time weaving in her grandfather’s house. Because politics played a significant part in the family’s life, she could hear adults talking about the country’s acute problems. When the father was imprisoned, he wrote many letters to his daughter and shared his ethical views, feelings, and ideas about the future of India.

Indira was home-schooled and continued her education in Santiniketan. However, she had to quit soon: the mother fell ill, and the young woman had to accompany her in Europe. Best doctors tried to cure Kamala.

Indira did not want to waste her time and enrolled at Oxford University. Her knowledge of Latin was not so good, and she was accepted to the prestigious university only at the second attempt. In comparison, History, Politics, and Economics were easy for the student.

In 1935, Kamala died of tuberculosis. Indira’s health was frail, and she had to interrupt her studies and go to Switzerland for treatment. One day, the woman could not return to England because of the Nazi; she had to take a long way through South Africa.

Indira became her father’s personal secretary in 1947, after India got its independence and the first national government formed. Jawaharlal Nehru became the first Prime Minister of the country. Although the woman had already had her own family by that moment, she put much endeavor to work and always accompanied Nehru on foreign trips.

After his death in 1964, Gandhi became a deputy of the lower house in the Parliament; later, she was appointed the Minister of Information and Broadcasting. The woman represented Indian National Congress, the largest party in India. In 1966, she became the party’s leader and the second female Prime Minister in the world.

Indira advocated the bank nationalization and the improvement of the relation with the Soviet Union. However, conservative party members did not like these ideas; as a result, Indian National Congress split up. People continued to support the Indian “Iron Lady” and gave her another victory at the Parliamentary elections in 1971. The same year, the USSR came down to the Indo-Pakistani War on the side of India.

The situation deteriorated because of the war against Pakistan: domestic conflicts and economic decline followed. In 1975, the Allahabad High Court demanded Gandhi’s resign and accused her of the violation of the electoral legislation in 1971. However, Indira found an elegant way out and used Article 352(1) of the Constitution: the stage of emergency was announced in the country.

This period improved the things: the economic indexes were higher, and religious conflicts went down.

However, the price was pretty high: political and civil rights were reduced; all opposition titles ceased to exist.

De-fertilization became the least popular measure. Initially, people could volunteer for the procedure and receive money for that. However, the government decided to make every father of three should undergo sterilization; every woman pregnant with the fourth child was to have an abortion regardless of her wish.

Although the high birth rate was the main cause of poverty in the country, this measure was too much: it violated human dignity.

Indira Gandhi got the nickname “Indian Iron Lady”; her quotes are filled with determination. The politician made harsh decisions sometimes and favored centralized systems. Thus, she failed to win the next parliamentary elections in 1977.

Comeback to the politics

Little by little, the woman restored her old popularity. Although her actions used to be too dramatic, the country believed in its Iron Lady again.

In 1980, Indira returned the position of the Prime Minister. She spent her last years working on the country’s international image and led the Non-aligned Movement in India.

Indira Gandhi met her future husband, Feroze, in Great Britain; the couple married in 1942. This union broke the caste and religious traditions of India. Feroze came from the Parsi while the woman belonged to the Kashmiri Pandit, despite the rumors about her Jewish or Kazakh roots. After the marriage, the politician took her husband’s second name; the man was not related to Mahatma Gandhi.

Two children were born in this family: Rajiv and Sanjay. The boys lived in their grandfather’s house mostly.

Feroze died in 1960. Sanjay, who was his mother’s political advisor, died in a car crash in 1980, not long before Indira’s assassination.

In the 1980s, the Indian government confronted the Sikh the majority of whom lived in Punjab. They wanted to become a self-governing territory independent from the center and took the Golden Temple in Amritsar; it has been their main shrine since then. In return, Operation Blue Star was organized; the temple was taken back, and some 500 people died.

Indira Gandhi’s death became the act of revenge from the Sikh. The politician was assassinated on October 31, 1984, by her own Sikh bodyguards. Eight bullets left no chance to the woman. It happened when she was going to the office where the interview with the English playwright Peter Ustinov was going to be held.

In 2011, a documentary about the prominent politician was released in Great Britain.