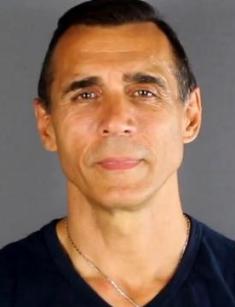 In the early 1990s, people around the world sat on the edge of their chairs, watching the TV series about Duncan MacLeod, an immortal native of Scotland. The role became the main and most successful part for Adrian Paul, who portrayed the last representative of the MacLeod family.

The actor's full name is Adrian Paul Hewett. Unlike his character, he was not born in the mountains of Scotland, but London on May 29, 1959, to Italian and English parents. Adrian was the first child, and then two more boys were born in the family.

In childhood, the main hobby of the future actor was football, and in the late 1970s, he even played for the professional football team in the London Spartan League. Moreover, Adrian was engaged in choreography, attended a theater school, and he began to perform on the stage at the age of 14.

But he was not interested in martial arts in his youth; the young man was carried away by competitions and courtship. Adrian recalled his fighting skills in high school, where he had to fight for girls’ attention.

In 1979, thanks to his attractive appearance, the future actor started a career in the modeling business, which made it possible to visit many European countries. The dancing skills were also useful in this work because Adrian was a choreographer of fashion shows.

In 1985, Paul went to the USA, where the man planned to take a modeling and choreographic career to a new level, but not to conquer the film industry. His friend lived in Hollywood, so the man first went there and a year later continued to attend acting classes.

Adrian admitted in an interview that he met his first agent Lynn Rawlins by chance. One day he talked with an employee of a photo studio, where the future actor came for pictures. Upon learning that Paul was an Englishman, the girl asked if he had thought of playing Bond and why his agent had not yet arranged it.

Adrian admitted that he did not have an agent, and the girl offered to introduce him to a friend working in this sphere. Then Paul decided that the girl just wanted to flirt with him. But she really took the man to the agent, and after three months Adrian got the first role of dancer Nikolai Rostov in the series The Colbys. Speaking about this role, the actor repeatedly ironized that an Italian of English descent eventually played Russian in the American series.

After the debut, the young man played several small and leading roles in movies and TV series. The most ambitious work of this period was the leading role in the television movie The Owl, in which Adrian played the role of a vigilant person who declared war on crime in the city after the tragic death of his wife and daughter.

In 1992, the era of the Highlander began in the biography of the actor. By that time, the first installments of the franchise had already been released. In 1986, the movie of the same name premiered, starring Christopher Lambert as Connor MacLeod, and then its unsuccessful sequel, Highlander II: The Quickening, was released. Adrian was initially invited to create an image of Connor in the series, but the actor persuaded the creators to make a new character. Lambert appeared as a guest star and connected unfamiliar Duncan MacLeod with his hero.

The first season received positive reviews from critics and became popular with viewers. As a result, Highlander: The Series aired for six seasons, and 119 episodes were shot during this time. During the filming, Adrian Paul tried his hand not only at acting but also directing. And the first attempt was already successful. The episode Homeland, telling about Duncan's return to his homeland, was recognized as the best episode of the series.

Due to the popularity of the project, two more attempts were made to return the Highlander to the big screen. Highlander III: The Sorcerer talked only about the character of Lambert, but the next part was the crossover of the series and the movie. So, the filmography of Adrian included the movie Highlander: Endgame. But, after the success of the TV series, the full-length movies of the franchise were not destined to become famous as both films were a box office flop.

After the end of Highlander: The Series, the actor continued to act in TV series and movies, including collaboration with Russian actor and bodybuilder Alexander Nevsky. In 2003, Paul appeared as a demon in the successful project Charmed, but could not repeat the success of his main work. Adrian says that Duncan MacLeod deprived him of other roles because directors and viewers saw the actor only as the 400-year-old Highlander, who, in the end, should remain the last of the immortals.

In 1990, the actor married model Meilani Paul. The marriage lasted seven years and fell apart due to the absence of children and the tight working schedule of Adrian. In 2009, the man proposed to Alexandra Tonelli, whom he had dated for several years before. In this marriage, a daughter, Angelisa Valentina Rose, was born in 2010, and, his wife gave birth to a son, Royce Paul, in 2012.

In addition to native English, Adrian is fluent in two more languages. His mother taught him Italian, and Paul first studied French at school, and then the actor improved the language while working as a model in Paris. Paul also knows Cockney, a dialect spoken by working-class Londoners, which is quite difficult to understand even among English-speaking people.

In addition to his acting career, Adrian does charity work. The actor founded the PEACE foundation to help children and combat social injustice.

Although the success of Highlander: The Series could not be repeated, Adrian regularly appears in movies. In 2018, four projects with the participation of the actor were released. Paul is also involved in producing, for which he founded Filmblips Inc. in 2008.

Adrian still keeps fit. The actor is 6 ft. (183 cm) tall, weighing 205,03lbs. (93 kg), and he has mainly gained muscle weight. Regular workouts, a healthy diet, and the absence of bad habits help the celebrity keep himself in good shape.

Paul is no stranger to modern technology and has pages on Instagram, Twitter, and Facebook. On Instagram, Adrian posts photos of the shooting as well as pictures of his personal life. People can easily find photos of his wife and children on his account.