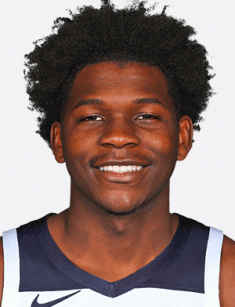 Anthony DeVante Edwards who was born on August 5, 2001 is an American professional basketball player. Also known by his nickname Ant-Man, he is currently a shooting guard for the Minnesota Timberwolves of the National Basketball Association.

The rising star was born and raised in Atlanta, Georgia. His parents' names are Roger and Yvette. When Anthony was in middle school, his mother and grandmother passed away from cancer within one year. He was very close to both of them and took this loss very hard. Anthony also has two older siblings. They raised him after his mother's passing. His sister's name is Antoinette and his brother's name is Antoine. The Minnesota Timberwolves star reportedly has no ongoing relationship with his father.

As a child, Anthony was very passionate about football and played for a youth football team. He eventually decided to switch to basketball and began training under former Liberty Flames basketball player Justin Holland. After briefly playing basketball for Therrell High, he transferred to Holy Spirit Preparatory School. He quickly became one of the top basketball prospects in the country and received offers from colleges in Florida, Georgia, Kentucky and North Carolina. In February 2019, he decided to accept the offer from Georgia and joined the Georgia Bulldogs team.

In the 2020 NBA draft, Edwards was selected by the Minnesota Timberwolves. He signed a 4-year contract with the team. In March 2021, Anthony set a record as the third-youngest basketballer to score over 40 points in the game against the Phoenix Suns. He is currently averaging 19.3 points, 4.7 rebounds and 2.9 assists per game. In the 2022-23 season, Edwards will earn over 10 million dollars.

The player is in a relationship with a woman named Jeanine Robel. He prefers to keep his love life private, so there is no further information available about their love story.

He is wearing a number 5 jersey as a tribute to his mother and grandmother.

The basketball star has a bulldog nicknamed Ant Jr.

In 2022, he made his debut as an actor in Jeremiah Zagar's drama movie "Hustle", where his co-star was Adam Sandler.

The player wants to inspire kids to pursue a career in basketball, so in August 2022 he held a one-day basketball camp in Atlanta, Georgia, for children aged 8-14.

In September of 2022, Edwards has been fined 40,000 dollars for posting a questionable video with homophobic language on his Instagram page. Following the incident, he issued an apology on his Twitter page.

Anthony Edwards has a record of 67-88 in his career.