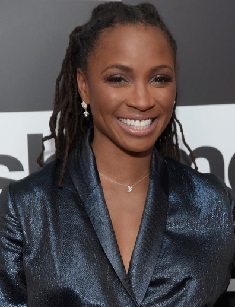 Born in Charleston, Shanola Hampton is a successful movie and TV series actress. She started her career in 2000. The same year she married. Shanola is best known as the face of Veronica Fisher on the comedy-drama series Shameless. Shanola is also a happy mother and a die-hard Minnesota Vikings fan. Her net worth is roughly estimated at $1 million, including all of her properties and earnings.

Shanola is from small-town Summerville, located in South Carolina. She was born in Long Island on May 27, 1977, but she was only there until four. Shanola’s father was a pastor, so she sang in the church choir. However, she decided to be an actress at the age of four. Her mother was instrumental in taking Shanola to audition for local plays.

Shanola spent much time acting in Charleston’s street theater. There was a program called Wings that a girl did through high school. Later she graduated majoring in Theatre from Winthrop University, in which Shanola earned a Bachelor’s degree. Later, she earned a Master’s degree at the University of Illinois.

Shanola moved to Los Angeles in 2001 and began appearing in commercials. Later, she made her first guest appearance in Ryan Murphy's Popular. During 2001 – 2010, the novice actress played some small roles on TV series, also she filmed in short movies. Her first big project came in 2010 when Shanola played Dr. Graceffa in Miami Medical.

Before the fame, she was forced to work as a bartender for ten years. Landed the role of Veronica in the pilot for Shameless in 2011, Shanola decided to quit when the series got picked up, and episode two was filming. Currently, she earns $35,000 per episode of Shameless.

In 2012, Shanola appeared in one episode of Criminal Minds. Two years later, after her first appearance as Veronica on big screens, her role as Kalindra Stepney in the movie Things Never Said made a remarkable impact on the audience. On American Black Film Festival, Shanola was awarded as the best actor. In 2018, she appeared on the TV show of Steve Harvey.

Although Shanola is acting on a great show with great writing and playing a great character, according to her words, her ideal job is to be Monica Rambeau. She said that she was born to be a superhero, and she would do her own stunts. Shanola is working out daily to be that superhero. Look up, Monica Rambeau. She’s Shanola.

Being a successful actress, Shanola is also a good mother and a caring wife. She tied the knot with Daren Dukes in 2000. Her husband also belongs to the same profession as her as he is a writer and an actor. They are a family of four: Shanola, Daren and their two children, five years old daughter, and three years old son.

Hampton was the face model for one of the four main characters on Left 4 Dead 2, which is a video game that emphasizes co-op play as human survivors blast a path to their continuing survival through zombie hordes in a post-apocalyptic world. Hampton’s character is named Rochelle, who has been described as a production assistant reporting on events for a local TV station when the events of the game started happening.

Apart from acting on televisions and films, Shanola has an ultimate goal to open a Performing Arts school. She is also professionally trained in fencing and hand to hand combat. She looks very good for her age, regardless of whether she has no makeup or is.