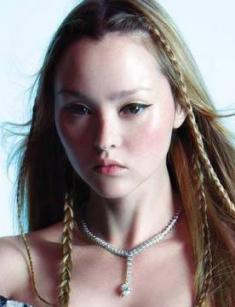 Devon Aoki is a successful model and talented actress known for the role of the mute killer Miho in Frank Miller’s action Sin City. The aggregator Models.com calls the woman one of the fashion icons today; she is the shortest supermodel in the world.

Devon Edwenna Aoki was born on August 10, 1982, in New York. The girl lived in luxury since early childhood thanks to her father’s business: the former wrestler Rocky Aoki opened the first sushi restaurant in New York. Today, the Benihana franchise is present in the United States, Canada, Great Britain, North and South America. The mother, Pamela Hilburger, worked as a jewelry designer. The parents had Japanese, German, and British roots.

Rocky was married three times; Pamela became the third wife. They had seven kids together, including Devon and her half-brother Steve.

Devon Aoki entered the fashion industry at 13. The mixture origin gave the young woman her unique beauty, and Kate Moss noticed her. Two years later, in 1997, Devon received her first invitations from Chanel, Balenciaga, and Comme des Garçons. In 1998, the 16-year-old model was chosen as the spokesperson for Versace, replacing Naomi Campbell.

In the early 2000s, Aoki walked off the world of fashion and began to act. In 2017, the woman returned to modeling for the Sephora x Moschino campaign; she continues to collaborate with many companies today.

In 2017, the fashion observer of Dazed Dominic Cadogan named Devon Aoki the iconic model and one of the most recognizable figures of the 1990s. He emphasized that leading photographers dreamed of having a photoshoot with the 16-year-old beauty for their portfolios.

In April 2019, Marie Claire magazine included Devon Aoki into the list of 15 supermodels who changed the industry. The woman’s “defect” was eye-catching: she was only 5.51 feet (168 cm.) high while models were expected to be at least 5.68 feet (173 cm.). Devon is proud of her difference from colleagues and does not hesitate to shoot in a swimsuit (or, sometimes, without it), just like the rest of models. Aoki’s weight is 105.82 lbs. (48 kg.).

Devon Aoki debuted in the 2003 movie 2 Fast 2 Furious. When she received the role of the street race driver Suki, it turned out the actress could not drive. She had to learn how to do it quickly under professional stunts’ guidance.

The role of Miho in the iconic action Sin City (2005) by Frank Miller, Robert Rodriguez, and Quentin Tarantino brought the artist real fame. Although she did not utter a single word there, her charming, expressive face was speaking for itself. War (2007), Mutant Chronicles (2008), and Rosencrantz and Guildenstern Are Undead (2009) followed; none of the projects was successful on the big screen.

Devon was to play Tatsu Yamashiro in the third season of the series Arrow, but she had to reject the role: her schedule was too busy. The Japanese model Rila Fukushima took the part instead of her.

Unlike the majority of celebrities, Devon Aoki does not keep the lid on her personal life. She announced her engagement to James Bailey, the founder of Velos Partners, in 2010. Their first child, the son James Hunter, was born out of wedlock on June 10, 2011.

According to open sources, the spouses broke up at the beginning of September 2019.

Nowadays, Devon Aoki has come back to modeling; she shot for Harper’s Bazaar in August 2019. The celebrity is the spokesperson for Lancome and collaborates with the Women modeling agency.