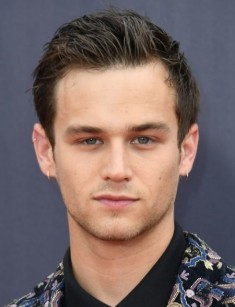 This handsome young actor has become popular after the role of Justin Foley in the series 13 Reasons Why. This crime drama about the mysterious events at the American school gained great popularity in 2017. Having become well-known, the young man has attracted the public attention to his personality and has made a coming out and announces his nonconventional orientation and joining to the LGBT movement.

Brandon was born on the 11th of October, 1993 in Miami, in the State of Florida of the USA. The actor’s father is Michael Flynn (nothing is known about his occupation). His mother Debbie Flynn is a bank employee. The boy was growing up with his two sisters – Danielle and Jaime with whom he has friendly relations at present.

Brandon had his first acting experience when he was studying at the elementary school. Here it was a tradition to stage the children performance each year.

"When I was a pupil of the 5th form, and we were preparing Peter Pan performance I thought: "Oh my God, I don't want to take part in this!", - Flynn remembers with laughter.

As a result, the boy was inspired by his schoolmate who was his friend and received the role of Mr.Smee and performed it brilliantly:

"I had a low height (at present the actor is 180 cm high), I was wearing big glasses and the hat of Santa Claus. I began to have hiccups because I was nervous. I was running as a madman and as a result, I spoiled the last scene".

All the situation resulted in the fact that his teacher called Mr. Flynn and advised to send her son to the acting courses at high school.

"Brandon has no idea how to act, but he can make the show!", - his teacher told.

Brandon refused to be engaged in the dramatic arts, but his father persuaded him to attend the classes at least for a year. Everybody knows what has turned out of this: the young man started to make his first steps in his creative career. Flynn has fallen in love with the acting. He spent a year in London, studying the dramatic arts.

Here he has got fancy for Shakespeare. Also, he has worked on the stage of the famous Globe Theatre. Then he returned to the USA where he has entered one of the prestigious acting schools in Miami. The actor has graduated from Mason Gross School of the Arts at Rutgers University (New Jersey) and has received the bachelor's degree in Fine Arts.

Since the age of fifteen, Brandon began to visit the auditions and different castings. He took part in the advertising, in the crowd scenes. At the same time, he was patiently waiting and believing that once his lucky time would come. In 2016 Brandon was approved for the shootings in the fantastic series BrainDead of CBS TV channel. This project turned out to have a low rate and was closed after the first season.

Right after this series, Flynn performed the cameo role in the short-length movie under the title Home Movies. In this movie, he was kissing in the shot with the actor Miles Heizer. Then for some time, he performed at the stages of non-profit Manhattan theaters: he had scenic experience in the following performances Much Ado About Nothing, Kid Victory, The Crucible and in many other plays.

However, all this was an introduction to the real success, exactly to the role in the series 13 Reasons Why shot by the novel written by Jay Asher.

The series was released in the spring of 2017. The plot of this soap opera is very intriguing: the senior school girl Hannah Baker committed a suicide (performed by the actress Katherine Langford). After her death, there were found thirteen audio tapes on which the girl had told about the reasons for the suicide. While listening to these records, it became obvious that each of the schoolmates was connected with some secret and was implicitly guilty of Hannah's death.

Brandon Flynn has played the major role of Justin Foley, the captain of the basketball team, the guy with the unfortunate past which had influenced his behavior and character.

The actor has deeply and precisely expressed the sincere experiences of the guy who had offended Hannah in the past, and later couldn’t protect his girlfriend Jessica (performed by the actress Alisha Boe).

"This story is very personal for me in a way, - the actor has confessed to the journalists. – Complexity, secrets, mental pain – all these emotions are familiar to me: some of my friends died having committed suicide … I feel natural in this show and this role …".

With his acting in the series 13 Reasons Why Brandon wanted to contribute to the increasing attention to the suicide problem. On his wrist, he has a tattoo of "semicolon." It means the refusal to commit suicide. Alisha Boe, Tommy Dorfman, and Selena Gomez also have the same tattoos.

The actor adheres to the similar active and open position in his private life as well. For example, Flynn has never kept his homosexual orientation in secret, and at the age of fourteen, he had enough courage to confess to his parents.

In September 2017 the actor has made coming out. It means that he has officially announced that he is a member of the LGBT community, and he has openly joined the movement under the colorful flags. He has confessed in this nonconventional orientation in his post on Instagram and has coincided it with the discussion of the same-sex marriages legalization in Australia.

At the same time, in September of 2017, Flynn started meeting the singer Sam Smith. The couple broke up in June of 2018.

Flynn has lived in Los Angeles for many years. Today he is a young demanded actor who has a very busy working schedule. The high rates of the project 13 Reasons Why have inspired the creators from the Netflix company to continue the shootings. The second season finished in 2018. And at present period the team of the actors including Brandon, work on the third part of the project which premiere is set for 2019.

Moreover, Flynn enriched his filmography with the role in one more series. At the beginning of 2018, the actor began to shoot in the 3rd season of the well-known series True Detective. In this series, Brandon together with Michael Graziadei will play the roles of the detectives Ryan Peters and Dan O'Brien.

Brandon confesses that social networks play an important role in his life. The actor has Twitter and Instagram pages.

"Social networks let us keep in touch with each other, see the photos of our friends and beloved. For example, with the help of Instagram, I keep in touch with those who love me and whom I love. I admit that sometimes I switch off the phone and enjoy reading a good book. I call it digitized detoxication, and it works", - Flynn shares his thoughts. 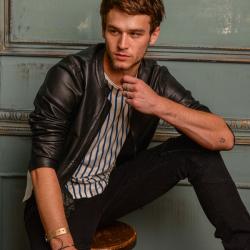