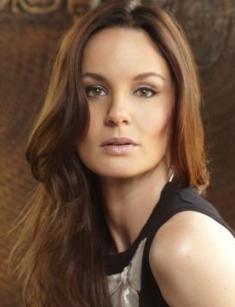 Sarah Wayne Callies is an American actress who appeared in many full-length movies, but her series roles brought her recognition: the artist personified Sara Tancredi in Prison Break and Lori Grimes in The Walking Dead.

The would-be celebrity was born on June 1, 1977, in La Grange, Illinois. When the girl turned two, the family moved to Honolulu; she spent her childhood in Hawaii. The father, David E. Callies, was a Law Professor at the University of Hawaii, Manoa; the mother, Valerie, was an English Professor there.

The parents wanted their daughter to have a good education and took her to the prestigious Punahou School. After graduation, the young woman enrolled at Dartmouth College in Hanover, New Hampshire and, later, the National Theatre Conservatory where she became a Master of Arts.

Sarah debuted in an episode of Queens Supreme in 2003. The same year, she worked on the series Law & Order: Special Victims Unit and Dragnet and had a voice role in the animated movie Tarzan.

The career started flourishing later. The role in the series Prison Break (2005-2009) brought much popularity. When Sarah learned that her character had the same name, she asked the producers to change it, but they rejected the request without explaining why. Sara Tancredi is a prison doctor and the Governor’s daughter. She appears in most episodes, and the artist had many opportunities to show her talent. Critics, producers, and directors saw her from a different angle.

In 2009, the woman also personified Tancredi in the TV movie Prison Break: The Final Break closely related to the series plot.

Simultaneously, Sarah worked on the detective series Numb3rs about the Los Angeles FBI; as the story runs, the main character and his brother, a mathematician, solve crimes by sophisticated formulas.

In 2006, Sarah Wayne Callies appeared in the full-length project The Celestine Prophecy. The next year brought the crime thriller Whisper starring Josh Holloway. It is the story about a kidnapped boy from a rich family. However, he is not an ordinary child: he turns out to be a demon.

In 2010, the actress gained one of the lead parts in the series The Walking Dead that pictured the life during a zombie apocalypse. The group of survivors has to fight against contagious and flesh-eating monsters. Sarah personified Lori Grimes for three seasons; this character tragically died at the end of the third one, and Callies left the show.

Apart from that, 2010 was marked the popular series House where Sarah played a secondary character and the full-length movie Lullaby for Pi.

In 2011, the actress played Francine, the main character’s (Milla Jovovich) friend in the drama horror Faces in the Crowd. As the story runs, the injured victim of a serial maniac cannot remember the criminal’s face, as well as the faces of close people. The movie creators employed several actors to portray the same characters so that the audience would see the protagonist’s world. Kirsten Robek also played Francine. Valentina Vargas, Medina Hahn, and Sandrine Holt personified another friend, Nina.

In 2014, Sarah played the lead part in the thriller Into the Storm. When a tornado happens, a group of extreme lovers rushes to the middle of the catastrophe to take a picture that will become famous. The next year, Callies participated in the thriller Pay the Ghost based on the popular legend that the door to the other realm is opened at Halloween. When some evil spirit kidnaps a boy, his father (Nicolas Cage) is going to save his son and heads to the other realm.

In 2002, Sarah Wayne Callies married Josh Winterhalt; they had met when the artist was a Dartmouth College student. In 2007, their daughter Keala was born. In 2013, the family welcomed the son Oakes.

The actress likes to spend time with her family and cook for her husband in her spare time.

In 2016, Sarah Wayne Callies played the lead role in the British-Indian horror The Other Side of the Door. The movie is based on the Indian mythology: one can see Indians from the Aguri caste; the divine gatekeeper Mitra who protects the border between the world of the dead and the world of the living; the soul reincarnation theme; Indian traditions and rituals.

The actress’s character moves to India with her family. The movie begins at the moment when Maria and her children have a car crash; the woman saves her daughter but fails to reach her son, who dies in the sinking vehicle. Depressed, Maria decides to do the Indian ritual to talk to her boy and ask him to forgive her.

The things do not go as they should have: the woman breaks a rule and brings the son’s soul back, to the world of the living. Little by little, Maria and her family understand that the spirit that came back is not the cute boy: it is the powerful and cruel monster, and the god of death is following him; anyone who will prevent him from taking the soul back will be killed.

Besides, 2016 gave Callies the lead role in the sci-fi postapocalyptic series Colony. The story is set in the future where humanity is suppressed by an alien force. People live in closed zones that used to be cities. Families were separated during this new order; everybody has to survive and comply with the curfew because of the permanent threat from the invaders.

Sarah’s character is a member of the resistance. She also meets her husband secretly; they try to find their lost son.

In April 2017, Callies came back to the role of Sara Tancredi in the fifth season of Prison Break that came out eight years later after the fourth one. The lead actors, Wentworth Miller and Dominic Purcell, also played the familiar characters: Michael Scofield and Lincoln Burrows.