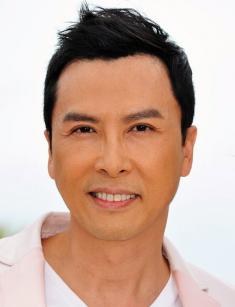 Donnie Yen Ji-dan, better known as Donnie Yen, is a famous Chinese actor, the star of such films as Shanghai Knights, The Monkey King, Ip Man, and Rogue One: A Star Wars Story. Moreover, Donnie Yen has worked as a director and musician. He has also proved himself to be a talented producer and stunt coordinator.

The future actor, Donnie Yen, was born in the Chinese city of Guangzhou, also known as Canton. Two years later, the whole family moved to Hong Kong, where Donnie's mother, Bow-sim Mark, was going to open her own martial arts school. But she could not do it due to the local mafia, and Yen’s family moved to another country. They settled in the suburbs of the American city of Boston. There, the dream of Donnie Yen's parents came true. The mother started her own club, the Chinese Wushu Research Institute, and his father became the editor of Sing Tao, a Chinese daily paper in Boston.

At the time the boy was 11 years old, and he became one of his mother's most diligent students. Yen and students liked to watch films about martial arts, especially with his compatriots, the unrivaled master Bruce Lee and young Jackie Chan. Such watch parties developed motivation for the classes. Donnie found unusual techniques in films and practiced new exercises during the training. The passion for wushu, which the Europeans call Kung Fu for some reason, led Yen to the famous Combat Zone, where illegal mixed martial arts competitions were held.

The atmosphere of nightclubs and gang fights attracted the young man, so his mother sent him to China. In Beijing, he improved his wushu performance. He enrolled in one of the best martial arts schools where one more actor, Jet Li, had previously trained. But it was not enough for Donnie. He was going to return to the United States when he attended the audition of a new Chinese film by chance. In fact, the casting was over before it began. When the future star demonstrated his abilities, he was immediately approved. So, Drunken Tai Chi became the first film with Donnie Yen in the leading role.

Drunken Tai Chi was a smash hit in Hong Kong. It is interesting that the 19-year-old actor was not going to pursue an acting career. He agreed to act in this film to gain a new experience, but Donnie Yen did not like the work in the movie. Then the young man did not think that he could shoot for a long time. But the success of the film led to a long collaboration with director Yuen Woo-ping, who also discovered Jackie Chan's talent. They created several films, including the action movie Mismatched Couples, Tiger Cage and In the Line of Duty 4. It is worth mentioning that in these films, Yen developed his own style of stage combat and did not use the techniques of his childhood idols.

In the late 1980s, Donnie began working with another director, which was the turning point in his career. The action movie Once Upon a Time in China II made him a real star, at least in Hong Kong. At the same time, Iron Monkey, the Chinese version of the legend of Robin Hood, was released. It distinguished itself with the scene of the battle with the Shaolin monks. This episode was ranked by critics and viewers as the best battle scene over the last decades. Later, the actor became a television star, playing leading roles in two incredibly popular TV series The Kung Fu Master and Fist of Fury. Ip Man, the biographical thriller about the first martial arts teacher, made Donnie world famous.

Yen as Chirrut Îmwe in the movie Rogue One: A Star Wars Story | Cinema

Yen has tried his hand at other spheres. As a director, he has produced about a dozen films, including Legend of the Wolf, as well as Chin Long Chuen Suet and Ballistic Kiss, in which he was also a scriptwriter. In the comedy action movie Wing Chun, Donnie realized his potential as a musician recording a soundtrack.

When Donnie Yen was young, he had a lot of love affairs preferring to date girls of Chinese descent, although the man grew up in America. He had the most famous relationship with Hong Kong actress and photo model Joey Meng. They dated for a long time but broke up at the turn of the XX century.

Three years after separating with Meng, Cissy Wang, a Chinese actress and former beauty queen, became Donnie Yen's wife. Their wedding took place in the Canadian city of Toronto. Now the couple lives in North America and has two children. Donnie Yen and his wife have a son, James, and a daughter, Jasmine.

It is noteworthy that Donnie is a scandalous person. Since he was a teenager, the young man has expressed the uncomplimentary opinion of people. However, Donnie rarely says compliments. As a boy, he criticized actor Chuck Norris, who tried to rank with his favorite masters of martial arts. When the best films of Donnie Yen came to light, it turned out that on the set the actor regularly quarreled with the directors, calling them "mediocre people", "tyrants" and "henpecked husbands",