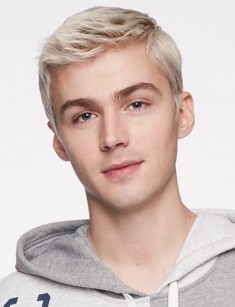 Miles Heizer is a novice American actor. The young man plays in films and television series, and also develops a music career. A wide audience has remembered the actor in the film Nerve and the series 13 Reasons Why. The directors offer the actor profound, complex characters which makes people interested.

Miles Heizer was born on May 16, 1994, in America. His homeland was the town of Greenville in Kentucky. The boy was brought up by his mother and elder sister. There is no information about his father. His mother worked as a nurse and tried to provide children with everything they needed. In 2004, the family moved to Los Angeles in search of a better life. Miles’s creative nature showed off at an early age. He participated in children's plays in his native city. Having moved to the metropolis, he had the opportunity to develop professionally.

The young actor began his career early. The first step was a bit part in the television series CSI: Miami. Miles decided to focus on his goal of becoming an actor, so he was home-educated during high school. He combined the studying with interesting activities. He was soon invited to the next shooting, and the young man starred in the short film Paramedic. The mother and sister supported Miles in his endeavors, so the young actor confidently made decisions that could affect his future.

Miles Heizer’s first work was the role in the episode "Nothing to Lose" of the project CSI: Miami. The boy was 11 years old, and despite the lack of experience, he coped with the director’s task well. It was followed by a small role in the series Ghost Whisperer. Miles appeared in the episode entitled "Drowned Lives." There were no many film proposals, but the young man regularly played bit parts. He managed to appear in the series Shark, Bones, Private Practice, ER. In 2009, he starred in the project Cold Case.

The popularity of the young actor gradually increased. In 2010, he got the title role in the series Parenthood. Miles portrayed one of the sons of the leading character. The man's television career also included roles in films. The first experience was the participation in the film Paramedic in 2006. The movie Rails & Ties was very important for the actor’s professional development. 12-year-old Miles played the role of an orphan adopted by a train driver who knocked down and killed his mother in a car accident.

2008 and 2012 were marked by participation in short films Loon and The Arm. In 2014, he starred in the movie Memoria and Rudderless. Then the film The Stanford Prison Experiment and the short film The Red Thunder were released. The first movie attracted the critics’ interest, as the actor played an unusual character. He portrayed a student who during the experiment was supposed to play the role of a guard who kept watch over other test people.

In 2016 Miles Heizer starred in the film Nerve. The actor got a leading role in the project. He worked in a duet with Emma Roberts. During his young years, Miles’s most important work was the role in the project 13 Reasons Why. The series premiered in the spring of 2017. The plot is based on the novel by writer Jay Asher and tells about his relationship with a girl, Hannah Baker. The heroine committed suicide, leaving videotapes which explain 13 reasons for her decision.

Miles Heizer played the girl’s friend, Alex Standall. She mentioned him in the list of the people who pushed her to death. Miles’s role was supporting, but the attractive appearance and dramatic role attracted viewers’ attention.

At the end of the second season, Alex Standall attempted suicide because he lived under the oppression of guilt about the deceased friend. After a failed suicide attempt, the young man survived, but lost memory, some motility skills and freedom of movement. The hero gradually recovered and began to recall the events that happened before.

In 2018, the comedy-drama Love, Simon premiered in the USA. The role in this project also attracted the attention of critics, because Miles portrayed a friend of a teenager who shared a secret about his orientation. The protagonist’s confession, the attitude of the family and the society became the main theme of the movie.

Miles Heizer belongs to the artists who try to hide their private lives. He has played some provocative roles. Some episodes and scenes made people think that he had romantic relationships with his colleagues. Journalists and fans assumed that Miles might have a love affair with actress Mae Whitman or with actor Brandon Flynn.

The man’s sexual orientation is continuously discussed in the press and on the Internet. Miles does not comment on it in interviews and does not tell his preferences. Paparazzi have never made a personal photo of the actor with a girl or a young man, so this sphere of his life remains under the veil of secrecy.

Miles Heizer is a creative person. He appears in films and on television, and also is fond of music. Miles is keen on the electronic music genre. In his spare time, the young man composes songs and posts them on the Internet.

In 2018 the celebrity’s filmography includes exciting projects that let us hope for his development as a serious dramatic actor. Nowadays Heizer continues to play in films and television series. The young man promotes brand clothes and regularly poses for glossy magazines. His activities and everyday life are covered on Instagram and Twitter personal accounts. 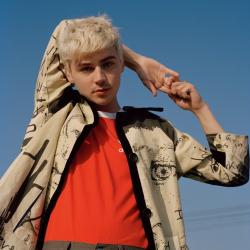