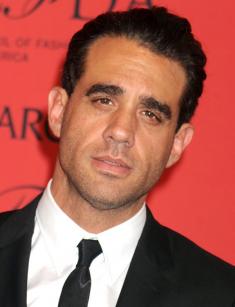 Robert Cannavale, better known as Bobby Cannavale, is an American actor with Italian-Cuban roots, the star of the TV series Third Watch, Will & Grace and Vinyl. The actor has a net worth of $8 million.

Bobby was born in the small town of Union City, New Jersey. But soon after the birth, Robert with his parents, Isabel and Salvatore "Sal" Cannavale, moved to a warmer area in Florida.

When the boy was 13 years old, his parents divorced, and the future actor with his mother went to Puerto Rico, where she was born. However, Bobby spent there only two years of his life. Later he returned home and soon began to make his first steps in an acting career.

Cannavale revealed the desire for acting in junior school. Actually, he got one of the roles in the school play The Music Man accidentally, and then purposefully he participated in the play Guys and Dolls. Having involved in the rehearsals and the final performance of these children's plays, Bobby Cannavale, yet almost a child, had already decided on his future profession.

But he did not study acting, which did not become an obstacle in Bobby's career. Having gone to conquer theaters and film companies, the young man worked as a bartender until he achieved the opportunity to go on stage in non-repertory performances.

For quite a long time Bobby Cannavale could not catch on to some serious role. His first notable work was the criminal series Third Watch, where he starred in the first two seasons. Bobby also attracted the attention to himself with a multi-episode film Will & Grace, primarily since a very straight man portrayed a gay police officer, although Bobby himself has a traditional sexual orientation.

After the release of the movie The Station Agent, he became extremely popular. In the movie, Cannavale played opposite Peter Dinklage, whose height is 4 ft 5 in (135 cm).

In 2012, Bobby Cannavale appeared in the crime drama television series Boardwalk Empire. The plot is based on the story of a major gambling center Atlantic City in the 20s of the XX century, during the Prohibition period. The action of the series begins a couple of hours before the announcement of the new law. Criminals are already planning how they will access the underground sale of alcohol or plunder the supplies of the competitors.

The series received positive reviews and the regular filming of new seasons. Boardwalk Empire lasted for five seasons. The character of Bobby Cannavale appears in the third season. The actor played the role of a ruthless gangster Gyp Rosetti who challenges the protagonist of the series, the city treasurer and criminal boss Nucky (played by Steve Buscemi).

Later Bobby played opposite Al Pacino in the psychological film Danny Collins, Cate Blanchett in the family drama Blue Jasmine, Selena Gomez in the social tape The Fundamentals of Caring. All these movies had high ratings and were in demand among the audience.

In 2015, the actor appeared in the comedy thriller Spy by a director and screenwriter Paul Feig. Critics warmly received the comedy which succinctly noticed the central stereotypes and inconsistencies of the genre and ridiculed them.

The film is a parody of classic spy movies and cult franchises, like James Bond, initially shows a stereotypical superspy in a classic suit, with an attractive appearance, charm and fighting skills. But in the first minutes of the movie, the agent is killed, the spy network is lit up, and the only person able to save the world from a terrorist attack using the latest bomb becomes a staff agent. It is a notorious plum girl Susan (played by Melissa McCarthy) who has been in the "field."

Susan finds a mediator in the sale of bombs named Sergio De Luca, whose role is played by Bobby Cannavale. Sergio helps the heiress of the criminal boss to sell a bomb to terrorists, and in parallel with it also conducts his own game with secret plans for sale and use of a bomb.

When Bobby Cannavale was 24 years old, he married actress Jenny Lumet, the daughter of the famous director Sidney Lumet, who also has a Latin American origin. The actor and his wife had a son Jake, who followed his parents' footsteps. By the way, Bobby played with him in the television series Nurse Jackie, where they portrayed a father and a son.

The marriage with Jenny Lumet lasted nine years, but in 2003 the couple divorced. After that, Cannavale had several romantic relationships with colleagues on set. Annabella Sciorra and Alison Pill were in the list of his girlfriends.

In the spring of 2012, Bobby publicly announced a serious affair with Broadway actress Sutton Foster. But only six months later he began dating a new passion, actress Rose Byrne, the star of the action X-Men: First Class.

According to images from social networks, Bobby Cannavale and Rose Byrne are still together, and in February 2016 they had a son Rocco Robin Cannavale. In his speech at the Emmy Awards ceremony, the actor called the woman the love of his life.

Since the winter of 2016, the actor had been the protagonist of the new television series Vinyl. The series for HBO Channel was filmed in the genre of musical drama and was created under Mick Jagger's control. The plot of Vinyl takes place in the 70-es of XX century. The protagonist, Bobby Cannavale's character named Richie Finestra is the head of the recording studio who is trying to revive his own label American Century.

Only the first season consisting of ten episodes came out on the screen. On February 19, 2016, the channel announced that the series would receive a second season, but HBO Channel later revised this decision and announced that the TV series Vinyl would close on June 22, 2016.

In 2017, Bobby Cannavale joined the cast of the drama series Mr. Robot that has been nominated six times for the Emmy Award. The series tells the story of a talented young cybersecurity engineer (Rami Malek), who works at night in an underground hacker group and dreams of destroying corporations and overthrow leaders who destroy the world.

The third season premiered on October 11, 2017. Bobby Cannavale played the role of Irving, who appeared only in this season, but immediately became a permanent character.

At present, Bobby's net worth is estimated at $8 million.