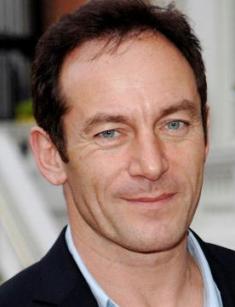 Jason Isaacs is a famous British actor who became known for playing mostly negative characters. The actor gained enormous popularity with the role of Lucius Malfoy in the Harry Potter film series.

Jason Isaacs was born on June 6, 1963, in Liverpool. He is a Jew. Besides Jason, the family brought up four children. The boy's father – Eric Isaacs, was an entrepreneur and a jeweler. Together with his wife Sheila he brought up the younger generation in Jewish traditions. Therefore, the future actor graduated from a Jewish school.

When the boy was eleven years old, the family moved to London. In the British capital, the child was sent to the Haberdashers' Aske's Boys' School, a public school for boys. During his studies, Jason became interested in theater and became involved in the school theater circle.

After school, the father of the young man insisted that he received a law degree. Isaacs Jr. did not argue and went to Bristol University to study law.

He studied and devoted all his spare time to his favorite hobby. In the theater, the guy was lucky and got a lot of parts, and during his studies, he participated in thirty performances. Moreover, three performances were shown at the Edinburgh festival. At the same time, Jason directed several productions.

In 1985, the young man left the University and applied at the London Central School of Speech and Drama. At school, he met Sean Pertwee and Paul Anderson.

Jason Isaac's professional biography began with an insignificant role in the detective series Taggart. The show lasted 21 seasons. At the same time, he was busy playing in Inspector Morse, and the drama comedy series Boon.

In 1989, the actor featured in the comedy film The Tall Guy. He co-starred with Jeff Goldblum and Emma Thompson. It was Jason's first feature film.

Then the artist was accepted into the troupe of the National Theater. In 1993, he appeared on stage in the role of Louis Ironson, the central character of Tony Kushner's production "Angels in America." He kept auditioning for roles on television. In the late 90's he appeared in great motion pictures: The British-American fantasy action-adventure film DragonHeart, the horror film Event Horizon, the action movie Armageddon, and the drama film The End of the Affair.

In 2000, he played a negative character in the film The Patriot. The movie was Heath Ledger's big screen debut, and Mel Gibson was the star on the film's set. After the release of the motion picture, the audience hated the villain character. The character had a prototype, but even critics said that the writers overdid the sadistic tendencies of Colonel William Tavington.

After the release of the Patriot, the role of an anti-hero almost became the actor's hallmark. However, the next part of Chaz Watley in Sweet November, who loved to dress up in women's clothing, revealed the other side of Jason's personality. Then he appeared in the war drama film Black Hawk Down, portraying the CPT Mike Steele.

2002 was a breakthrough year for Isaacs. Jason got the role of the death eater Lucius Malfoy in the acclaimed Harry Potter film series. The audience saw the transformation of the actor for the first time in the second movie of the series. The father of Draco Malfoy (played by Tom Felton), the constant enemy of Harry Potter, appeared in the following film, including the last one.

At the movie set, Jason Isaacs met Alan Rickman, Maggie Smith, and Julie Walters. He watched the future famous actors Daniel Radcliffe, Emma Watson, Rupert Grint grow up. In the movie many of the characters were enemies, but in life, the actors became friends and could not hold back their tears on the last days of shooting.

The filmography of the actor covers an impressive range of genres and characters. At the same time as starring in the Harry Potter movies, he played Captain Hook in fantasy adventure film Peter Pan, released in 2003. The film did not live up to expectations, and at the box office, the film creators collected a little more than they had spent on the shooting. However, Isaacs was shining on the screen and did professional work. Besides, he got into two characters at the same time - the pirate and the father of Wendy.

The actor was also involved in the television series Entourage and played Jason Clarke's brother in the television show Brotherhood. In Rosemary's Baby, Jason appeared before the audience as the devil neighbor of the central character.

The characters of the animated adaptations of comic books, Ra's al Ghul, and Lex Luthor talk with the actor's voice. In 2011, the action movie Abduction was released. Jason played a positive role of the stepfather of Taylor Lautner's character.

In February 2017, the premiere of the psychological thriller A Cure for Wellness, in which Jason played a central role, took place. Gore Verbinski directed the movie. In the same year, the science fiction television series Star Trek: Discovery came out. Isaacs played the role of Captain Gabriel Lorca.

With his future wife, Emma Hewitt, Jason met at the London school. She is a television and theater actress. In 2002, the couple had a daughter Lily. Three years later, the family grew once more, their daughter Ruby was born.

Jason and Emma have not made their relationship official, but have been considered one of the strongest couples of Hollywood for thirty years.

One interesting fact can be seen in the actor's biography. He was ranked sixth in the list of the most sinister actors for the portrayal of several negative characters on the screen. On this list, he was joined by colleagues from the Harry Potter films, Alan Rickman and Gary Oldman.

Jason Isaacs has a net worth of $12 million. Now the actor is one of the most popular actors in Hollywood. Jason is an Instagram user. Through his account, the actor shares his private photos, pictures with colleagues, and backstage sneak-peeks with his fans.

In January 2018, the infamous film featuring the actor, The Death of Stalin, came out. Isaacs played the role of the marshal of the Soviet Union Georgy Zhukov.

Two days before the release of the motion picture the Russian screening certificate was withdrawn. Despite this fact, the film appeared on the screen of the Moscow cinema Pioneer.