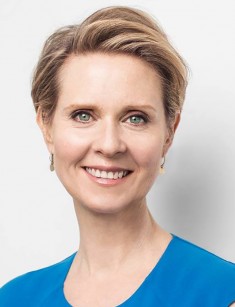 Cynthia Nixon has been an actress from childhood; however, she became globally famous only at the beginning of the century. The role of a feminist and a talented lawyer Miranda in the iconic series Sex and the City brought her fame.

Cynthia was born in New York into an artistic family. Her mother, Anne Knoll, was a theater and movie actress, and the father, Walter Nixon, devoted his life to radio journalism. The girl prepared to become an actress from the early childhood: little Cynthia joined drama clubs and acting studios. When the parents divorced, the mother paid even more attention to her daughter’s development.

The mother was an outstanding person and reacted on all life ordeals calmly, with a smile. When she told Cynthia about her oncology, she presented it like something ordinary. Annу Knoll managed to defeat cancer twice. The daughter took the light attitude toward the world from her mother.

At 12, Cynthia appeared in front of the audience for the first time: she got a role in the play where her mother participated. Later, the beginning actress started playing various characters in Broadway musicals. She conquered the audience and critics; by 18, Cynthia was called the Broadway miracle.

The teenager successfully combined acting and drama clubs with school studies. The young woman entered the Barnard College from the first attempt and graduated as a Bachelor of Arts.

Nixon remained loyal to the theater; she had many roles and even founded the troupe “Drama Dept.” that united Sarah Jessica Parker, Dylan Baker, John Cameron Mitchell, and Billy Crudup.

Little Darlings became the movie debut of the 14-year-old actress. Directors were showering Cynthia with new offers; in 1981, she appeared in three projects. The thriller Prince of the City brought the first fame.

In the 1980s, the artist worked on Amadeus, Rascals and Robbers: The Secret Adventures of Tom Sawyer and Huck Finn, Manhattan Project, and a dozen other movies. The next decade was no less rich in exciting projects. In 1993, Nixon joined the cast of the movie Addams Family Values directed by Barry Sonnenfeld. Although the young woman’s role was minor, she viewed that as a fortune.

In Marvin’s Room, Cynthia played the retirement home director. She had the chance to collaborate with Julia Roberts and Denzel Washington in The Pelican Brief. In a while, the star appeared in the comedy The Out-of-Towners with Steve Martin and Goldie Hawn.

The new millennium was marked with many significant works. In the 2005 movie Warm Springs, the actress played Eleanor Roosevelt; in 2007, she starred in David Ross’s drama The Babysitters.

The 2012 movie Girl Most Likely tells the story of a young American writer who undergoes through a painful break-up; in this project, Nixon played herself.

In 2016, the actress was offered the role in the biographical movie A Quiet Passion. Nixon personified the shut-in poet Emily Dickinson whose talent was recognized only after her death. Jennifer Ehle, Duncan Duff, and Emma Bell starred in the movie as well.

The actress became a TV success and appeared in numerous series. The Big C brought Nixon the love of the audience; Cynthia also appeared in a House episode as a guest star. The role in the series Law & Order brought her the first Emmy Award.

Miranda Hobbes remains the brightest character played by the actress; she is a feminist and one of the four friends in the series Sex and the City. Nixon worked on the iconic movie for six years, got crowds of fans all over the globe, and received multiple movie prizes including the second Emmy Award.

The series could have been created without the actress. Cynthia’s old friend Sarah Jessica Parker who got the lead role brought Nixon to the auditions. It took Cynthia only a short monolog to be granted her role. The actress played a cynical lawyer Miranda who tried to understand what a woman’s happiness meant and learn the art of communication with men.

After the series, the acting quartet (Nixon, Parker, Kristin Davis, and Kim Cattrall) met again when two full-length sequel movies Sex and the City were shot.

Cynthia Nixon believes the success of the project is explained by the variety of female characters. According to the actress, the series showed the women with different life choices. It was the best picture of feminism: a woman had the right to work or not to work, to marry or not to marry; it was all about her personal decision.

Cynthia lived with an English philologist Danny Mozes in civil marriage for 15 years. The couple had two children: the daughter Samantha and the son Charles. In 2003, Cynthia and Danny broke up.

The next year, fans were surprised by the news: the actress was dating an activist and a member of an education movement Christine Marinoni.

Rumors have it the women met during a protest organized by parents who stood against the school maintenance budget decrease: Cynthia and Christine ended up at the same police station. The couple lived together five years before they announced they were seeing each other.

In 2012, the lovers married officially; by that time, they had a one-year-old son, Max Nixon-Marinoni; Cynthia had an IVF procedure.

Cynthia Nixon overcame the terrible disease: breast cancer. After that, the actress joined the activist movement that helps women with oncology. In this respect, Cynthia created a documentary program series broadcast by NBC TV channel.

The woman continues to work on movies. In 2017, she appeared in three projects: for example, she collaborated with Callum Turner, Pierce Brosnan, and Jeff Bridges in the movie The Only Living Boy in New York.

In winter 2018, the short movie series #ThatsHarrassment came out in America. The project shows the examples of sexual harassment at work; all plots are based on true stories.

Nixon not only develops her acting career but also pays attention to politics. In March, she announced on her Twitter and Instagram she was ready to become a candidate for the position of the New York governor; her friends Kristin Davis and Sarah Jessica Parker supported her. 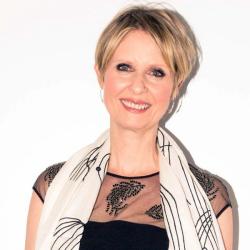