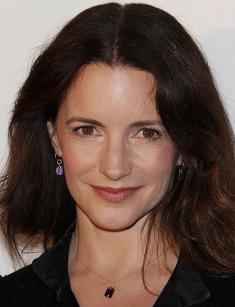 Millions of women around the world checked their lives with the heroines of the series Sex and the City. Each of the four bosom friends got an army of fans. Lovers of family traditions adored Charlotte and along with the actress who played this role – Kristin Davis.

Kristin Lee Davis is the only child of her parents. The actress was born in the district center of Boulder, Colorado, in February 1965. After the divorce of her parents, the girl remained with her mother, who soon married the professor of psychology Keith Davis. Kristin had three stepsisters in the new family.

The girl abused alcohol in adolescence, which is not afraid to admit. Her parents were liberal, struggled with bourgeois nonsense and Davis chose this method of protest.

But at the age of 22, Kristin realized that it would not lead to anything good and she had to choose – either alcoholism or acting because Davis knew that she would have a creative biography from the age of 10. Now she prefers coffee.

Until 1983, Davis lived in South Carolina until she graduated from high school. Then she moved to New Jersey, where she attended Rutgers University. After receiving a Bachelor of Fine Arts degree, Kristin moved to New York, where she participated in classical and modern theater productions, starred in advertising.

The first roles of the actress Davis were hardly noticeable in the movie. The image of Brooke Armstrong in a high-profile TV series Melrose Place was the luck in 1995. However, Kristin stayed in the picture for less than a year. According to one version, her heroine was removed because of unsatisfactory ratings. According to another version, there was the love for alcohol that was to blame. The actress allegedly appeared on the set in a light but intoxicated and Brooke on the screen turned out to be a loose bitch that caused the anger of the audience.

The name of the actress appeared in a caption of the drama The Ultimate Lie, in the popular medical series Emergency Room, in the comedy soap opera Seinfeld. Kristin had one of the main roles in the thriller Atomic Train; about the freight train carrying waste, in which people suddenly found a nuclear warhead.

Davis also played in Robert Rodriguez's fantasy thriller The Adventures of Sharkboy and Lavagirl in 3-D, adapted for a children's audience. Kristin acted as the wife of one of the main characters performed by Matthew Broderick in the family comedy Deck the Halls.

At least a dozen Hollywood stars, from Jean-Claude Van Damme to Julia Roberts lit up in the episodes of the cult series Friends. Davis had a small role of Erin, the girlfriend of Joey, in the seventh season. In the story, Rachel (Jennifer Aniston) and Phoebe (Lisa Kudrow) conclude that Erin is like no other suitable close friend Joey (Matthew LeBlanc). But romantic plans will not come true, Erin herself breaks the relationship, although everything talked about the fact that Joe felt really deep feelings.

But the main pearl in the actress's filmography is considered the film Sex and the City. The writer of the film, who worked on Melrose Place, invited Kristin without casting. According to unconfirmed information, the actress was initially intended to play the role of a bold and frank Carrie Bradshaw, but Davis was afraid to shock her parents and chose Charlotte, who was more calm, striving for family comfort.

It is known that the film collected many awards, got into various tops with the definition of "best." Davis received an Emmy nomination, American Comedy Awards and Golden Globe. Together with her cinematic friends, she won the prize of Screen Actors Guild Award of the United States for the best actor's ensemble. The actress participated in a full-fledged film, based on the series and in its sequel Sex and the City 2, which received the "Golden Raspberry" as the worst film.

Unlike the movie heroines, Kristin is in no hurry to tie the knot. The attractive brunette likes tall brown-eyed men. She likes those boys who are smart, thinking and with a sense of humor, respecting the creative ambitions of the partner. Loving yoga will be ideal.

The actress believes that to be with someone in a relationship is not a criterion of the fullness of life but everybody would envy the list of her romantic affairs. Davis was credited with having a relationship with Chris Noth, on-screen lover of Sarah Jessica Parker, Liev Schreiber, David Duchovny, and Steve Martin, who was 19 years older than Kristin.

Davis had the most serious affairs with the photographer Russell James and Alec Baldwin when he first divorced Kim Basinger. But if in the first case, the man could not keep Kristin close, according to rumors, Alec used a new friend to cause jealousy of his ex-wife. The unsuccessful ladies ' man got back his gifts and was put out of the house.

In 2003, Davis almost married Damien Lewis, the performer of the role of Soames in The Forsyte Saga. However, the marriage was upset because the Hollywood celebrity refused to move to her husband's home in the UK. Lewis felt that she had fluctuations because Kristin is not too in love and dreams of family happiness collapsed.

The actress said once in an interview that she was ready for motherhood and considered adoption as one of the ways to realize the dream. In 2011, Davis supported the words with the action: she adopted a black girl and called her Gemma Rose Davis.

Kristin Davis is an animal protector. The actress patronizes The David Sheldrick Wildlife Trust; it is indicated on "Instagram." Judging by the photo on her account, she has special feelings for elephants. Kristin won the prize of the Human Society`s Wyler Award for her reverent attitude and assistance to the disadvantaged animals, those celebrities are awarded, who committed to humane actions in favor of the environment.

Besides, Davis works with the United Nations High Commissioner for Refugees. The actress has been cooperating with this organization since 2014.

In his free time, Kristin prepares delicious pastries, doing yoga or hiking. In 2004, the actress became the face of the cosmetics company Maybelline.

In early March 2018, the American star made a story of her success at the annual social event in New York "A+E Networks Upfront," on the site of which the presentation of the new project "You" was held.