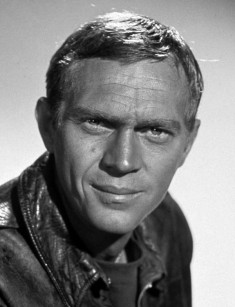 Terence Steven McQueen is a legend of Hollywood cinematography. His characters of ironic and cynical heroes who are permanently struggling against injustice brought him popularity. Most often he appears in the image of "cool" lonely guys who admire the public. Among McQueen’s popular movies it’s worth noting the western The Magnificent Seven, the fighter The Great Escape, the detective story The Thomas Crown Affair and the thriller The Hunter. Moreover, Steven was known as a car-racer and motorcycle- racer. Also, it's worth saying that on the movie set he presented himself as a very disciplined person what, unfortunately, can't be said about Steven McQueen's real biography.

He was born in1930 in a tiny town Beech Grove, in the suburbs of the capital of Indiana State. His father William McQueen was a pilot, but not a military one. He performed with aerobatic tricks at festivals and fairs. The man left his family when his son hardly turned half a year. Whether because of this or for some other reason, the actor’s mother, Julia Ann began to abuse alcohol and as a result, the grandparents received the rights for the upbringing of the kid. Steve was brought up on the farm in Missouri and loved his great-uncle Claude very much.

The guy returned to his mother at the age of eight years, but that period turned out to be one of the worst in the biography of Steve McQueen. At school, he was diagnosed with "dyslexia," because of the ear infection Steve partially lost his hearing. But the main thing was that he couldn't find the common language with his mother and her new husband. The boy began to run away from the house and for a couple of time was caught with petty thefts. Steve McQueen also had conflicts with other numerous stepfathers. As a result, the teenager joined the street gang and got onto the police watch list.

Further, the guy was brought up in the corrective school for teenagers in Chino Hills. Gradually Steven McQueen began to change his attitude to life and, having finished school at the age of sixteen; he had no more problems with the law. Though, till the end of his life, he stayed a troublemaker and an unfortunate lover to have a good time. It's noteworthy that later the actor more than once visited this correctional institution to show his pupils himself that their life was in their hands. When he completed his studies, he became a seaman and made several sea journeys to the Dominican Republic, and in 1947 he signed up for the military. He was sent to the Marine Corps, and Steve McQueen distinguished himself as a hero: during the training in the Arctic, he saved all his shipmates who were pressed down by the ice floe from the death.

After the demobilization, Steve McQueen began to study at the Engineering Faculty at Carnegie Mellon University. He paid for his studies at the expense of the means which he earned in the army. But here the guy's rebellious character won, and after he was driving on the motorcycle through the corridors of the academic building, he was dropped out of the university. Then Steve decided to study acting skills at Sanford Meisner school and at the same time to take part in motorcycle races which unexpectedly brought rather considerable prizes to the young man. Later McQueen graduated from one of the best dramatic art schools of the world - Lee Strasberg Studio. And, according to eyewitnesses, from more than two thousand candidacies for the course, there were accepted only two: Steve and one more future cinematography legend - Martin Landau.

In the mid-fifties the actor and the racer Steve McQueen had his debut on the TV screen at once in a couple of projects, the most popular of which is considered to be the sports drama Somebody Up There Likes Me. The series in the western style under the title Wanted: Dead or Alive became the first considerable Steve’s work.

The picture was broadcast on the TV for five years, and in this movie McQueen was noticed at first by Frank Sinatra who invited the actor for the role of the sergeant Bill Ringa in the military picture Never So Few and then by the director John Sturges who later involved him in the extremely popular western The Magnificent Seven.

The movies by Steve McQueen usually belonged to the fighter or western genres or the crime drama. He steadily appeared at the audience in the character of the cool guy who easily punished cruel and unfair negative personages. It's worth noting the military movie The War Lover, the fighter The Great Escape, the western Junior Bonner and the catastrophe movie The Towering Inferno.

The actor also took part in the romantic comedies, for example, The Cincinnati Kid and Love with the Proper Stranger. But the thriller Bullitt takes a special place in Steve McQueen's biography. For this movie, Steve was nominated for Academic Awards. Also, it's worth noting the extremely gripping crime movie The Thomas Crown Affair which became the base for the whole direction of the pictures about the robberies from the side of the criminals. The sports drama Le Mans is the only attempt of the racer Steve McQueen to demonstrate his driving skills on the screen.

The latest works of McQueen became the biographic thriller The Hunter who tells about the private detective and the western Tom Horn. It's worth saying that despite his difficult character, almost all star directors dreamed of working with him. Steven Spielberg even wrote the script of the science-fiction picture Close Encounters of the Third Kind. But, the actor, had to refuse because of the necessity to show the tears in the shot what turned out to be a taboo for him.

In his personal life, Steve McQueen was married three times and had many petty love intrigues. For the first time, he got married in 1956 to the actress Neile Adams who gave birth to the daughter Terry Leslie and son Chad. At present, one of the grandsons, Steven R. McQueen, is a very famous actor who takes part in the series The Vampire Diaries.

Steve and Neile lived together for 16 years after what Steve McQueen officially left his spouse to his workmate on the movie The Getaway - Ali McGraw. This woman remained main Steven’s life even after the divorce in 1978. Less than one year before McQueen's death he married for the third time. The American model Barbara Minty became his beloved woman, and later she would write a book about her husband.

Except for the wives in the personal life, Steve McQueen had tens of star love affairs with the actresses and photo models who were popular in the 60-70 years. Due to one of such dates the actor even saved his life. He was invited to the secular party and decided to miss it to meet the beautiful woman. Exactly on this day, the armed gang of Charles Manson appeared at the party with the purpose to kill Steven who was in their "blacklist of celebrities."

The actor was always engaged in the sport, and not only in the races. He mastered the skills of the oriental martial arts and was a close friend of Chuck Norris and Bruce Lee. At the funeral ceremony of the last one McQueen was carrying his coffin. It’s interesting that despite his million fees Steven was considered a rather stingy person. Besides the excellent salary, he demanded from the management of each new movie new things for himself: suits, electric razors, scents. The man sent all these things to Boys Republic, corrective school in which he had studied once.

Approximately in 1978, Steven McQueen noticed that he began to have health problems. Being a heavy smoker, he gave up smoking but as it turned out – it was too late. In 1980 he was diagnosed with the malignant tumor in the chest. The actor fought till the end. When traditional medicine was of no use, he set off to Mexico and got treatment with the help of coffee enemas. However, he didn't get any relief. In the autumn of the same year he was operated on the removal of metastases in the throat, but the next day, on the 7th of November, 1980 the actor died at the age of fifty.

Terence Steven McQueen's body was cremated, and his ashes were dispelled over the Pacific Ocean under his authority. Many movies were shot in memory of Hollywood legend, for example, I Am Steve McQueen, Steve McQueen: Man on the Edge, Steve McQueen: The Man & Le Mans. The singer Sheryl Crow dedicated the song to Steve. This composition entered the album under the title C'mon C'mon. 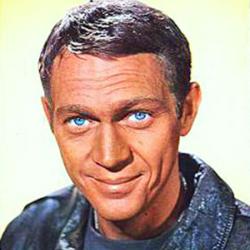