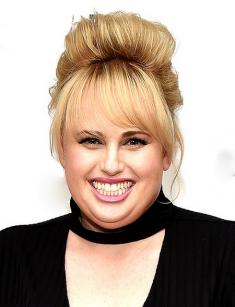 Rebel Wilson is one of the few actresses who came from the distant Australian continent to conquer Hollywood and achieved her goal. And indeed, she is one of those who turned her extra pounds into millions of dollars. Thanks to her non-standard figure with the weight of 236 lbs (107 kg) and the height of 5'3'' (159 cm), charisma that is splashing over the edge and sparkling sense of humor, Wilson quickly found herself in the comedy genre and became a star of numerous movies such as Pitch Perfect, Bachelorette and Bridesmaids. Rebel Wilson has a net worth of $16 million.

Rebel Wilson (Melanie Elizabeth Bownds) was born on March 2, 1980, in Sydney. Later she took her mother's maiden name, and the first name was given to her at birth. Rebel has many siblings. The Bownds family was considered to be large. Rebel has two sisters, Liberty and Annaleise, and a brother, Ryot. Parents earned their bread by breeding Beagle dogs, as well as selling products for pets.

Being plump and clumsy, the girl felt embarrassed about her body and was so timid that her parents were seriously worried about her further social adaptation. Then the mother took her daughter to a children's acting school.

"I was holding on to the car door and crying. She had to peel me off the car. She's like, ‘I'll pick you up in two hours,' And she left me." - Wilson recalled in an interview with Marie Claire magazine.

The transformation of a shy squab into a confident girl happened at the age of 14. Rebel realized that before was too late, it was time to become a personality, and with the help of others.

The future actress attended Tara Anglican School for Girls, and the teacher Mrs. Bowmaker inspired her to participate in a creative competition, which required the skills of debating and improvisation. The actress is still thankful to her mentor in all the interviews:

In 1997, Wilson completed her Higher School Certificate, then joined the Rotary International Youth Exchange Program and went to South Africa. Here in Tanzania, Rebel contracted malaria. She had malaria-induced hallucinations, where she saw herself as an actress who had won an Oscar and went to the stage.

Having come back home, Rebel was firmly sure of the path she would take. She enrolled at the University of New South Wales, where she received Bachelor of Arts (Theatre and Performance Studies) and Bachelor of Laws degrees and began acting at the Australian Theatre for Young People (ATYP).

In the theater Rebel made her first steps in acting. At first, she wanted to become a dramatic actress.

"But then I came on and people just started laughing. I got visibly quite angry that people were laughing at me. And then people would laugh more…I thought, fat is funny, in a weird way. Or even in a scientific way. ... People find it easier to laugh at bigger girls. And I thought, that's going to be my game plan." - recalled the actress.

In 2002, she made her debut as a screenwriter, writing the script for the musical The Westie Monologues, in which she also played. In 2003, she won the ATYP International scholarship, which was funded by Nicole Kidman, her famous compatriot, and went to New York. In the United States, she trained with the renowned comedy theater The Second City, trying herself in the genre of comic sketches.

When Rebel returned to Australia, she began to work actively as an actress, screenwriter, and producer. She played a prominent role of Toula in the series Pizza. Rebel also took part in the popular Australian TV shows as The Wedge and Australian Idol and starred in episodic roles in the movies Fat Pizza (2003) and Ghost Rider (2007).

Since 2008, the actress is the number one star on Australian television. She played in the Comedy musical Bogan Pride, shown by SBS One. A year later Wilson won the Tropfest Best Actress award for her role in the film Bargain. She directed the TV show The Breast Darn Show In Town, was a guest star in the TV series City Homicide and acted in some other TV projects.

Feeling the strength to conquer new heights, 30-year-old Rebel moved to West Hollywood and immediately signed a contract with the William Morris Endeavor agency. The role of Brynn in the movie Bridesmaids was the first she got in Hollywood. The picture was a great commercial success (grossing $288 million) and made the image of Brynn widely known.

Almost immediately Wilson was showered with offers. The young actress complemented the Australian filmography with the film A Few Best Men (2012) and also starred in American films Struck by Lightning (2012), What to Expect When You're Expecting (2012). But most important was the fact that she agreed to star in the movies Bachelorette (2012) and Pitch Perfect (2012), which made her extremely popular.

In Bachelorette Rebel starred opposite Kirsten Dunst, Isla Fisher, and Lizzy Caplan. The plot is based on the story of three on-screen friends who out of envy spoil the life of their school friend Becky (played by Rebel Wilson) on the eve of her wedding.

A musical comedy Pitch Perfect, where Wilson played one of the female vocalists of the group the Barden Bellas, has become so popular that the movie had two sequels, Pitch Perfect 2 (2015) and Pitch Perfect 3 (2017). And Rebel Wilson became the star of all three parts. Moreover, for this role the actress won the MTV Movie Award for Best Actor in a Movie and the Best Musical Moment award.

In between filming Pitch Perfect the actress does not stay without work and acts exclusively with Hollywood stars. So, in 2014, she played the role of a cheerful guard Tilly in Night at the Museum: Secret of the Tomb starring Ben Stiller. In 2016, together with Dakota Johnson, she starred in the romantic comedy How to Be Single, and also appeared in her favorite comedy genre, playing in the movie Grimsby.

In the same year, the information that the actress lost 33 lbs appeared in the media. This fact was proved by a photo from the wedding ceremony of Pitch Perfect's stars, Anna Camp and Skylar Astin, where Fat Amy appeared in a stylish pink dress. She said she was going to lose another 22 lbs.

There is not much information about the Rebel's personal life. The only love she talks about is the love to herself.

"If I just want to go on a holiday, I go on a holiday. If I just feel like going on a hike today or sleeping in today, eat whatever…I'm not very accustomed to compromise." - she said.

After filming the movie Bridesmaids, Rebel became friends with the actor Matt Lucas, who has openly stated his sexual orientation. The friends lived together for three years until 2015 when the actress moved out, having bought a house.

In May 2015, Wilson announced that her boyfriend was a comedy actor Mickey Gooch Jr. The couple's relationship lasted four months.

In 2017, the star admitted on Twitter that she was once subjected to sexual harassment by one of the Hollywood bosses.

In 2019, the actress appeared in the comedy Isn't It Romantic. Today, she is working on the movie The Hustle which will be released in 2019. The Hustle will be a remake of the same film of 1988 with Steve Martin and Michael Caine. In the new female version, the leading roles will be played by Rebel Wilson and Anne Hathaway.

In 2018, the actress received the rights to produce and shoot a film based on the comic book Crowded.

At present, Rebel Wilson has a net worth of $16 million.