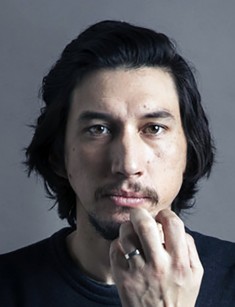 Adam Driver is a well-known American actor. He has received world glory after the release of the new part of the cult saga Star Wars - Star Wars: Episode VII - The Force Awakens where he has performed the character of the main antagonist.

Adam Driver was born in the Californian town of San Diego. The future actor was born in autumn, on the 16th of November, 1983, under the zodiac sign of Scorpion.

The boy’s mother Nancy Needham worked as a lawyer’s assistant, and his father Joe Douglas Driver carried out the duties of the priest of the Baptist church. When Adam was seven years, his parents divorced. Mother together with her son has relocated to the State of Indiana, to her native town of Mishavok where she soon got married to the Christian priest. Here the boy attended the comprehensive school and had received religious education. Moreover, Adam was singing at the local church choir. The boy wasn’t very fond of his studies though he was one of the first at the school theater.

Out of the school walls he was rather an introverted child. He enjoyed wandering alone about the railway tracks and getting on the radio towers. After he had received the school-leaving certificate in 2001, Adam Driver began to work partly as a lawn boy and traveling salesman. But after the terrorist attack on the 11th of September, he decided to become the volunteer in the U.S. Armed Forces and entered the marine corps.

After two years of service, the young man was demobilized because of the thorax injury. Then Adam entered the Indianapolis University but, having studied here during one course, he decided to return to his favorite occupation in childhood and to become an actor.

Driver has set off for New York and has enrolled to the most famous Juilliard Drama School where he has studied till 2009. After the completion of the studies the aspiring actor has concluded the contract with the theatrical agency, and already in a year, he had his debut on Broadway in the play Mrs. Warren's Profession. Later he performed in the plays Angels in America, Man and Boy, Look Back in Anger and The Retributionists.

The actor ceased to appear on the theatrical stage in 2012, but he continued to take part in the noncommercial plays.

Adam Driver had his debut on the screen in the small role of Glen Stetson in the TV movie. You Don't Know Jack. In this movie, there also took part the star of the American cinematography - Al Pacino. The same year Driver performed the role in the cult series Law & Order in the episode "Brilliant Disguise." For the first time, the actor appeared on the big screen in 2011 in the drama J. Edgar directed by Clint Eastwood. A year later the actor performed in the episodes of the comedy Gayby, the black-and-white tragicomedy Frances Ha, the drama Lincoln directed by Steven Spielberg. Moreover, he played the part of Adam in the noncommercial screen adaptation of the poem written by the British poet Stevie Smith - Not Waving But Drowning.

Adam Driver doesn't really like taking part in the TV movies and prefers pictures and live action on the stage. But it was the role of Adam Sackler in the comedy series Girl which has brought first popularity to the actor. The directors have been shooting this sitcom from 2012 to 2017. For this role Driver was four times nominated for the awards including Emmy Awards in 2014.

Next year Adam performed one of the main roles in the Australian drama under the title Tracks.

Moreover, the young man has received episodic roles in the musical tragicomedy Inside Llewyn Davis, the romantic comedy The F Word and the drama Bluebird. In 2014 there were released the melodrama. This Is Where I Leave You and the comedy While We're Young in which Driver has received the secondary roles. And in the Italian drama Hungry Hearts, the actor for the first time has performed the main part and received The Volpi Cup at the Venice Film Festival.

For the present moment, the most remarkable role of the actor is in the sequel to the extremely popular fantastic saga Star Wars: Episode VII - The Force Awakens. Driver has received the central negative role – the new character called Kylo Wren.

Except for Adam, Daisy Ridley and John Boyega took part in the new episode of the cult franchise.

Moreover, Adam Driver has voiced over the character from the series Girls in the animated series Simpsons.

In 2016 there came out three pictures featuring the young actor: Midnight Special, Paterson, and Silence.

The first picture tells about the family in which the father finds out that his son Alton has supernatural abilities. As a result, they have to hide from the religious sects and the agents of the government. Adam received the role of Paul Sevier in this picture.

In the movie, under the title, Paterson Driver received the role of the leading character. The Iranian actress Golshifteh Farahani has become the actor’s partner on the movie set. The video has been premiered at Cannes Film Festival where the picture has been nominated for the first prize - Golden Palm award.

The movie Silence directed by Martin Scorsese was nominated for Academic Awards in 2017. And even though the movie critics have positively accepted the film, it was a failure in the hire. Adam Driver has turned into the character of the Father Francisco Garupe – it's one of the leading roles. Andrew Garfield and Liam Neeson also took part in this picture together with Adam.

In 2005 during the studies at Juilliard Drama School, Adam Driver got acquainted with the aspiring actress Joanne Tucker. The young people have had relations for almost eight years, and in the summer of 2013, they got married.

The spouses have settled in Brooklyn. The couple doesn’t have children. But they "bring up" their pet – a dog (the hybrid of a rottweiler and pit bull terrier) who has the of nickname Moose.

After demobilization from the army, the actor has founded the non-profitable Arts in the Armed Forces (AITAF) organization which is aimed at the social help to the former military personnel. Moreover, together with his former colleague Brian Dorris, Adam has founded the War Theatre in which the old plays are staged. The primary objective of this theater – is to draw as much as possible attention to the problems of the post-war stress among the former soldiers and officers.

In 2012 Adam Driver tried himself as a model and photo model. He has taken part, in the advertising fashion parade of the new Back To Blue fashion clothing line of the American Gap brand. The actor is extremely is against the use of the social networks that’s why he doesn’t have any official pages on them.

However, the fans of the actor successfully cope with this situation. Adam’s fan-page is registered on Instagram. Here the admirers of his creative career post Driver’s photos found on the web.

Quite often on the web, the users have disputes because of the unusual appearance of the actor. The fans admit that Adam breaks the rules of Hollywood beauty standards. Most girls consider that the tall height of the actor and his thick black hair make him extremely handsome. And the pictures of the actor without the shirt in which he demonstrates his athletic body collect thousands of "likes" in the fan microblog. Moreover, his female fans repeatedly noticed that his facial here adds Driver particular charisma. Without the beard, the young man wouldn't look so masculine.

In September of 2017, the spectators saw their favorite actor in the comedy fighter Logan Lucky.

According to the plot, Jimmy Logan after he had been fired from the office decided to prepare the most impudent robbery of all times. In a short time, the guy has put together the team able to run a grift.

Channing Tatum has received the role of Jimmy. Adam Driver got the role of Logan’s brother - Clyde. Daniel Craig, Riley Keough, Katie Holmes, and other movie stars took part in this movie.

In spring of 2018, Adam returned to the role of Kylo Wren in the new episode of the franchise Star Wars - Star Wars: The Last Jedi. Short time before the premiere Adam Driver gave the interview in which he shared that he was trying to mask at the streets, but it's quite difficult because of his bright appearance and high growth (actor’s height is 189 cm, and he weighs 89 kilos).

Then the actor performed the leading role in the movie BlacKkKlansman. This movie tells a story the black police officer who had to hack into the Ku Klux Klan. Together with his workmate of Jewish origin, the man begins the opposition with the dangerous opponent.

In September there is expected the release of the fantasy comedy The Man Who Killed Don Quixote.

In the picture, the spectators will see Adam in the role of the director Toby Grisoni who tries his chances in creating the advertising masterpiece in Spain. Though the whole thing isn't crowned with the success and the young man sets off for the village where he shot his thesis project about Don Quixote ten year ago. There the director finds his hero – the mad cobbler, who is sure that he is the real Don Quixote. The old man thinks that Toby is a squire and he involves the latter in the journey where the reality verges with the fantasy.

Driver would perform one of the leading roles in the movie Untitled Noah Baumbach Project. Scarlett Johansson, Laura Dern, Ray Liotta, and other actors will also appear in this tape.

In 2019 the admirers of the actor will see him in the ninth part of the saga Star Wars. The title of the movie is still kept in secret.

It’s known that Adam will take part in the shootings together with the actress Michelle Williams in the musical under the title Annette. The creators of the movie don’t give information on the details of the production process.

In July of 2018, the director Jim Jarmusch has officially registered about the beginning of the shootings of the film about zombie The Dead Don't Die in New York. The director has invited Adam Driver, Selena Gomez, Bill Murray, Austin Butler, and other well-known actors to take part in the movie. 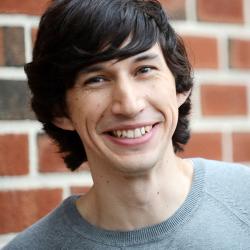