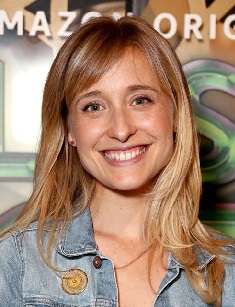 Allison Mack is an American actress, mainly known by her character, Chloe Sullivan from Smallville. It is widely known to the public whom Chloe loves (the answer is obvious — Clark Kent), how she lives and what her principles are. Meanwhile, Mack remained in the shadow for some time, and now the only thing connected with her that comes up to mind is her troubles with the law.

Although Allison Mack is an American, she was born on the 29th of July, 1982 in Preetz, which is located in Schleswig-Holstein, Northern Germany. Her father Jonathan Mack was on tour there with his opera troupe, and her mother Mindy accompanied them. Allison remained in West Germany until the age of 2. The family, including also Allison’s elder brother Shannon, moved to Long Beach, California later. Mack also has a younger sister Robyn.

She started her career as a 4-year-old child, being filmed for an advertisement of German Chocolate. Mack continued with another profession, as a model, but it was a non-serious thing too. She was a little forced to do modeling since her mother believed she was pretty adorable in various outfits. However, at that time the Macks discovered his daughter’s interest in acting and put her at Young Actors Space, a kind of an academy for talented youth. This school is located in Los Angeles and is famous for its alumni, such as Leonardo DiCaprio and Emma Stone.

Mack started her TV appearances at the age of 7 and featured some episodes of Empty Nest, Switched at Birth, Evening Shade and Sweet Justice. No offence intended but these TV shows are little-known, and Allison was too young to aim higher.

Her first significant role was in the series 7th Heaven, and that was it. Mack was noticed primarily due to her dramatic talent since she was playing a teenager who made a suicide bid.

She portrayed another problematic child in the movie My Horrible Year, which told the story of a girl trying to sort out her life before turning 16 (this character also considered death to be a solution).

Mack gained enormous popularity after playing Chloe Sullivan on Smallville. This TV series initially came out on The WB, which was later fused with CBS into the CW that we know today. Smallville told a story of Superman’s maturation as Clark Kent in a small town where his meteorite landed. Clark rapidly became prominent in his school and drew everyone’s attention by saving lives; however, his adoptive parents tried to hide the truth.

Smallville holds some records: it the first show on TV based on the comic books and the second longest-running sci-fi show (eventually Superman lost to Winchester brothers from Supernatural).

Mack starred in all ten seasons bowing out only to Tom Welling, who played the leading character. It is quite interesting that Chloe as created especially for the series and only later appeared in the comic books. There were a lot of rumors around the fact that Sullivan might have really been Lois Lane but under another name. In case if someone doesn’t remember, Lane is Kent’ wife-to-be; but the theory wasn’t justified, and in the 6th season actual Lois was introduced.

According to several interviews, Mack considered her role to be exciting and demanding work. Throughout the whole time of series broadcast, Sullivan maintained her key features such as independence, curiosity, a strong sense of justice, and rationality, side by side with unrequited love for Clark Kent.

Allison Mack received multiple nominations for her role including a Saturn Award, Teen Choice Award, and SyFy Genre Award. In 2006 and 2007 she won the Teen Choice Awards as the Best Sidekick in a TV Series.

Chloe Sullivan became so much adored that she deserved her own show, a spin-off series Chloe Chronicles, which were uploaded to the web. She also appeared in young-adult books and finally took her place in the comic books.

Mack worked with Warner Bros a couple of times more and in 2006 lent her voice to the main character’s sister in the animated film Ant Bully. In 2009 she voiced a minor hero in The Batman and featured Power Girl in another superhero movie.

As one might notice, she has always been associated with another character, kind of behind the back in every work.

After Smallville Mack starred in Wilfred, the FX black comedy which praises moral values in every episode, and she portrayed the girl the leading character had feelings for. She also appeared on the FOX in a drama series The Following.

Mack’s career concluded after Smallville was shut down, but even now her estimated net worth is around $2 million.

Although she was regarded as one of the 50 Sexiest Women in the 2005 issue of the magazine Femme Fatales, she still acts as a simple girl living next door. According to her Instagram account, he favors such things as reading, knitting, watching movies and going out with someone she loves. Well, focusing on her beloved, in March 2003, she accepted an engagement ring from Peter. There is no information about this guy, and all we know is that they were together before the vows and their romance lasted for five years. Allison denied any serious intensions towards Peter.

However, in 2009 another man was mentioned in her social media. Presumably, that might have been Chad Krowchuck, an actor that Mack co-starred in the short film Frog. The couple broke up in around 2010.

April 2013 was the time of Mack’s second engagement was with Sam Witwer after a two-year relationship. They parted nine months after the major announcement.

Mack also has a talented sister who attended Orange County High School of the Arts, a prestigious academy in California. Moreover, the actress has a dog named Phantom, with whom she posed for several photoshoots.

For the last three years, Allison seemed to be only tweeting and working alongside Keith Raniere, whose actions will be described in the following.

Some scandals occurred involving Allison Mack. Around a year ago Keith Raniere was arrested since the organization he established was complicit in sex trafficking. Let’s discover more how it started and what Mack has to do with this so-called cult.

Since 2010 Allison joined a multi-level marketing organization NXIVM (it is pronounced nex-e-um). Reportedly, she was invited by her friend and college Kristin Kreuk. Kreuk later confessed in taking part in some programs that helped her to overcome her extensive shyness that wasn’t appropriate for an actress. But she was never involved in illegal actions.

So NXIVM functioned as a skill development academy, and Mack shortly became one of the tutors. There are some real facts that Mack was there such as her tweet dated October 2013, that told her followers how she was inspired back then by Raniere’s speech. She also changed her bio on a personal website and was posted on YouTube discussing the ideas of The Source, a filial of NXIVM. This subsidiary group consisted of versatile professionals aimed at training the newcomers; Mack was entitled as a top trainer.

All this might have been for good, but Raniere was arrested and charged for several violations including people trafficking. He was accused of establishing a secret group or a cult, to be more precise. The whole system worked well: Raniere had confident recruiters, that invited new women who would be later engaged in some rituals. The members of DOS, which is a name of the group, were supposed to obey Keith, answer him in the middle of the night, accept brands with his initials on their hips, and simply behave as his slaves. Obviously, a lot of naked photos were taken and secret information leaked; a criminal complaint considered such actions as forced labor conspiracy. By the way, Mack was also shot nude, and the pictures are available on the Net.

Various news channels reported that on a mugshot taken during Raniere’s arrest a blonde woman was detected. There is no truthful evidence of who she was, but that blonde embodies some of Mack’ characteristics. The woman was given a nickname “Co-Conspirator 1” and was referred to as Keith’s direct slave and second in command. Court documents stated that this woman was an actress who guided by a NXIVM's manager for some time and co-founded The Source. All these facts strangely point at Mack, aren’t they? Moreover, during her defence, she mentioned selling children to Clintons, that made this case even more high profile, but such reference was wholly made up.

The details available today were mostly disclosed by the former members of NXIVM, for instance, Frank Parlato, who even owns a blog. Still, pieces of information continue to pop up, and the lawsuit isn’t over.

What is more, Mack as a member of the cult married Nicki Clyne, a Canadian actress, in order to keep her from deportation. Clyne has not only Raniere’s initials branded but also Mack’s ones. One might decide whether this marriage should be considered legal, but obviously, now love was involved.

At present, Allison Mack's net worth is estimated at $2 Million.