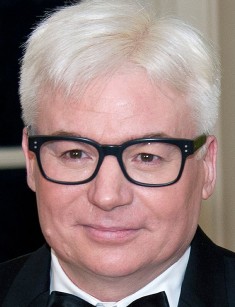 The actor Mike Myers has gained world recognition after the release of the trilogy Austin Powers: International Man of Mystery on the big screens. Since childhood, the purposeful has dreamed of becoming a doctor, but the destiny has brought its changes. Due to this the new star appeared in the world of cinematography.

Mike was born on the 25th of May, 1963 in the family of the former cook of the British army Eric Myers and his wife, Alice. The family was living in the town of Scarborough (in the Canadian state of Ontario).

Even though Mike is not the only child in the family (he has elder brothers Paul and Peter), the parent didn’t leave the future actor on his own. The parents were very attentive about the fact that the children had to be engaged in some activities and not to hang around. Myers started his acting career at the age of eight. He took part in the commercials and even participated in Pepsi, KitKat chocolate advertising and even in Datsun cars commercials.

After the completion of the studies at the high school, the aspiring actor has set off for Chicago. Here during some time, he has been engaged in the comedy performances in the Second City group. In 1985 Mike moved to Great Britain where he together with his like-minded person have founded The Comedy Store Players ensemble. In a year the actor came back to Canada where he continued to perform together with Second City at first in Toronto, and later in Chicago. By the beginning of the nineties, the actor already had many remarkable performances on the local TV channels and took part in all possible media projects.

From 1989 till 1995 Mike Myers took part in the show which was released on NBC TV channel. In the program, Saturday Night Live the actor represented the character called Wayne Campbell. In 1992 Myers together with his colleague from the TV Dana Carvey have adapted the series of the famous theme sketches from this show into the full-length movie Wayne's World. A year later there came out the sequel – Wayne's World 2. At the same time, one more successful picture featuring the actor was released. It was the movie, So I Married an Axe Murderer. Myers has received the fees of two million dollars.

In 1997 the movie Austin Powers: International Man of Mystery came out on the big screen. In this comedy spy fighter, Mike performed two roles – the agent Austin Powers and Dr. Evil. The movie was successful in the hire and earned seventy million dollars (with the initial budget of 20 million).

In two years there came out the sequel to the movie under the title Austin Powers: The Spy Who Shagged Me. Except for the main antagonist and protagonist of this movie, Myers performed the role of the character with the nickname of Fat Bastard. It’s worth noting that the actor whose height is 173 cm and weight is 80 kilos didn't have to put up weight for this role. In this picture, there was used the false body which Mike had to wear during a couple of hours each day. Before the release of Austin Powers: The Spy Who Shagged Me, Myers managed to act his first dramatic role in the movie Studio 54 (1998) in which he embodied the image of the owner of the well-known New York club.

Later the actor has performed one more well-known role: Mike has voiced over the ogre Shrek in the same-name cult animated movie. It’s known for sure that at the beginning Chris Farley was chosen to duplicate Shrek, but the actor suddenly died, and the creators of the movie invited Myers to the film. The actor has presented his markedly Scottish accent to his character. In such a way he emphasized his crudity and rawness.

In 2003 the actor completed his work on the American movie. Nobody Knows Anything!. Next, there was released the children's film with sparkling humor The Cat in the Hat directed by Bo Welch. Alec Baldwin, Dakota Fanning, and Spencer Breslin also took part in the adventure movie. Later the actor has voiced-over the sequels to Shrek: Shrek 2 (2004), Shrek the Third (2007) and Shrek Forever After (2010).

In 2007 Mike received MTV Generation Awards. He became the second Canadian actor after Jim Carrey who owns such an award. Except for this award in 1998, Myers received the prizes for Best Dancing Episode and Best Villain in Austin Powers. In 2000 he won awards for Best Screen Duet and again for Best Villain (Austin Powers: The Spy Who Shagged Me). And, at last, the third picture about the spy the actor was awarded Best Comedy Role.

In 2009 the spectators liked the picture Inglourious Basterds directed by Quentin Tarantino. Brad Pitt, Eli Roth, Christoph Waltz, and Mélanie Laurent have performed in this movie together with Mike.

In a year Mike has presented himself in the comedy The Secret Life of Walter Mitty directed by Norman Z. McLeod. In 2009 Mike Myers got the Golden Raspberry anti-award for the worst male role in the picture The Love Guru.

It’s worth noting that the actor had a few years break in his career that’s why he has not so many roles in his track record for a twenty-year career. The actor himself explained it in such a way that in his opinion he has to have rest for three years before each new role to show to the world the worthy work.

The well-known actor has always preferred to keep his personal life in a secret. The was officially married two times. However, there is almost no information on the web about his relations with the women.

The actor got acquainted with his first spouse Robin Ruzan during the shootings of Wayne's World. The young people officially registered their relations in 1993. The actor has repeatedly called this woman his muse, and they have lived together for 15 years and have divorced in 2008. The reasons for the divorce reasons weren't published anywhere. Though, the actor's fans have assumed that the couple began to have the problem in relations because Ruzan couldn’t become pregnant during five last years.

In 2010 Myers got married to the owner of the cafe network Kelly Tisdale during the secret ceremony. Before the marriage, they have had relations for three years. In September 2011 Kelly gave birth to their son Spike, and in April of 2014 their daughter Sunday was born and in November of 2015 – the baby Paulina Kathleen came to this world.

In one of the interviews, Mike admitted that becoming a father is the best thing happened to him in his life. Myers remembers that after his firstborn's birth he felt lost. At that time the scriptwriter couldn’t get used to the idea that he had become the father. Adam Sandler who is the old friend of producer has returned him to the reality.

Actor of the movie Click said that the birth of the child could be compared with the first love: you are overfilled with a warm and new feeling which you can't describe with the words and which even frightens you. It's not necessary to escape from it. Over time you become conscious of the fact that children are the greatest happiness on the Earth.

Few people know, but Myers is an avid hockey fan (all Mike’s three dogs are called in honor of his favorite hockey players). The actor is going to take his sons to the hockey section.

It's known for sure that the eminent actor has pages neither on Instagram nor Twitter. The fans learn about the latest news from the actor's life from the interviews which from time to time are published both on the news portals and printed editions.

In 2016 there appeared the information in The Hollywood Reporter magazine telling that Mike Myers became engaged in the shootings of the noir-thriller Terminal directed by Vaughn Stein. By the preliminary information, the movie which at present undergoes the stage of post-production will appear on the screens at the end of 2017. 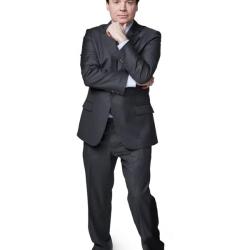