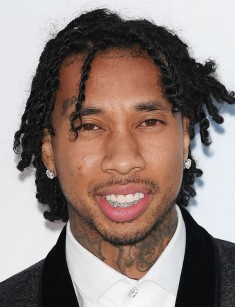 Tyga is an American rapper who became one of the top new rappers in 2008. The musician has often appeared in music charts and tabloids; some materials were scandalous.

The musician’s real name is Micheal Ray Nguyen Stevenson; “Tyga” is an acronym that means “Thank you God always.” Initially, the mother gave him the nickname; she called her son Tiger Woods, a famous American golf player.

The future star was born in Compton, California, on November 18, 1989. The mother came from Vietnam, and the father was Jamaican. On March 7, 2016, Tyga posted on his Twitter page that his father had been serving a life sentence for 25 years.

The information about Micheal’s early life is contradictive. He usually said he grew up in a problem area in Compton; on Bustas, the musician claimed his family lived in a prestigious neighborhood in San Fernando Valley. However, the latter statement could be a joke.

At the age of 11, the boy and his mother moved to Gardena. When Tyga was a kid, he listened to Eminem, Fabolous, and Lil Wayne. Soon, he began to create music on his own; the young talent and his school friends participated in rap battles and uploaded his first songs in online chats.

Micheal’s cousin Travis McCoy, the member of Gym Class Heroes, started taking the young man to the group tours. At that time, Tyga created mixtapes. Travis appreciated his work and showed it to Pete Wentz, the bass guitar player in Fall Out Boy. The musician was impressed by the young man’s talent and became the executive producer of his first independent album No Introduction (2008).

The song “Diamond Life” was used in the game Need for Speed: Undercover and the movie Fighting. In 2007, the rapper appeared on a big stage: together with McCoy, Fall Out Boy, and Lil Wayne, he performed the remix on “Arms Race” at MTV Video Music Awards. The audience and the artists who collaborated with Tyga were excited.

The second album, Careless World: Rise of The Last King, was released on February 21, 2012. According to the musician, this work was supposed to show he had grown up yet preserved some traits of a child. The singles from this album often appeared in prestigious music charts.

The third studio album, Hotel California, came out in April 2013. Although three singles preceded the album and guest stars contributed to this project, it was not as successful as the previous works; critics’ opinions were mixed. On April 12, 2013, the artist participated in Harvard University's Yardfest, although there were attempts to prevent the rapper from the performance because of his misogynic lyrics.

In August 2013, Tyga presented the new single “Throw It Up” with DJ Mustard and announced two new mixtapes. He also collaborated with Justin Bieber and recorded the song “Wait for a Minute.”

The new album was expected at the beginning of 2014, but the conflict with the label postponed the release. Eventually, The Gold Album: 18th Dynasty came out in June 2015; it was distributed only on the Internet.

2015 was also marked with Fan of the Fan the Album, the joint project of Tyga and Chris Brown. Critics were not much enthusiastic. Los Angeles Times characterized the work as the album full of sex, drugs, luxurious cars, and misogyny themes.

In 2017, the fifth album BitchImTheShit2 came out; Kanye West participated in the work on it.

In June 2008, the rapper was robbed; Tyga said these were “some niggas.” Later, Micheal’s jewelry could be seen in an online video of the rapper 40 Glocc. Tyga denied that his colleague was involved in it directly: according to him, 40 Glocc’s people robbed the criminals who tried to escape.

The rapper had some legal troubles; two cases pertained to his music videos. In 2012, two women who shot for “Make It Nasty” sued the musician because he had published the video where their nipples were exposed without the primary consent. In 2013, there was a similar case: Tyga was accused of fraud, intrusion to private life, and sexual harassment.

The same year, the rapper had to deal with one more issue: the jeweler Jason James claimed the artist had not paid $91 thousand for the jewelry. The rapper did not appear at court and explained it by his disease. Tyga was obliged to pay $200 000 to the aggrieved party, but the man gave only half of that money to the jeweler. In addition, the singer was sued because of rent and tax non-payment.

Tabloids watch Tyga all the time, and he cannot keep the details of his private life in secret. In 2006, the man was seeing the singer Kiely Williams; in 2009, he had a romance with the supermodel Chanel Iman.

In 2011-2014, the rapper had the relationship with another model and strip dancer, Blac Chyna. In October 2012, their son King Cairo Stevenson was born; Tyga purchased a mansion in California for his family and had a new tattoo: the name of his son. Overall, the rapper has 50 tattoos; he gained the first one when he was 14.

The model Kylie Jenner became the rapper’s next girlfriend. The media were actively discussing this romance: the lovers’ age gap added more interest. Besides, rumors had it Kylie was 16 when she started dating Tyga; in California, the age of consent was 18. In April 2017, the couple broke up.

On February 1, 2018, Kylie gave birth to a girl; there were speculations that Tyga was the child’s father because she was dark-skinned. However, the rapper denied that information.

On February 16, 2018, Tyga presented the sixth studio album Kyoto. At the same time, the single “Taste” recorded with Offset came out. The new single reached number eight in Billboard Hot 100 in the USA; it was the musician’s first work included in this chart in the last three years. Besides, the rapper collaborated with Iggy Azalea and worked on her single “Kream.”

Tyga regularly gives concerts and tours. In May 2018, he performed in Moscow, Russia (the club GLAVCLUB GREEN CONCERT).

Nowadays, Tyga is engaged in music and acting. For instance, he joined the cast of the third season of the horror series Scream.

The son is one of the most significant people in the rapper’s life. The musician often posts pictures of the boy on his Instagram page; they make a striking contrast with photos of concerts, half-naked girls, and Tyga’s lewd gestures. 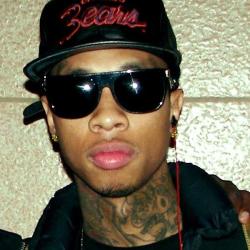