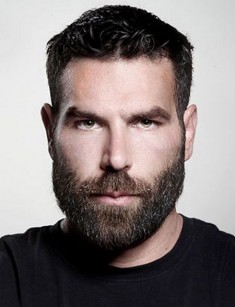 Dan Bilzerian is a professional poker player of the Armenian origin, the star of social networks, and the person of the ambiguous reputation. He became popular thanks to Instagram: the man created the image of a lucky player as people unfamiliar with this sphere see it.

Dan Brandon Bilzerian was born in Tampa, Florida, on December 7, 1980, into the family of Paul Bilzerian and Terri Steffen. The father began his career from investing into real estate property and later started corporate takeover. Thanks to that, he made a fortune and created trust funds for his sons.

The boy’s childhood was ambivalent. On the one hand, he had everything necessary, and the family members were intelligent; on the other hand, Dan admitted that comfort could not substitute attention. Perhaps, the lack of care made the man the person he is now.

The father threw himself in business and rarely appeared at home: he was more interested in financial deals, some of which were pretty suspicious. Still, the father’s visits brought no relief. For instance, he suited the baseball team where small Dan played.

When the boy turned ten, the father was put in prison for stock exchange fraud and non-payment of taxes. As a result, the boy’s relationships with his classmates deteriorated, and conflicts took place frequently. Throughout a year, Bilzerian was expelled from two schools and had to go to a military school.

Paul spent 13 months in prison; he obtained a conditional release. The family moved to Utah, but Dan’s relations with the new school failed as well. One day, he brought his father’s M16 rifle (Paul fought in the Vietnam War). As the young man explained, he wanted to show the rifle to his classmates. Naturally, Bilzerian was expelled from school, and the family was asked to leave the state.

Dan was looking for his place in the world and joined the Navy SEAL training program. The young man did not complete the course: he did not have the necessary persistence and subordination understanding. In a year and a half, he was expelled for the safety violation on the shooting range. Later on, Dan entered the University of Florida where he studied business and criminology.

Dan started playing poker during his studies. In 2009, he participated in the World Series of Poker and got the 180th position. The next year, Bluff Magazine called Bilzerian one of the funniest poker players.

In November 2013, Dan announced he had won $10.8 million overnight; in 2014, he reported his annual poker earnings were $50 million. This information was not confirmed officially. Besides, Bilzerian marked he did not play against professionals after he had lost $3.6 million at one session.

It is peculiar Dan has won no poker tournament: number 180 remains his best achievement. Poker players call him a bad player with a lot of money. Rumors have it that Bilzerian’s fortune is the result of well-thought financial operations with his father’s wealth.

In April 2017, Dan invested money in Bitcoin: he believed this cryptocurrency could bring him profit.

Besides, Bilzerian tries to recommend himself as an actor; today, his filmography is not big. The man had episodic roles in five movies including Lone Survivor. Dan paid a lot of money to gain the role of the character who would appear on the screen for no less than eight minutes and pronounce 80 words. During the final movie editing, his character was cut off almost entirely. The actor pressed charges against the producers but later dropped the case and explained his decision by the movie’s notable success.

In June 2015, Dan claimed he would run for the presidency in 2016; by December, he rejected that idea.

Bilzerian has Armenian roots; as he said, half of his father’s family died during the Armenian genocide. Dan has two brothers, Adam and Nelson. Adam is also a poker player.

The man has earned his fame as the King of Instagram, not a poker player. Bilzerian is an active user of social networks; he has almost 1.5 million followers on Twitter, and 24 million people follow him on Instagram. Fans are attracted by the frivolous style of his blogs: Dan uses swear words, reveals the details of his personal life, and posts photos with guns, expensive accessories, and half-naked girls.

Beard is one of the most significant parts of the man’s image. One can find a few photos of Bilzerian with his chin shaved, though. Dan appreciates his beard a lot: he refused to shave for $100 000.

On December 9, 2014, Dan was arrested in the Los Angeles International Airport and accused of transferring bomb components. The accusations were false.

Bilzerian is known for his love of weapons; he has at least 97 items. The man says he is afraid he will not be able to choose a gun if a bugler enters his house one day.

The millionaire is also fond of women; he is surrounded by models. Bilzerian’s chauvinistic opinions are widely discussed. For instance, he said: “Ugly girls hurt my eyes.”

In 2017, Dan introduced the 21-year-old model Sofia Bevarly as his girlfriend. The man has no children.

The player is very fond of his pets; he has two cats and two goats. The cat Smushball even has its own Instagram blog and has 700 000 followers.

Bilzerian’s health leaves much to be desired: alcohol and drugs led to three heart attacks, and the man is only 35. Still, Dan is athletic, and his body looks good in photos. Bilzerian’s height is 175 cm., and his weight is 88 kg.

Nowadays, Bilzerian is the American and Armenian citizen. He received the latter on August 27, 2018.

The man received the international arrest warrant from Azerbaijan for visiting Nagorno Karabakh, the territory that the accusing party considered occupied.