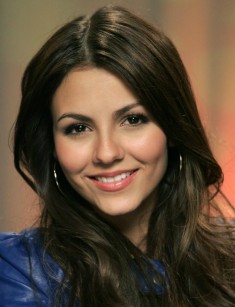 Victoria Justice is an American actress, who already in childhood gained popularity when she was playing a role in the children's and youth series. Moreover, Victoria Justice is known as a voiceover actress and a singer. Victoria recorded a number of the compositions which sounded in the series with the participation of the girl and also released her own singles.

Victoria Dawn Justice who is better known to the public as an actress Victoria Justice was born in Florida, in the famous town of Hollywood in 1993. Victoria has multinational blood – English, German, French, and even Puerto-Rican background.

At the age of eight, the girl said to her parents – Serene and Zack Justice that she would definitely become an actress. And two years later the family of Justice they moved to California and settled in Hollywood. This happened after Victoria appeared on the screen for the first time in the popular youth series Gilmore Girls. Since that moment young Justice began to perform on the television on the regular base. She often appeared in the commercials and song videos.

In a short time, Victoria was chosen as a face of children's brand of South Beach clothes, popular in the United States. Later the grown-up Victoria Justice advertized clothes from Ralph Lauren and Guess clothing brands. She was destined to have brilliant modeling future, but the girl chose the acting career.

Victoria Justice began her career at the age of ten, and it was developing rather promptly. After the episodic role (she appeared in one of the episodes) of the sitcom Gilmore Girls, the girl was invited to take part in the episode of the series When Do We Eat? And in the melodrama Silver Bells, she brilliantly coped with the role of the heroine called Rose.

The years 2007 and 2008 were the time of the real breakthrough for Victoria Justice. She appeared in two seasons of the extremely popular series Zoey 101 where she played the role of the character called Lola Martinez, the student who pretended that she was an actress. This movie has brought extreme popularity to the actress. People began to recognize her, and the army of her fans doubled.

The year 2009 has brought even more fame to the actress. Victoria Justice was invited to perform in the series True Jackson. At the same time, she played a role in the movie Spectacular!. The movie is remarkable because of the fact that Victoria performed her three songs and in such a way she strengthened her position as a singing actress. The movie Spectacular! Has brought Justice not only popularity but also huge fees as the picture attracted more than 4 million spectators at the movie theaters during the time of the premiere.

The success of the picture Spectacular! has become a step to one more victory: Victoria Justice received the invitation to shoot in one more sensational series – iCarly. But the sitcom Victorious directed by Dan Schneider which was released in 2010 has become a real triumph for the actress. Justice performed the leading role of the beginning singer Tori Vega. In the series there appeared the stars of youth series - Ariana Grande and Elizabeth Gillies.

The sixteen-year-old Tori studies at the Hollywood School of Arts together with other talented students who are ready for everything in order to achieve success. The sitcom was shown on the Nickelodeon channel. There were four seasons. The project attracted approximately six million spectators in front of the screens what allowed the critics to call this project very successful. During two years the series was recognized as Favorite Tv Show by the movie critics and audience at the annual competition of the channel - Nickelodeon-Kids Choice Awards. Moreover, the sitcom received four nominations for Emmy Awards.

The series The Boy Who Cried Werewolf in which Victoria took part became one more successful TV project popular among the youth. It was broadcast on the Nickelodeon channel, and almost six million spectators have seen it. Justice appeared on the screen in the image of the girl werewolf who turns into the werewolf in the full moon.

Victoria continues to take part in youth series, despite her age. The actress has a tiny figure (she is 166 cm tall, and she weighs 52 kilos) what allows Victoria to look natural in the school and teenage plots.

The year 2010 was remarkable also by the fact that the fans of the musical talent of Victoria Justice heard her new song "Make It Shine" which almost at once became a hit in the USA. At present Victoria Justice pays more attention to her musical career.

Even though Victoria released her first single "A Thousand Miles" in 2007, she became seriously engaged in the music only in 2010. After a three-year break, except for the popular song "Make It Shine," the actress released the following compositions - "You're the Reason," "Finally Falling," "Tell Me That You Love Me," "Freak the Freak Out."

In 2011 Victoria Justice delighted her admirers again with the new compositions "Favorite Food", "I Want You Back", "Song to You", "Beggin' On Your Knees", "Best Friend’s Brother", "All I Want is Everything", "365 Days", "It’s Not Christmas Without You".

The singer continued to enrich her musical assets next year as well. In 2012 she released four more songs: "Countdown," "Take a Hint," "Make It in America," "Here 2 Us".

The actress has had a successful music tour across big Ameican towns and announced the release of her first album. On Twitter, Victoria promised her fans that she would release the album in 2013 or at the beginning of 2014. The girl hasn’t deceived the expectations of her admirers, and in 2013 she presented her debut album "SHAKE!" to the fans. In a short time after that Victoria Justice said that she would like to concentrate on the acting profession and stopped working on the new songs.

In 2015 the actress performed a major role in the gripping drama series Eye Candy.

Victoria also pays attention to her career as a media person. On Instagram, the girl has a verified account where she has more than ten million subscribers. If talking about the appearance, Justice looks similar to another famous actress - Nina Dobrev that’s why the fans also predict that Victoria would have success in the mystical pictures.

At present, the model is actress are a little bit more than twenty years old. Victoria is focused on her career development that's why she has little time left for her relations. Nevertheless, Victoria Justice's personal life is rather saturated, and the tabloids often write about the relations of the actress. The beautiful actress had a couple of love affairs. During some time Victoria had relations with her colleague - the actor Josh Hutcherson. Then she had short love affairs with Nicholas Hoult and Avan Jogia.

Since 2014 Justice had romantic relations with the actor Pierson Fodé with whom Victoria met during the shootings of the sitcom Naomi and Ely's No Kiss List. But Victoria and boyfriend broke up at the end of 2015.

In 2016 the actress performed a secondary role in the American sitcom under the title Cooper Barrett's Guide to Surviving Life. The series tells about the life of the ordinary man, who tries to find the sense of life, to achieve the mutual understanding with his family and friends and also to find the way to express his feelings to his neighbor Kelly. Victoria Justice performed the role of Ramona Miller, a cruel businesswoman and a business shark who later becomes Kelly’s friend.

The same year Victoria Justice has become a guest of the popular TV show under the title The Rocky Horror Picture Show.

At the beginning of 2017, Victoria Justice appeared in the major role in the youth comedy The Outcasts The movie is dedicated to the American high schools and internal war of the losers and stars of the school. Two clever girls who were mocked at by the popular girl decide to takea revenge for such attitude and break all the system of division and persecution. 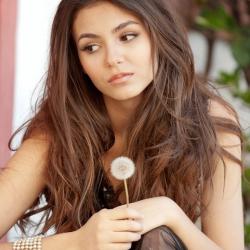