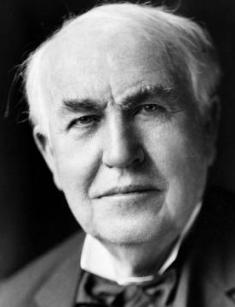 Thomas Edison is known to the world as the inventor who managed to improve the electric bulb, as well as the author of the telegraph, the electric chair, and the telephone greeting. However, unlike many geniuses, the man was distinguished by a bright talent for entrepreneurship.

Thomas Alva Edison was born on February 11, 1847, in the American city of Milan, in a family of immigrants from Holland. In childhood, Al, as the future inventor was nicknamed, did not enjoy good health – he was short and sickly (although on baby photos, Thomas looks plump). Besides, scarlet fever affected his hearing - the boy was deaf in his left ear. Parents surrounded the son with care because before that, they lost two children.

Thomas did not manage to settle in school, and teachers grew tired of the "disabled" child in three months, after which his parents took him out of school with a scandal and put him on homeschooling. Edison was introduced to the basics of school science by his mother, Nancy Matthews Elliott, the daughter of a priest with a brilliant upbringing and education.

Thomas grew up an inquisitive child, keenly interested in what was happening around – he loved to look at the steamers, often hung around the carpenters, watching their work. Another unusual activity, which fascinated the young man, was copying the inscriptions on the signs of warehouses.

With the Edisons' move to Porto Huron, seven-year-old Thomas became acquainted with the fascinating world of reading and first tried his hand at inventing. At that time, the boy sold fruits and vegetables with his mother, and in his spare time, ran to the public library of the town for books.

When the boy reached the age of 12, he got acquainted with the writings of Edward Gibbon, David Hume, Richard Burton, but he read his first scientific book and applied it on practice at the age of 9. Natural and Experimental Philosophy by Richard Green Parker combined scientific and technical achievements and examples of experiments that Thomas tried himself.

Chemical experiments required investments, in the hope of earning more money, young Edison got a job selling newspapers at the railway station. The young man was even allowed to equip a laboratory in the luggage car of the train, where he conducted experiments. However, not for long – because of the fire Thomas was expelled along with the laboratory.

While working at the station, an event occurred that helped enrich working biography of the aspiring inventor. Edison saved the stationmaster's son who got under the wheels of a moving car, for which he received the post of Telegraph operator, where he worked for several years.

In the twilight of his youth Thomas wandered through America in search of a place in life: lived in Indianapolis, Nashville, Cincinnati, returned to his native state, but in 1868 went to Boston, and then to New York. All this time he barely made ends meet, because he spent the lion's share of income on books and experiments.

The secret of the great self-taught inventor was simple and lay in the quote of Thomas Edison himself, which eventually became a catchphrase:

He proved that his words were valid a hundred times, spending night and day in the laboratory. As he admitted, sometimes he was so carried away that he spent on work up to 19 hours a day. On Edison's record, there are 1093 patents obtained in the United States and three thousand documents on the authorship of inventions that are issued in other countries. However, people did not buy Edison's first inventions. For example, people considered the counter of votes in the elections to be useless.

Luck smiled at Thomas when he was working for the Gold and Stock Telegraph company. Thomas joined the staff because he managed to fix the telegraph when no one could cope with this task, even special masters. In 1870, the firm bought his improved cabling system of the exchange of bulletins on the price of gold and stock. The inventor spent the money on opening his workshop for the production of tickers for transactions, a year later Edison owned three workshops of such kind.

Soon things were even better. Thomas founded the company Pope, Edison & Co, the next five years were fruitful, in particular, they came up with the greatest invention of the Quadruplex telegraph with the help of which it became possible to transmit up to four messages on one wire. The inventive activity required a well-equipped laboratory, and in 1876, near New York, in the town of Menlo Park, began the construction of an industrial complex for research. Hundreds of bright minds and skillful hands joined the laboratory later.

Attempts to convert telegraph messages into sound resulted in the appearance of a phonograph. In 1877, Edison used a needle and foil to record a children's song Mary Had a Little Lamb. The innovation was considered to be on the verge of fiction, and Thomas was nicknamed the Wizard of Menlo Park.

Two years later, the world adopted the most famous invention of Thomas Edison-he managed to improve the electric bulb, extending the time of its operation and simplifying the production. The existing lamps burned out after a couple of hours, consumed a lot of currents or were expensive. Edison said that soon, the whole of New York would be illuminated by fireproof bulbs, and the price of electricity would be affordable and began to experiment. For the filament, he tested 6000 materials and finally settled on carbon fiber, which burned 13.5 hours. Later, its lifetime increased to 1200 hours.

Edison demonstrated the possibility of using light bulbs, as well as the developed system of production and consumption of electricity with the creation of a power plant in one of the New York districts: he turned on 400 lamps. The number of electricity consumers in a few months increased from 59 to half a thousand.

In 1882, the "war of currents" broke out, which lasted until the beginning of the second Millennium. Edison was for the use of direct current, which, however, was transmitted without loss only over short distances. Nikola Tesla, who joined Thomas ' laboratory, tried to prove that alternating current was more efficient – it could be transmitted for hundreds of kilometers. The future legendary inventor offered to use it for power plants and generators but found no support.

Tesla, at the request of the owner, created 24 cars on alternating current, but did not get the promised $ 50 000 from Thomas Edison for his work, he got offended and became his rival. Together with industrialist George Westinghouse, Nicola began to introduce alternating current everywhere. Thomas sued and even conducted black PR campaigns, proving on the killing of animals the danger of this type of current. The peak of the war was the invention of the electric chair for the execution of criminals.

The end of the war was put only in 2007: the chief engineer of the company Consolidate Edison solemnly cut the last cable through which direct current was supplied to New York.

The prolific inventor also patented a device for radiography, calling it a fluoroscope, and a carbon microphone that increased the volume of the telephone. In 1887, Thomas Edison built a new laboratory in West Orange, more significant than the previous one and equipped with the latest technology. Here he invented the recorder and the alkaline battery.

Edison left a mark in the history of cinema. In Thomas's laboratory, a kinetoscope was invented, a device capable of showing moving images. In fact, the invention was a personal cinema – through an individual eyepiece, the man watched the film. A little later, Edison opened the Parlor Kinetoscope room and equipped it with ten boxes.

Thomas's personal life was also successful – he managed to marry twice and have six children. With his first wife, the telegraph operator Mary Stilwell, the inventor almost went down the aisle two months after meeting. However, the ceremony had to be postponed due to the death of Edison's mother. The wedding was held on December 1871. A funny event is connected with the celebration: Thomas went to work immediately after the ceremony and forgot about the wedding night.

In this relationship, a daughter and two sons were born, the eldest children – Marion Estelle and Thomas Alva at home had the nicknames Dot and Dash, in honor of Morse Code. Mary died at 29 of a brain tumor.

Soon Edison remarried, according to historians, for great love. The one was 20-year-old Mina Miller, whom the inventor taught Morse code, and in this language, he even proposed to her. Edison and Mina had two sons and a daughter, the only child who had kids of her own.

The great inventor died when he was almost 85 years old, and he worked to his last day. Thomas Edison had diabetes; the terrible disease gave complications incompatible with life.

He died in the fall of 1931, in a house in the town of West Orange, which he bought as a gift to his bride, future wife Mina Miller, 45 years before. Edison's grave is located in the backyard of this house.