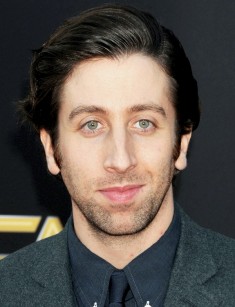 Simon Maxwell Helberg was born on December 9, 1980, in Los Angeles. His father is Sandy Helberg, the actor (High Anxiety, History of the World, Part I, Spaceballs) and the founder of the improvisation troupe The Groundlings. The Jewish parents brought up their son according to their people’s traditions.

The boy was interested in music from early childhood; he learned how to play the piano. Besides, Simon liked martial arts. When he watched the 1984 movie The Karate Kid, Helberg wanted to become just like the main character. He succeeded: he began to practice at five and gained a black belt in karate.

Soon, Helberg entered the Crossroads School in Santa Monica, California. At that time, he got engaged in theater and participated in school performances at 15-16 years old. He loved comedies immensely. Soon, Simon’s drama teacher noticed his talent and began to develop his acting abilities.

After graduation, Helberg decided he wanted to be an actor. He enrolled at the New York University's Tisch School of the Arts. Many stars came from that school: Felicity Huffman, Jessica Alba, Jason Ritter, and others. As a student, Simon continued to make music: he performed in youth ensembles and created several projects on his own.

In 1999, Helberg debuted in Lawrence Kasdan’s comedy Mumford and played a college roommate. At the same period, he appeared in episodic roles in TV projects Popular, Sabrina the Teenage Witch, Son of the Beach, and so on.

In 2002, Simon took part in the popular American sketch show MADtv on Fox channel. The genre of improvisation was close to Helberg from the time he began to visit his father’s troupe performances. Still, the work on television implied some limits and did not give the young man the opportunity to express himself. The comedian spent only one season in this project.

The same year, the youth comedy National Lampoon's Van Wilder came out; Simon played a geek student. Later on, the audience had the chance to see the actor in Less than Perfect, Old School, A Cinderella Story, and Good Night, and Good Luck.

Helberg continued to appear in TV projects and took part in the series Studio 60 on the Sunset Strip that ironically described the back-stage life of popular shows like MADtv. Simon’s character, Alex Dwyer, famous for his parody on Nicolas Cage, was close to the actor in terms of his spirit and mindset.

At the beginning of the 2000s, Simon and the comedian Derek Waters created the comic duet Derek & Simon. They released two short-length movies: Derek & Simon: A Bee and a Cigarette and Derek & Simon: The Pity Card. Both were presented at South by Southwest Film Festival and Sundance Film Festival. Later, these works were united in a half-an-hour movie broadcast on HBO.

In 2006, Helberg appeared in the comic commercials for the English financial company Virgin Money.

In 2007, together with Bob Odenkirk, the duet presented the web series Derek & Simon: The Show for the humorous website Super Deluxe. This project portrays two friends, Simon and Derek, who walk through Los Angeles and try to understand lovers’ problems and comprehend the secret of people’s relationships. They spend most of the time in bars, chase women, and find themselves in ridiculous, funny situations.

2007 brought the break-through moment for the actor: he heard about the auditions for the new comedy series by Chuck Lorre and Bill Prady. Helberg’s agent recognized the ironic geek engineer in the actor and enrolled him in the auditioning. Soon, the young comedian received the role.

The Big Bang Theory dramatically changed Helberg’s life. His character, the graduate of the Massachusetts Institute of Technology, is the only person among his friends who has no degree. Thus, he is often laughed at. Nevertheless, Howard has the most eccentric and memorable appearance; he is the first who found his love, the tiny young woman Bernadette Rostenkowski (Melissa Rauch). The actors look perfectly: Helberg’s height is 163 cm., and his weight is 70 kg.; Melissa’s height is 152 cm., and her weight is 57 kg.

Season by season, Simon’s character was evolving, yet he never ceased to be funny: the hapless womanizer in parrot-like clothes, mama’s boy, astronaut, husband, and father.

Just like Johnny Galecki, Jim Parsons, Kaley Cuoco, and Kunal Nayyar, Helberg is one of the lead actors who has gained the audience’s love and global fame. He received the Critics' Choice Television Award for Best Supporting Actor in a Comedy Series for this series.

Simon got $100 million for each episode. In the 10-12 seasons, the main actors had to share some money with Melissa Rauch and Mayim Bialik whose earnings used to be five times less. In 2016, Helberg was number four in Forbes’s list of highest-paid stars: he earned $22 billion.

The Big Bang Theory was being shot for 11 years. In 2018, the last episodes were broadcast.

Together with The Big Bang Theory, Helberg worked on other projects. In 2008, the comedian participated in the short movie Dr. Horrible's Sing-Along Blog. In this fantastic musical, the actor personified Moist, the main character’s funny friend and assistant who regularly produced moisture.

The next year, the artist appeared in Coen brothers’ A Serious Man and played a young rabbi. The movie was nominated for the Academy Award in 2010.

In 2013, Simon’s wife, Jocelyn Towne, presented her indie drama I Am I; Helberg was a producer and one of the lead actors.

In 2014, Helberg tried himself as a director: he debuted with the melodramatic comedy We'll Never Have Paris; he also starred there. It was the second project where the man co-worked with his wife.

In 2016, the artist was offered the lead role in Florence Foster Jenkins that told the story of the American opera singer and piano player; she became famous for her performances despite the lack of an ear for music, vocal abilities, and rhythm. Simon personified Cosmé McMoon, the diva’s accompanist; he was nominated for the Golden Globe Award for Best Supporting Actor – Motion Picture.

Simon Helberg is married to his old beloved one: the actress, producer, and director Jocelyn Towne. Her uncle, the American Jewish scriptwriter, is famous for the movies Chinatown by Roman Polanski and Mission: Impossible (two parts). The couple has two children.

Before he proposed, Helberg broke up with his future wife and fled, terrified by the idea of the marriage. Still, this story had a happy ending. Simon and Jocelyn married on July 15, 2007. In 2011, the spouses bought a house in Los Angeles for $290 000; the former wife of Charlie Sheen used to own it.

On May 8, 2012, the couple’s first daughter, Adeline, was born. The spouses threw a party to celebrate the girl’s birth. Helberg’s friends, the actors and creators of The Big Bang Theory, were present: they are significant people for the comedian.

Jocelyn and Simon are not only partners but also colleagues; they communicate all day round. In his interviews, Helberg mentioned he liked to work with his wife: they had similar tastes and vision related to movie making.

On April 23, 2014, the couple’s second child, the son Wilder, was born. The happy parents decided they would not know the kid’s sex until their birth so that it would be a surprise.

In May 2018, it was announced that The Big Bang Theory finished. Similar to other actors of the series, Simon Helberg is ready for new projects and participates in auditions for various TV projects.

Judging by the actor’s Twitter posts, he is interested in the political situation in the United States. Helberg actively encourages people to vote.

There are few personal photos of the artist in social networks. Helberg is not registered on Instagram. 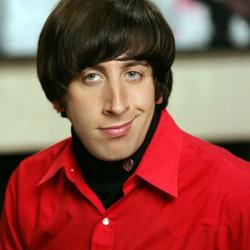