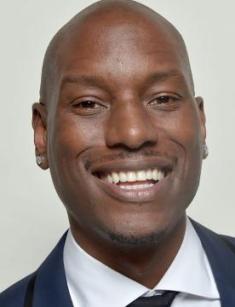 Tyrese Gibson is an American rapper, songwriter, actor, producer, and VJ, who became famous after the release of the films 2 Fast 2 Furious, Flight of the Phoenix, Death Race, and Transformers. Tyrese Darnell Gibson was born on December 30, 1978, in Los Angeles, California. The actor's mother, Priscilla Murray, worked as an ordinary bank clerk, and his father Tyrone Gibson was engaged in software development. The parents of the future VJ divorced when Gibson was barely five years old.

The active boy was raised by the mother who had to take care of three children (the actor has two elder brothers) when her husband left the family. Little Tyrese was a curious child. He had a wide range of interests. The boy liked learning foreign languages, visual arts, dancing. However, his main hobby was music. The future artist showed an interest in hip-hop culture at the age of 12. At that time, he wrote his first piece of music and began to master sample and beat making software.

Three years later, the talented young man won a talent show and appeared in a Coca-Cola commercial. The 17-year-old man was by noticed the American designer, Tommy Hilfiger, who signed a contract with him. Modeling career allowed Gibson to earn the amount of money needed to release an album. Gibson retired from the modeling business preferring the profession in the hip-hop industry. Tyrese's stage name is Black-Ty. For a few years, he performed in the underground band Triple Impact, after which he became a solo artist.

Gibson's debut album Tyrese was released in 1998 and certified Platinum; moreover, the song “There For Me [Baby]” topped the American charts for a few weeks. Tyrese's studio albums 2000 Watts, I Wanna Go There, Alter Ego, Open Invitation, Black Rose were released in 2001, 2002, 2006, 2011 and 2015, respectively. During his career, Gibson managed to work with Busta Rhymes, Tupac, Ludacris, and even Michael Jackson.

In 2001, Tyrese made his movie debut in John Singleton's drama Baby Boy. The film focuses on a dark-skinned man named Jody who at the age of 20, has already two children who live with his mother. The infantile young man does not seem interested in becoming a responsible adult, preferring his best friend, Sweetpea (Snoop Dogg) to job stability and family. Tyrese recorded two soundtracks for the film in collaboration with Snoop Dogg ("Just a Baby Boy" and "Jody Meets Rodney").

In 2003, Gibson starred in the crime action movie 2 Fast 2 Furious, in which his colleagues on the set were Paul Walker, Eva Mendes, and James Remar. In December 2004, the film Flight of the Phoenix premiered, based on the novel of the same mane by Elleston Trevor. Phoenix has been associated with vital energy and its infinity for many nations of the world. This bird burns itself to death, and then emerges from the ashes, meaning a continuation of life after physical death.

The allegory of this magical creature is shown in this film, in which the priorities and values of the characters go through a serious test. In 2005, Tyrese's filmography included a role in the movie Four Brothers. In the crime action movie, Gibson portrayed Angel Mercer, one of four brothers who gathered together to find out the details of their mother’s death.

2006 was marked by the release of the film Annapolis and Waist Deep. In 2007, the actor appeared in Transformers, which tells about intelligent alien robots that can transform into different vehicles. In 2008, Tyrese’s filmography included the fantasy action movie Death Race in which Gibson worked on the same set with actors Jason Statham, Joan Allen and Ian McShane.

In the 2010 film Legion, Tyrese landed the role of Kyle Williams who fought for his life. This story tells about God who has lost faith in mankind and has sent his angels to destroy the human race. Archangel Michael wants to defend people, uniting under his command a few outcasts who wait patiently for the birth of God in the desert. From 2011 to 2015, Tyrese starred in Fast Five, Transformers: Dark of the Moon, Fast & Furious 6, and Furious 7.

Gibson does not like to tell about his relationship with women. Despite the actor’s efforts not to make his private life public, sly journalists have always managed to find out information about his girlfriends. It is known that the eminent musician has been married and has a child. However, there is almost no information on the Internet regarding his married life.

On November 30, 2013, Tyrese’s close friend, the actor of The Fast and the Furious franchise, Paul Walker, died in a car accident. Gibson was among those who carried the coffin at the artist’s funeral on December 14 in Glendale (California). Paying last respects, Gibson, as well as many other people, could not hold back tears.

In April 2017, the eighth installment of the cult American action movie The Fast and Furious was released. Gibson played the role of Roman Pearce in the film, which tells about the adventures of Dominic Toretto’s (Vin Diesel) team. The fifth installment of the Transformers film series, Transformers: The Last Knight, premiered in June of the same year. In Michael Bay's film, the actor returns as Robert Epps, the sergeant in the United States Air Force.

At the moment, Gibson is traveling around the world, presenting his book “How To Get Out Of Your Own Way” in different cities and countries. The actor’s close friend, Will Smith, has also participated in an advertising campaign, timed to coincide with the release of the book. Moreover, Tyrese, who is 5.9 ft. (180 cm) tall, began collaborating with Circle of Love Foundation, a charity organization, which members are many Hollywood stars.

The leading actor of the film Waist Deep regularly posts photos on Instagram, depicting specially designed products (t-shirts, bracelets), and encourages subscribers to buy these goods because all the money from the sale can help to save someone's life. It is worth mentioning that social media are not the only source of the latest news about the life of Tyrese. The content related to the career of the Hollywood star is also often published on various Internet portals and in print media.

Tyrese Gibson’s net worth is estimated at $10 million.