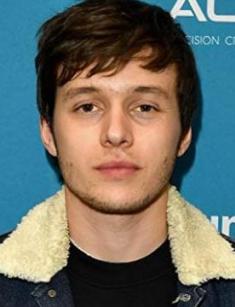 Nicholas John Robinson (Nick Robinson) is an American actor, who gained popularity after shooting in the series Melissa & Joey and melodrama The Kings of Summer. The actor became the main actor in the blockbuster Jurassic World, the 4th part of the series, the first movie which came out two years before the birth of Nick. Today, he continues to build a movie career, appearing in high-profile projects, one of which was the drama Love, Simon.

Nick was born March 22, 1995, in Seattle, Washington. His father, Michael Robinson, had two children from his first marriage. When he married Denise Podnar, the family had five more. Nicholas became the older of his brothers and sisters. In Seattle, the boy graduated from junior high school. He also had time to study for one year in the most prestigious Jesuit high school in the city.

At a relatively early age, parents sent Nick to a theater studio called, where professional teachers were able to quickly identify the inherent talent of the acting boy and helped him develop his abilities. At the age of 11, Robinson made his debut in the stage adaptation of Charles Dickens' novel A Christmas Carol.

In 2008, parents managed to get a meeting with Matt Cassella - the legendary Hollywood Talent Scout, who was looking for new talents. After talking to the young actor, Cassella was fascinated by his smile and openness, expressed the view that the boy is waiting for a great future, and recommended to go immediately to Los Angeles.

Matt gave the contact details of the acting agency Savage, whose client Nick became. But, unfortunately, when the Robinsons came to Hollywood, there was just in the midst of the 2007–2008 Writers Guild of America strike. The family returned home, and Nick continued to play in the theater.

Soon the teenager still moved to Los Angeles and studied at the specialized school Campbell Hall School for children gifted in the arts. In 2013, he became a student at New York University.

He made his debut in the movie industry at the age of 4, playing episodic roles in the movies Tom's Midnight Garden and Midsomer Murders. A year later, the boy's filmography was replenished with the third tape called Vatel, a biographical drama about the time of the French King Louis XIV. Robinson had a chance to work on the same stage with the stars of the world movie industry, such as Gérard Depardieu, Uma Thurman, and Tim Roth.

The next time the actor appeared on the screen only in 2009, performing the main role of a young father in a fantastic short movie by Travis Senger сalled CC 2010.

In 2010, after the second audition, Nick Robinson received the role of Ryder Scanlon, the brother of the heroine Lennox Elizabeth Scanlon (Taylor Spreitler), in the comedy sitcom Melissa & Joey, which was broadcast for five years on the ABC cable channel. The story is about teenagers in the care of former top executive Joe Longo (Joey Lawrence), who begins an affair with their aunt Melissa Burke (Melissa Joan Hart).

The project was named the most popular comedy series in 2015. Nick participated in 91 episodes of 104 filmed. In the credits, Nick passed as Nick J. Robinson. Later on, the middle name of the actor was not used.

In parallel with the serial comedy Melissa & Joey, the tall young actor with the height of 6'2'' (188 cm) and the weight of 156 lbs (71 kg) starred in a teenage melodrama called Frenemies, starring Jake Logan. The movie was successfully held in 2012 on the Disney Channel. Nick's partner in this movie was another rising star, Bella Thorne.

In the same year, the HBO cable channel launched a series Boardwalk Empire," in which Robinson received an episodic role of Rowland Smith. The series told the story of the origin of the gambling business in America at the beginning of the 20th century and was broadcast for five seasons. The main roles in the criminal drama played Aleksa Palladino, Steve Buscemi, and Michael Pitt.

By 2013, the actor had already had some fame due to years of shooting in the daily television series. Still, the serious attention of critics, directors, and viewers, he attracted after the release of an independent melodrama, The Kings of Summer, where he performed the leading role of Joe Toy. The movie, shot in 3 months, took 17th place in the list of Best Summer Films - 2013.

Interestingly, at the first showing at the Sundance Film Festival, the film was shown under the title The Toy's House. And under the well-known name of The Kings of Summer it was demonstrated for the first time at the Cleveland International Film Festival. Together with Robinson in the main cast included Gabrielle Basso, Moisés Arias, Nick Offerman, and Alison Brie.

Besides, Nick Robinson played the role of Zack Mitchell in the 4th part of the Jurassic Park series. This fantastic movie was the best box office film in 2015 and ranked 5th in the history of cinema with $1.6 billion in box office receipts.

The preparation for it took ten years. The artists-animators created 14 new models of dinosaurs, which were not met in previous versions of the franchise. The leading roles, along with Nick Robinson, were played by Chris Pratt, Bryce Dallas Howard, Vincent D'Onofrio, Ty Simpkins.

As Robinson remembered, the first franchise movie was one of his favorite movies in his childhood. The boy repeatedly reviewed it on a cassette video recorder. Subsequently, working on the project, Nick was lucky to meet Steven Spielberg. The performer told that the movie took place in picturesque locations, some scenes were filmed in the jungle in Hawaii, and scenes with dinosaurs were made in the studio. As a rule, the ancient monsters on the set were replaced by light bulbs or tennis balls attached to sticks.

In 2016, the screens released a post-apocalyptic movie The 5th Wave, a screen version of the acclaimed novel by Rick Yancey. Nick Robinson turned into Ben Parish nicknamed Zombie, who lived in the society of the future, which because of the invasion of aliens rolled back in the development of almost the Stone Age. In the movie, the artist demonstrated not only his acting skills but also his sports body.

On the stage, together with the young actor, the cast included Chloë Grace Moretz, Alex Roe, and Maika Monroe. The movie brought the creators $ 109 million. In the same year, Nick played the role of Charlie Mills, a teenager trying to cope with drug addiction in the movie Being Charlie.

In 2017, the actor's creative biography reached a new milestone after the release of a fantastic melodrama Everything, Everything. In the movie, Nick embodied the main character Olly Bright, in love with a girl next door Maddie Whittier (Amandla Stenberg), suffering from a rare form of allergies and forced to live indoors. Soon ended the filming of the comedy melodrama Krystal, in which Robinson again played a major role. The actor turned into a shy young man who fell in love with a woman with a dark past named Krystal (Rosario Dawson). To get closer to her, the hero decides to join the ranks of anonymous alcoholics, whose society is visited by his lady.

Nick Robinson calls himself a closed and extremely non-public person, so the events of personal life are not public. With the coming of popularity, the actor removed his own pages in social networks. The last account was canceled on Instagram in January 2015. But a year later, the actor recreated his profile, where today you can meet his personal photos.

Nick's best friends were actress Taylor Spreitler, who played his character's sister in Melissa & Joey, and Maika Monroe, who starred with him in The 5th Wave. At one time, the performer allegedly had an affair with a colleague Chloë Grace Moretz, but both actors left these rumors without comment. After the release of Everything, Everything fans began to talk about the relationship between Robinson and Amandla Stenberg, but the young woman refuted being the girlfriend of the actor. The actor himself mentioned in an interview that at one time, he had strong feelings for the girl from his hometown.

In 2012, the guy became the face of Cox Communications, a digital cable TV company. Robinson starred in a series of commercials. The actor considers his senior colleagues Tom Hardy, Jake Gyllenhaal, and Michael Fassbender as an example to follow. As a child, Nick was crazy about the screen star, Harrison Ford. In his dreams, the boy was imitating his favorite performer and became Indiana Jones, then Han Solo.

Every year, Robinson expands his filmography with high-profile projects. In 2018, it was the youth drama Love, Simon. In the movie, Nick played the role of a schoolboy with an untraditional orientation, who was blackmailed by his classmate.

However, Simon managed to reach an understanding with his peers without changing his own nature. Film critics welcomed the project. Together with Nick Robinson, Josh Duhamel, Jennifer Garner, Keiynan Lonsdale appeared on the screen.

In January 2019, Nick Robinson appeared in the new movie Native Son by Richard Wright. The main character of the story is a young African-American who comes into contact with the world of big business, having got a job with a wealthy entrepreneur. One of the latest projects Robinson was working on is the movie Strange but True. This is a Canadian thriller, in which Nick played the main character. In the work of the Hollywood actor 3 more projects, which are still at an early stage of the filming process.

Nick Robinson has a net worth of $3 Million.