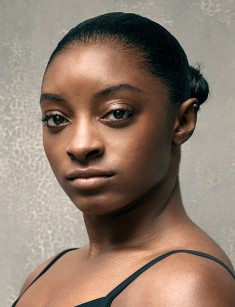 She is called the New Queen B, robot, and gymnast Surya Bonaly because her “physics” prevails over femininity. The sports element has been named after her; no athlete except for her has managed to perform it. In 2018, the movie about the young woman’s challenging way came out in the United States. Simone Biles is the first athlete who has become the world-around champion three times in a row. However, some sources say her unique victories have been made in pharmacological laboratories.

Simone Arianne Biles was born in March 1997 into the family of Shanon Biles and Kelvin Clemons. Before Shanon met Simone’s father, she had given birth to three children, and the future athlete was their third child together. The mother suffered from alcoholism and never got out of prison; the father left the family soon.

Nobody knows what the children’s lives would have been like if the grandfather Ron and his second wife Nellie Cayetano Biles had not taken care of them. The grandfather served at the United States Air Force base and later worked for the Federal Aviation Administration. The grandmother was a nurse and a former owner of a nursing home chain. Simone calls them her real parents.

For some reason, the NBC commentator Al Trautwig did not like that fact and said the woman’s foster parents were not her real parents. The public was outraged; Al deleted that twit under the public pressure and apologized.

Still, Trautwig would not be himself if he gave up his opinion. In the channel’s special profile, he emphasized that Simone and her younger sister Adria were adopted because their biological mother was an alcohol and drug abuser.

The gymnast did not escape the problem of sexism: another commentator said that Biles could perform sports elements better than some men.

At six, Biles began to do gymnastics. The girl was home-schooled and, for this reason, had the chance to practice for up to 32 hours per week. She explains the large increase in her results by this schedule. At 14, she joined the national junior team.

In 2011, Simone Biles had her first significant performance at American Classic in Houston. The agile girl won the balance beam and vault competitions; eventually, she was number three in the all-around event. Later on, guided by her “second mother” Aimee Boorman, Simone began to conquer the world of sports. In 2012, she participated in the American Classic; in 2013, the young athlete debuted in the international event: the American Cup.

At that time, Biles received an invitation to the training center of Béla and Márta Károlyi, the famous Karolyi Ranch that had been “producing” high-skilled athletes since 1980s. This center in Houston is considered the world’s leader; Nadia Comăneci, Julianne McNamara, and Mary Lou Retton came from there.

Biles also trained there. She became the first black champion in all-around gymnastics. In a couple of years, Simone won three all-around gold medals which brought her the recording ten medals in the international competitions. Thus, the gymnast proved the principle of the Károlyi’s work: only the top results.

The American national team focuses on muscle strength which helps in vault and floor; however, it is almost useless for the balance beam. In Rio, Biles won only the bronze medal in this discipline.

Experts believe that American gymnasts may be defeated in the uneven bars. Only Aliya Mustafina could compete with the Final Five. As journalists say, when it comes to the floor exercise and Simone appears, the competition is actually over. The videos demonstrating Biles’s phenomenal strength have millions of views on YouTube.

In 2016, Simone Biles and the basketball player LeBron James were named the Athletes of the Year. The reputable agency Associated Press founded the title; the Olympic champion got the award for the revolutionary changes in gymnastics and new achievements.

As the WADA database leaked to the Internet, it turned out Simone was permitted to take doping medicaments. The athlete wrote on her Twitter page that she had been diagnosed with the attention deficit hyperactivity disorder and took the medication for that reason.

According to Roman Abzhelilov, the doctor of the CSKA basketball team, the American medics made their job easier and reached the diagnosis explaining all the problems. More than that, the medicines that Biles was prescribed were actually drugs, and their intake was to be restricted: if they were taken for a long period, they produced side effects including stunted growth.

In 2017, the gymnast revealed the name of her boyfriend: it was the gymnast from Michigan Stacey Ervin Jr. who had won bronze medals at the USA Gymnastics National Championships and won the National Collegiate Athletic Association Championships.

Simone is an open and direct woman; she can make jokes about her height and posts photos on Instagram where she poses with her friends or other athletes, and she is only waist-high to them.

Biles loves Italian cuisine; she likes to go shopping, meet her friends, swim, and play with her German shepherds in her spare time. Pretty Little Liars, Make It or Break It, and Toddlers & Tiaras are her favorite shows.

In fall 2017, Simone renewed training with the new coach Laurent Landi; her previous coach, Aimee Boorman, moved to Florida and became the CEO at Evo Athletics.

The four-time Olympic champion was involved in the anti-harassment campaign: the woman accused Larry Nassar, the former American Gymnastics national team doctor, of molesting; she was underage at that time. Young artistic gymnasts were complaining about him, but nobody paid attention.

In 2016, Indianapolis Star journalists took a special interest in this issue, and it was impossible to keep the secret. As the reporters discovered, the doctor was molesting the young athletes for 20 years under the guise of a medical examination. 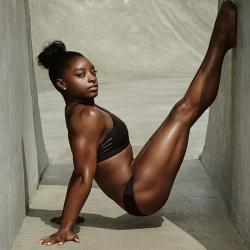