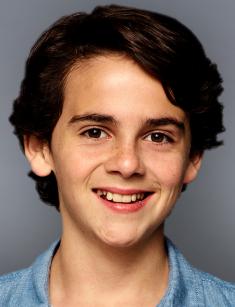 September 2017 was marked with a significant event in the modern cinematography: the second version of the novel It by the horror master Stephen King was released. The Argentinian director Andrés Muschietti created this movie together with Warner Bros. studio. The mini-series made in ABC studio was the first screen adaptation; it was not so cruel in terms of effects and brutality.

The movie conquered people of all ages. The cast of the project consisted of the teenage actors who had just taken the first steps in show-business. The actor Jack Grazer was one of them. It was his sixth and most successful work that made the young man famous all over the world.

Jack Grazer was born at the beginning of fall 2003 in Los Angeles where Hollywood stars were born. The boy’s parents, Gavin Grazer and Angela Lafever, had nothing to do with cinematography. However, Jack had an example to follow: his uncle, Brian Grazer, was a famous producer who worked in this sphere for 35 years and received the Academy Award for Best Picture for the melodrama A Beautiful Mind. The man was also nominated for this prize three times as a scriptwriter and producer.

Jack wanted to build a brilliant movie career like his uncle from early childhood. The artistic boy debuted in an amateurish performance when he was an elementary school student. Soon, TV producers noticed the talented kid who did not feel awkward when hundreds of people were watching him. The parents and the uncle supported Jack and gave him many recommendations.

The American audience got acquainted with Jack Grazer in 2014: the actor debuted in the comedy series The Greatest Event in Television History by Adam Scott and played the main character’s son. Paul Rudd, Gillian Jacobs, and Catherine O'Hara (Kevin’s mother in the Christmas comedy Home Alone) starred in the series.

The beginning was successful. The next year, the 13-year-old boy appeared in Comedy Bang! Bang! by Benjamin Berman. Jack was given the role of Kayden Aukerman.

In 2015, the teenager appeared in an episode of the 90-minute horror Tales of Halloween. The movie consists of ten novellas united by the same theme: celebrating Halloween. The premiere took place in October 2015. Grazer personified a young stranger who walked the night street at the worst time.

When the artist tuned 14, he became famous for the 2016 fantasy Scales: Mermaids Are Real by Kevan Peterson. However, international recognition came with the next project, the horror It based on the first part of the novel by Stephen King. Jack Grazer played Eddie Kaspbrak.

It is the story about seven school children who organize The Losers Club; they are outcasts among peers. Every member has something that made them a misfit: a nerd, a Jew, a redhaired girl, a glasses-wearer, a black, and an overweight. The teenagers’ stories of discrimination are sad: high-school students bully them, and their families bring more trouble than support. The outcasts unite to survive in their hell.

The unknown evil terrorizing the town makes the company even closer. The dancing clown Pennywise (Bill Skarsgård) horrifies citizens of Derry, Maine. Children disappear, and their bodies are found dead and disfigured; the police are helpless. Alone, the Losers Club fights the evil.

Jack Grazer, Sophia Lillis, Jaeden Lieberher, Finn Wolfhard, Wyatt Oleff, Jeremy Ray Taylor, and Chosen Jacobs played the main characters. The first weekend after the premiere, the horror grossed at $50 million. The project paid off in a week: the budget was some $35-45 million. In September, the movie broke the records and became the top-grossing movie in the history of the studio. The young actors found themselves incredibly popular.

The international results were splendid. In Rotten Tomatoes, the movie rating is 84%.

At the end of September 2017, the movie company announced that the second part of the novel would be presented in September 2019. The director Andrés Muschietti shared some details: the story would show the events that happened 27 years later.

Similar to other young actors, Jack Grazer participated in the new movie. The grown-up characters will remember their childhood, and The Losers Club will appear in flashbacks.

Working on the movie, the young artists became close. Jack’s Facebook and Twitter pages are getting more and more popular, and the number of followers is increasing every day.

Jack Grazer, Finn Wolfhard, and Wyatt Oleff are good friends in actual life. The teenagers have a rest together and play tricks, sometimes, at work. The artists post their pictures on Instagram.

Jack Grazer’s height is 5.25 ft. (160 cm.); his weight is unknown. The young man has expressive brown eyes and a sincere, baby-like smile. Some of Jack’s and Finn’s fans suspect that the teenagers have romantic feelings to each other; however, they are likely to be imagining things.

Grazer likes to surf; he often does it with his friends. The actor loves to record stories for Instagram. He has an original manner in his style: wearing a baseball cap backward.

In 2017, the actor’s fans had the chance to see their favorite in Me, Myself & I; the artist played 14-year-old Alex in the 1990s. The movie was premiered at the end of September. It is a funny story about three life stages of the same man, Alex Riley.

Bobby Moynihan played 40-year-old Alex, and John Larroquette personified him at the age of 65.

Nowadays, the actor is quite popular; he is busy with new projects. The 2018 drama Beautiful Boy where Jack took the role of 12-year-old Nic Sheff is one of his recent works.

Jack Grazer has an estimated net worth of $500 thousand, but, the amount is still under review. As known, he earns the salary of $10k per episode.