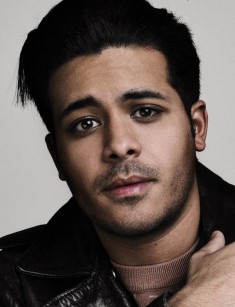 Christian Navarro is a young American actor who starred mostly in TV series. Christian became famous for one of the leading roles in the drama series 13 Reasons Why.

Christian Lee Navarro was born in Bronx, New York, on August 21, 1991. Although Christian is Puerto-Rican, he is an American citizen. Navarro’s family has two children, the boy grew up with his younger sister, but there is no accurate information about her name on the Internet. According to some sources, the girl's name is Leeann Madisyn Navarro; others claim that Leeann is a middle name, and the first one starts with the letter "C."

Christian does not tell about his parents, but he said in an interview that the mother and father helped to develop his acting career and always supported him. According to the man, it was his father who made him who he was. Navarro showed interest in the stage in childhood and often participated in school productions.

During his school years, the boy experienced both sides of teenage life. At first, he was bullied in elementary and secondary schools. The young man realized that he needed to become a bully to change this attitude. Later, Navarro did not mind mocking weaker children for some time. However, when it was the time to transfer to high school, he switched schools and learned to build relationships with classmates not to be a victim or a bully.

Christian began his acting career with commercials. The actor got the first roles in films. In 2005 he starred in the zombie horror film Day of the Dead 2: Contagium, and in 2009 in the movie Run It. The roles were secondary, and the projects were not highly-rated.

Until 2016, the actor was satisfied with bit parts in the TV shows Taxi Brooklyn, The Affair and Rosewood. Later, he appeared in four episodes of the HBO drama series Vinyl.

The first prominent role in the high-rated TV series was the role of Tony Padilla in the Netflix TV series 13 Reasons Why released in 2017. Detective drama series tells about the consequences of the suicide of a young girl. Hannah Baker (young actress Katherine Langford), cuts her wrists in a hot tub after recording 13 cassette tapes telling about the reasons. Unexpectedly, the title hero, Clay (Dylan Minnette), has become one of these reasons.

The series, showing teenage relationship problems, as well as the seamy sides of life, attracted young viewers. Christian’s charismatic hero also has a large number of fans. Thanks to his manner of speaking short and concise phrases, as well as calling everyone to prudence, Tony got the nickname “unhelpful Yoda," and the fans of the series liked it.

One more feature is that Tony Padilla is a homosexual character in the series. Moreover, the actor does not show any peculiarities of people belonging to sexual minorities. The behavior and manners of the young man are no different from those of heterosexual men. This news was surprising even for Clay, who communicates with Padilla a lot. The success of the series led to its continuation. In 2018, the second season was released, and a new one was announced.

At the same time, Christian played a bit part in the parody series The Tick, and in 2018 he began shooting in the biographical film Can You Ever Forgive Me?. The film tells the story of literary forger Lee Israel, who forged letters from celebrities because of lack of money.

As soon as the character revealed his sexual orientation, the actor’s fans began to assume that Christian was gay. He made it clear in an interview that it was not true. However, Navarro hides his personal life, and there are still rumors about the actor’s homosexuality.

For a while, fans considered that Christian had a love affair with Shazi Raja, an actress of Pakistani descent. Navarro posted photos with the girl on his Instagram page. However, neither the actor nor Shazi officially confirmed this information.

There was misleading information about Christian on the Internet. Many sources claim that the man was married to actress Traylor Howard. The information is very absurd because Traylor is much older than Navarro. Moreover, they say that the couple was married from 2003 to 2006 when Christian was still a child.

The reason for the error is simple. During this period, Traylor was indeed married to Christian Navarro, an actor's namesake, and a famous sommelier. Now the actor does not have a wife or children.

Viewers discuss one feature of Christian's character. Tony Padilla is the only title character who has tattoos. The American viewers were embarrassed by this fact because the hero was under 18 years of age, and it is forbidden at that age to make tattoos without parental consent in Northern California. It is unlikely that Padilla's father would allow it.

In the end, fans thought that it was Christian who had tattoos. The actor’s photos confirmed this information. However, Tony is a mysterious character, and there is still a lot of unknown details about him. The creators of the series looked for an actor with tattoos for this role on purpose.

Christian's passion is martial arts. Thanks to the training the actor has an excellent figure. His height is 170 cm, and the weight is 70 kg. One can see his muscles in the photos.

Christian is busy filming in the series 13 Reasons Why because the third season will be released in April 2019. In addition to acting, the man is interested in music. He and singer Evangelia recorded the song “Hello Again" on behalf of his character as if Tony had written a letter to Hannah.

Navarro has an Instagram account, where he has millions of followers. Christian treats his fans with respect and regularly thanks them for their support and attention. Earlier, the actor wrote a lot of messages on Twitter, but as of 2018, the links to the actor’s microblog do not work.

The man considers the work in 13 Reasons Why to be very important due to the coverage of the teen suicide problem because of school bullying. According to the actor, many young people have written to him because the series helped them to cope with their problems. 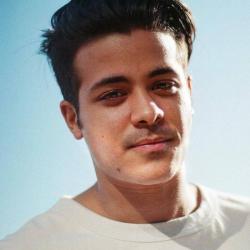